A man is dead following a shootout with California police at a gas station Friday.

The San Luis Obispo Police Department responded to reports of shots fired at a Vons gas station in Nipomo, California at about 11.15am.

The suspect ‘was firing indiscriminately, so he was firing at moving vehicles, he was shooting all over the area. We aren’t exactly sure why at this time,’ a police spokesperson said, according to The Tribune.

Police said they are not identifying the suspect until his family has been notified.

The police spokesperson said that when sheriff’s deputies arrived at the scene, they ‘engaged the active shooter,’ leading to his death.

San Luis Obispo Police Department responded to an active shooter situation that began at about 11.40am. Police are pictured at the scene of the shooting Friday

Police are seen gathered at the Vons gas station in Nipomo, California, Friday

Police tweeted at 12.50pm that the suspect was dead following the shooting with deputies and officers from California Highway Patrol.

Police added that there was ‘no known threat to public safety’ and were determining if anyone was injured at the scene.

It’s unclear what time the shooting took place and whether the suspect died on the scene or if he had been taken to the hospital. 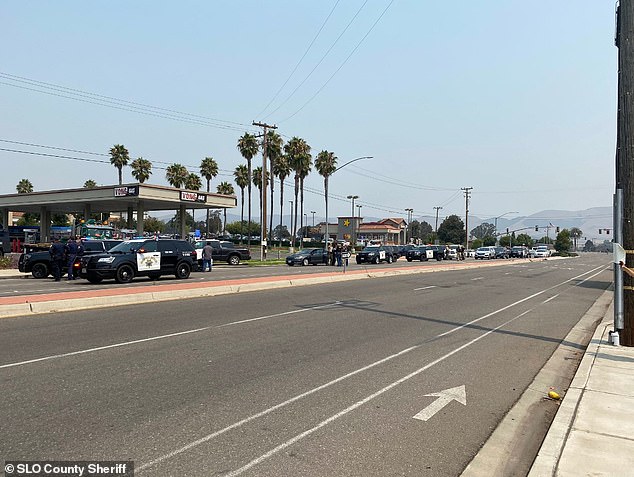 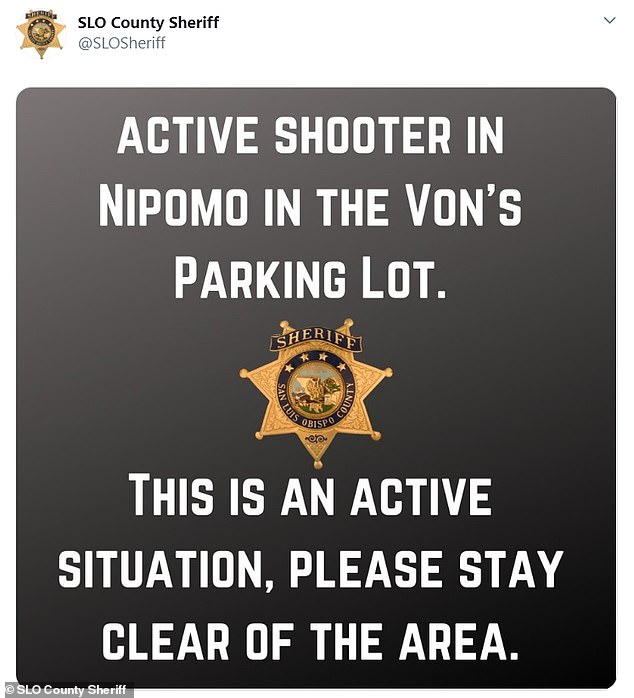 Police warned people to stay away from the scene and at 12.50pm said the shooter was dead

Police said that the suspect had a handgun and it’s unknown whether he had any additional weapons.

Witnesses told KSBY the shooter had fired between seven to eight shots after an altercation at the gas station.

At about noon, police scanner traffic indicated that a woman, who was believed to have been with the shooter, but was reported to have fled the scene, was taken into custody, The Tribune reported.

It’s unclear what, if any, relationship the woman had with the shooter.