Variety star Kenny Lynch who had top 10 hit with Up On The Roof and became a TV game show regular has died aged 81 as family say: ‘Bye dad, we will love you always!’ 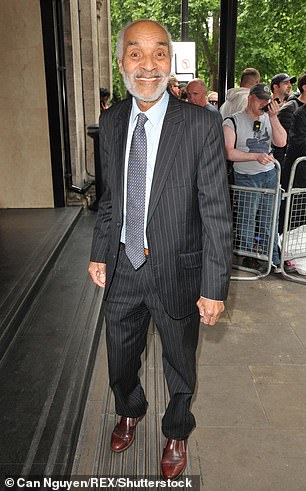 Actor and singer Kenny Lynch who rose to fame singing and performing in variety shows in the 1960s has died today aged 81.

Lynch, who was one of few black singers in British pop music at the time, had two top ten hits with Up On The Roof and You Can Never Stop Me Loving You.

He also performed with The Beatles on their first UK tour in 1963 and covered their song Misery, from the band’s debut album Please Please Me.

But Lynch had more success as a songwriter, being behind the likes of Sha La La La Lee by the Small Faces and Cilla Black’s Love’s Just A Broken Heart.

Lynch, who was born in Stepney, East London in 1938, also appeared in nine films – most recently in 2007 crime thriller The Riddle, alongside the likes of Vinnie Jones and Derek Jacobi.

His family revealed he died early today and thanked staff at the NHS and palliative care charity Sue Ryder for their support.

They tweeted: ‘Saddened to share this news with you all. Sadly our dad passed away in the early hours this morning. He will be remembered and missed by many.

‘We would like to say a massive thank you to the NHS and the people at Sue Ryder for all their support. Bye Dad, we will love you always!’