Sadie Frost shows off her ‘secret fifth child’: Actress reveals for first time how youngster she met in Africa 15 years ago ‘calls her mum’ after she put him through school and college

She already has four children from her marriages to actor Jude Law and Spandau Ballet’s Gary Kemp.

But now film producer Sadie Frost, 53, has revealed she has a ‘secret fifth child’ in a post to social media.

The gatekeeper of the famous Primrose Hill set praised 25-year-old Lucky Mthembu for being ‘incredible’ alongside a topless image of him on Instagram.

She met Lucky in an African orphanage when he was ten years old.

She said ‘he is my 5th child’, ‘he calls me mom’ and  ‘I love this boy’ alongside revealing she had paid for his education and put him through film school. 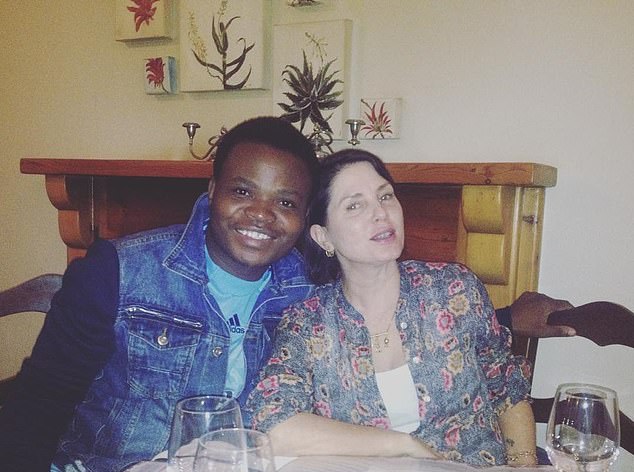 With four children from her marriages to actor Jude Law and Spandau Ballet’s Gary Kemp, it could never be said that film producer Sadie Frost didn’t have her hands full

She wrote: ‘This is my Lucky who I met 15 years ago. I put him through school and now college.

‘He is my 5th child. He studied at film school and is an incredible director of photography. He calls me mom. I love this boy.’

The pair are now making a film together with other children from his orphanage and already have a director and most of the finance.

She added: ‘The exciting thing is we have been writing a script and now we have a director, most of the finance and getting a great team.

‘It’s so exciting to give him and the other kids at the orphanage this opportunity.’

Lucky responded calling Sadie a ‘beautiful human indeed’ and ‘the best mommy in the world’ before saying ‘I love you’.

He said: ‘Thank you so much, you are such a beautiful human indeed.

‘I know the people you met back in South Africa can’t forget about your compassion towards others, your tenderness towards the broken and generosity to those in need.

‘You my guardian Angel, when I needed a mother, alone and desperate you pulled through.

‘Distance didn’t matter, your family has given me love ever since. ‘I am happy that you gave chances, and I never wasted them… Because I know hard you work

‘Best mommy in the world. The visits, the spoils. I love the kids, I Love You.’

It comes just months after the mother admitted she was ‘ready’ for her four biological children to move out of the family home in February.

The actress revealed with Finlay, 28, Rafferty, 22, Iris, 18, and Rudy, 16 slowly emptying the nest, she feels relieved at having her own space after ‘worrying about domestic stuff for over 30 years’.

Speaking in an interview with The Times, she said: ‘You know what? I’m ready for it. I love being a mum, but by the time Rudy leaves I’ll have been worrying about domestic stuff for over 30 years and it will be my time.’

Sadie was previously married to Spandau Ballet guitarist Gary Kemp, 59. The couple married in 1988, welcomed son Finlay in 1990 and divorced in 1995.

They had three children together before divorcing in 2003.

Finlay is a DJ and a member of the band Rivrs, while Rafferty and Iris are models.

Sadie has been dating boyfriend Darren Strowger for six years.