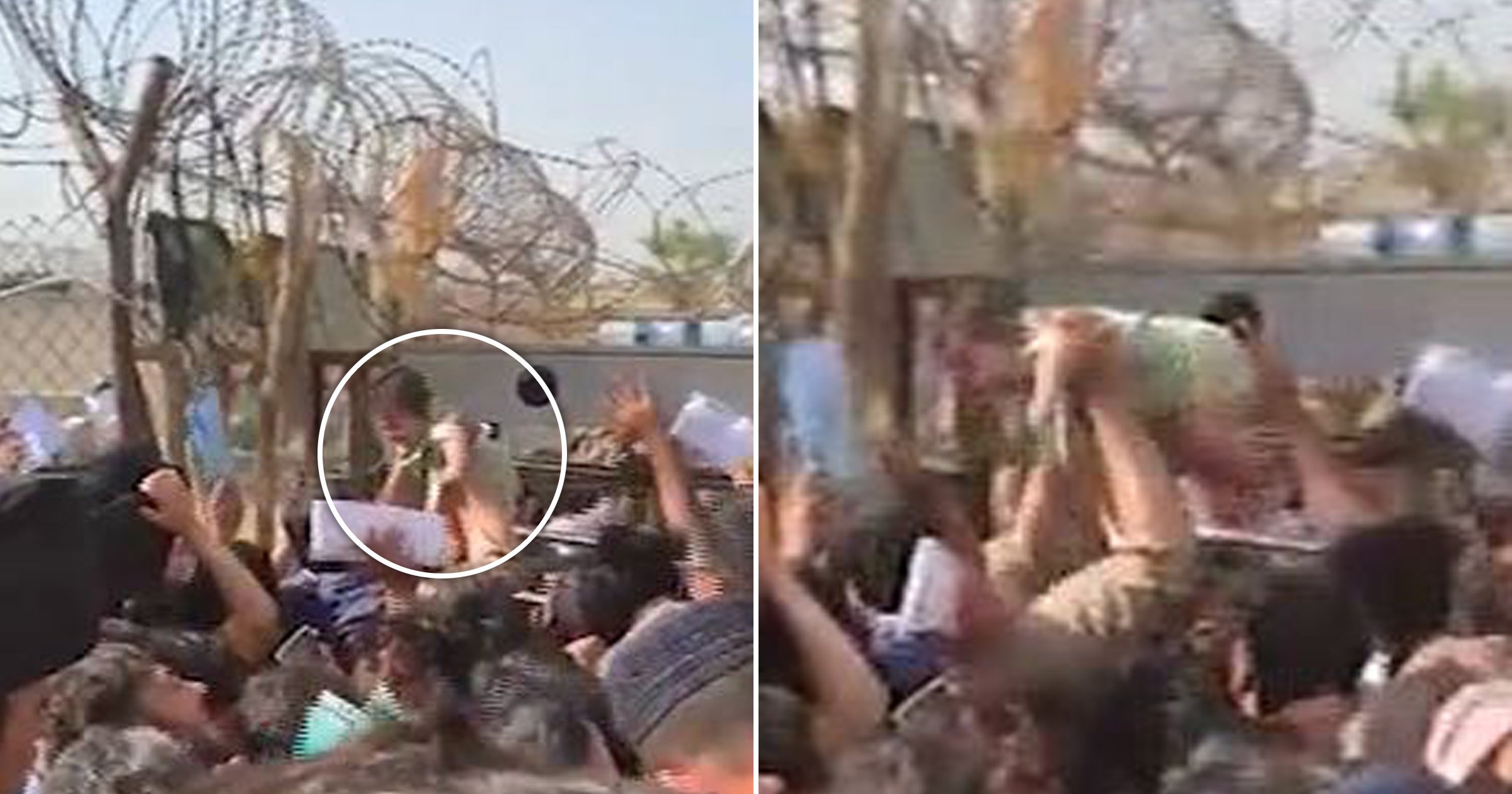 Desperate Afghan mothers threw their babies over barbed wire at Kabul airport as they begged British paratroopers to take them to safety.

Violent scenes have unfolded at one of the routes to Hamid Karzai International as people try to escape a future under the militant group.

The entrance to the Baron hotel has become the focal point where Afghans seeking refuge in the UK have been gathering in the hope of being airlifted to safety.

It is guarded by Parachute Regiment troops.

One officer told the Independent: ‘The mothers were desperate, they were getting beaten by the Taliban.

‘They shouted, “save my baby” and threw the babies at us.

‘Some of the babies fell on the barbed wire. It was awful what happened.

‘By the end of the night there wasn’t one man among us who was not crying.’

The UK is currently evacuating British citizens and Afghans who worked for the government during the 20-year-war.

The route to the Baron Hotel also leads to the facilities of other countries which are carrying out evacuations, and the numbers of those desperate to get away are growing by the day as even those without paperwork beg to be airlifted to a place of safety.

A senior officer confirmed the harrowing scenes to Sky News.

He said: ‘It was terrible, women were throwing their babies over the razor wire, asking the soldiers to take them, some got caught in the wire.

‘I’m worried for my men, I’m counselling some, everyone cried last night.’

The government has come under fire for not acting fast enough to save those in danger of reprisals by the Taliban, who took Kabul on Sunday.

The Taliban’s promise of ‘safe passage’ to the airport have been undermined by reports they are beating and whipping women at checkpoints set up by the militants and preventing Afghans from leaving.

The British ambassador Sir Laurie Bristow said around 700 people flew out in the emergency British airlift on Tuesday.

He said: ‘We are trying to scale up the speed and pace over the next couple of days. We will put everything we can on this, trying to get out everyone who we need to get to safety as soon as we can.’

MPs have warned that Afghans fleeing the Taliban risk being ‘executed’ if Britain waits years to give them refuge. They savaged Boris Johnson for only taking 5,000 this year, with sanctuary offered to 20,000 others over five years.

MPs from all sides have urged the PM to make the resettlement scheme as generous as possible.

Despite the Taliban’s recent publicity drive, there are fears that human rights, particularly for women, will be stripped away under the new regime.

Multiple reports point to abuses throughout Afghanistan, including women being shot for not wearing the burka.

At least three people are thought to have been killed after militants opened fire on a crowd of protesters demonstrating in the eastern city of Jalalabad.