Singapore: Afghan refugees stranded in Indonesia are contemplating boarding boats to travel illegally to Australia as chaos descends on their homeland.

While the Taliban’s swift takeover of Afghanistan has triggered a new humanitarian crisis there, growing desperation among the thousands who have already fled the country is reaching breaking point. 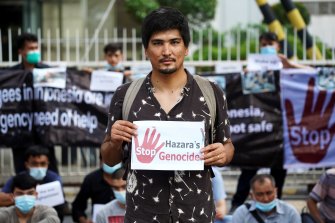 Mahdi Alizada, from Afghanistan, spent five years in a detention facility on Borneo and is now a refugee representative. Credit:Jefri Tarigan

“If the Australian government, and Canada and America and New Zealand, don’t change their policy in a good way to refugees in Indonesia and they don’t increase the numbers of refugees to their countries, there might be refugees trying to come to Australia by boat illegally,” Mahdi Alizada, a Hazara refugee from Afghanistan who is director of the Refugee Community in Indonesia (RCI) representative group, told The Sydney Morning Herald and The Age on Monday.

“There are some numbers of refugees, I have contact with them, they’re trying to provoke the people to collect together, make a decision and to move to Australia by boat.

“I disagree with this but there is too much pressure, people lose their hope and now they worry more about families in Afghanistan.”

More than half of the 14,000 refugees stuck in Indonesia are from Afghanistan and most of that group are Hazara, an ethnic group that has faced persecution by the Taliban.

They face plummeting resettlement rates to third countries including Australia which admitted only 66 of them in the year before the pandemic and won’t take any who registered after July 1, 2014 due to a rule introduced as part of Operation Sovereign Borders.

Indonesia has for decades accepted asylum seekers but the rights afforded to them are limited – Jakarta is a non-signatory to the 1951 Refugee Convention and the 1967 Protocol on refugees.

Mehran Haydari, an Afghan Hazara refugee from Ghazni who arrived in Indonesia in 2017, said the inability to work and study weighed heavily on the refugee community, which has experienced a spate of suicides since mid-2020.

“It’s better to at least try what you can. [It’s] better than committing suicide,” he said.

“Maybe you can go to Australia by boat … even if the government of Australia doesn’t let them into their country, it’s better that they have to die once inside the water instead of dying in Indonesia.”

The office of the Minister for Immigration Alex Hawke has been contacted for comment.

The Taliban’s reclaiming of power appears to have ruled out once and for all the remote possibility the refugees could one day return home.

It has also prompted a new surge of people trying to flee Afghanistan with thousands crowding onto the tarmac at Kabul airport on Monday and 20,000 to 30,000 a week leaving through informal channels, according to the UNHCR.

Evan Jones, an Australian who is co-ordinator of the Asia Displacement Solutions Platform, said most would be headed across the border to Iran, which like neighbouring Pakistan, already hosts about 1 million Afghan refugees and a further 1 million to 1.5 million registered asylum seekers.

While Turkey and Europe are potential onward destinations for them, Jones said that, with significant Afghan populations in Indonesia and Malaysia, “it wouldn’t be a surprise should people decide to move in that direction”.

“I don’t think everyone will move. I don’t think we want to scare monger or anything like that,” said Jones, who was based in Kabul but flew out last Friday. “But I also think being realistic, there will be a number of people who will move. And what does that mean as well for Australia? Will people be thinking about travelling onwards even further?” 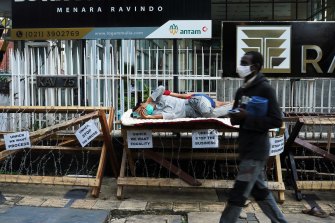 Refugees in Indonesia protest outside the UNHCR headquarters in Jakarta in May.Credit:Jefri Tarigan

Human Rights Watch Asia Deputy Director Phil Robertson said there was little doubt the Taliban’s victory would cause a huge outflow of refugees to Pakistan and throughout the region.

“The UNHCR and governments around the world need to urgently help these refugees by setting up systems that offer protection and guarantee respect for their rights, including Australia which has treated Afghans fleeing by boat so shabbily in the past,” he said.

“There’s no doubt this crisis will be the real test of the Asian commitment to uphold international standards in protecting refugees.”

The US State Department on Monday released a statement co-signed by dozens of countries including Australia calling “all parties to respect and facilitate, the safe and orderly departure of foreign nationals and Afghans who wish to leave the country”.

“Afghans and international citizens who wish to depart must be allowed to do so; roads, airports and border crossing must remain open, and calm must be maintained,” the statement said.

Right now the situation is dire, said Caroline van Buren, the Kabul-based representative for the UNHCR, which is particularly concerned for the plight of women and girls.

“We’re getting reports that women who are fleeing are giving birth on the road, without any medical assistance,” she told CNN. “The information that we have now is that women and children are almost 50 per cent of the civilian casualties.“

The UNHCR says more than 400,000 people in Afghanistan had been forced to flee their homes since the start of May, joining 2.9 Afghans who were already displaced at the end of last year.

“While the full impact of the evolving political situation is not yet clear, we are witnessing large-scale displacement amid what is now a humanitarian emergency,” said Catherine Stubberfield, the UNHCR’s regional spokesperson for Asia and the Pacific.

“The vast majority of people, without passports and visas also have no regular way to flee outside Afghanistan unless borders remain open,” the refugee agency said.