London: Royal courtesies concluded, Donald Trump was due to get down to business in the UK on Tuesday, with his program including plans for a post-Brexit trade deal and a confrontation with Theresa May over Huawei’s future role in Britain’s 5G mobile network.

The US president enjoyed the best of British pageantry on Monday, culminating in a state banquet at which Trump had a “lizard of Oz” moment, his hand straying close to the Queen’s back in a move that had locals remembering Paul Keating’s faux pas in 1992. 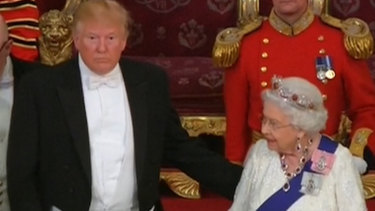 Donald Trump appears to have broken royal protocol by touching the Queen on the back.Credit:ninevms

But the Queen seems more relaxed about such moves these days – Michelle Obama got away with it in 2009 – and it is not absolutely certain if the apparent pat on the back made contact.

The more important gestures of the evening were verbal: a delicate diplomatic dance in which Trump’s hosts challenged his perceived isolationist instincts.

As guests digested their new season Windsor lamb, the Queen spoke about how this week’s anniversary of D-Day was a reminder of the global institutions founded in the wake of war.

“After the shared sacrifices of the Second World War, Britain and the United States worked with other allies to build an assembly of international institutions, to ensure that the horrors of conflict would never be repeated,” she said.

“While the world has changed, we are forever mindful of the original purpose of these structures: nations working together to safeguard a hard won peace.”

It was a reasonably unsubtle hint to a president who has challenged the bonds of the NATO alliance and the United Nations.

“I am confident that our common values and shared interests will continue to unite us,” the Queen said.

In his speech Trump praised the Queen’s “truly remarkable reign” – she has met 13 US presidents. And he spoke of their two countries’ shared values of “dignity, duty and patriotism”.

UK Prime Minister May also gave Trump a welcome gift with a message: a framed, typescript draft of the Atlantic Charter, signed by Winston Churchill and Franklin Roosevelt in 1941 setting out common goals of freer trade, disarmament and the right to self-determination of all people.

It was a convivial end to a day that began in controversy, with Trump reigniting his Twitter spat with London mayor Sadiq Khan. The latter had likened Trump to 20th century fascists in a Sunday newspaper column; Trump responded by calling Khan a “stone cold loser” and mocking his height.

Another potential awkwardness was glossed over: the Duke of Sussex was noticed to be steering clear of Trump during their moments on camera at Buckingham Palace. On the weekend Trump had called his wife Meghan “nasty”, when told she had previously called him divisive and misogynistic. 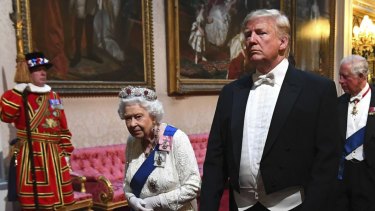 The Queen and US President Donald Trump arrive through the East Gallery ahead of the State Banquet at Buckingham Palace.Credit:AP

On Tuesday morning Trump was due to meet Theresa May and business leaders from ten companies – five from each country – at St James’ Palace to discuss “sectors where expanding our cooperation further could benefit both sides”, according to a note from Downing Street.

May was expected to tell the meeting that a post-Brexit bilateral free trade agreement between the countries would make “businesses more competitive and create jobs, opportunity and prosperity for all our people”.

On Monday Trump tweeted: “big Trade Deal is possible once UK gets rid of the [EU] shackles. Already starting to talk!”

The Duke of York, UK Chancellor Philip Hammond, US Secretary of State Mike Pompeo and Ivanka Trump were expected to attend the roundtable, as well as the heads of companies including aerospace company BAE, pharmaceutical giant GSK and investment banks JP Morgan and Goldman Sachs. 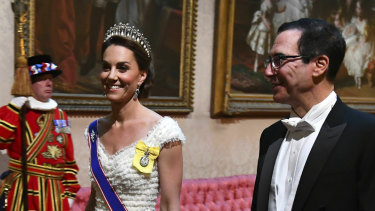 Kate, the Duchess of Cambridge and United States Secretary of the Treasury, Steven Mnuchin arrive at the State Banquet at Buckingham Palace.Credit:PA

However progress will be hampered by the large uncertainty that hangs over Brexit – and the fact the UK government will look very different in just a few months, with a new leader and Cabinet, even if the Brexit crisis doesn’t trigger an election.

The White House were reportedly unimpressed by an invitation to a bilateral meeting with May, and it was understood at least one other senior Cabinet minister would be present at their discussions at Number Ten on Tuesday.

At that meeting May was expected to rebuff Trump’s demands to completely block Chinese mobile company Huawei from the UK's 5G network. According to leaks and hints from Number Ten, the UK is set to allow Huawei equipment in “non-core” areas of the network, believing this poses no threat to national security.

However no final decision has been announced.

No 10 was also expected to urge the White House to take climate change more seriously, and recalibrate its approach to Iran.

Tuesday was also expected to feature large protests in central London, with the ‘Trump blimp’ due to make a comeback.

Opposition leader Jeremy Corbyn was expected to address the protesters in Parliament Square.