Campaigners want leading carriers such as Jet2, easyJet, Ryanair and Flybe to do more to stop drunken passengers disrupting flights.

The Civil Aviation Authority claims there are 400 drink-related incidents each year – but airline data puts it at 10 times that number. 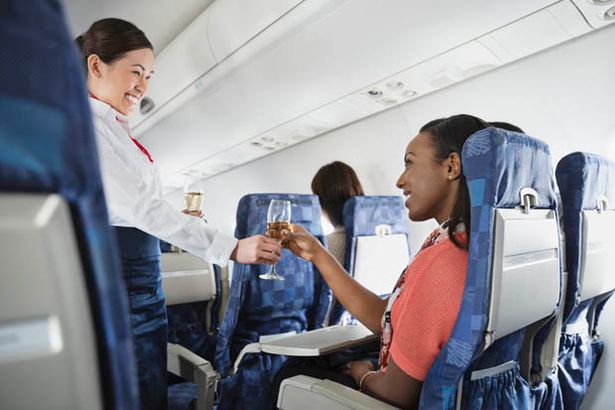 Teisseire is a French manufacturer of flavoured syrups. The airline sells 200ml bottles of Italian Rosé Freixenet Prosecco at £6.50 with syrups £1 each.

The low-cost carrier also offers two-for-£8 bulk deals on spirits like Smirnoff Vodka and Gordon’s Gin, and a similar deal on beers.

Critics say the promotion of mixers or syrups alongside alcoholic drinks and “buy in bulk” offers encourages passengers to consume more.

It comes despite a series of incidents of alcohol-related violence and disruption on flights operated by Jet2. In May, Spanish police had to haul 14 drunken passengers off a Jet2 plane after it touched down at Majorca’s Palma Airport from Edinburgh after problems on a flight.

Former travel agent David Bilcharz was jailed for shouting abuse at an air stewardess and leaving children in tears during a two-hour alcohol-fuelled rant on a Jet2 flight from Antalya in Turkey to Manchester.

Elsewhere, EasyJet was found to be encouraging customers to “upgrade to a premium spirit and mixer” on 7am flights leaving UK destinations such as London’s Gatwick Airport.

The breakfast drink offer means passengers can upgrade to stronger brands such as Hendrick’s Gin (41.4%-44%) for £7 a time, while standard gin costs £6.

In April it was reported Spanish police had to remove an entire British football team from an easyJet flight for being “drunk and disruptive”.

Which? Travel Editor Rory Boland said: “Airlines must also take more responsibility for preventing passengers from having too many drinks.”

An easyJet spokesman said: “Any passenger under the influence of alcohol will be refused alcohol.”

The other airlines did not respond to requests to comment.