EXCLUSIVE Albania agrees to take back its criminals: Fifty prisoners will be sent back to Tirana in January to serve out the remainder of their sentences in landmark ‘goodwill gesture’

Albanian criminals in British jails are to be sent home to serve out their sentences in a New Year goodwill gesture by the Tirana government.

Fifty prisoners have already volunteered to be transferred from British to Albanian prisons as part of the new deal.

The first ten men are expected to be deported by charter plane in cell-to-cell transfers during the first few weeks of January, The Daily Mail can reveal.

It is a ‘first step’ by the two nations towards the routine removal of hundreds of imprisoned Albanian criminals, saving millions of pounds of UK taxpayers’ money and making space in overstretched jails. 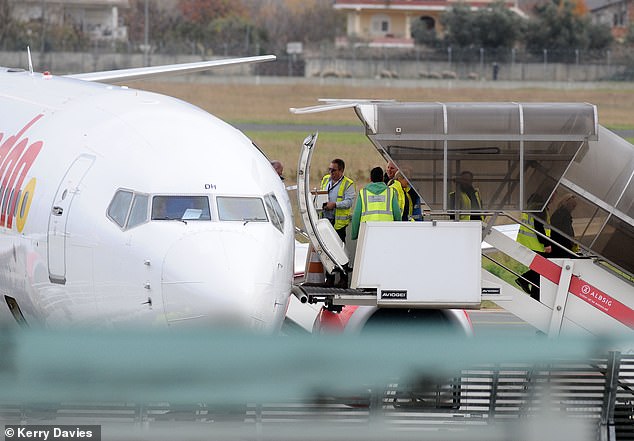 All the prisoners sent home will serve the full sentence imposed on them by UK judges.

Up to now, Home Office deportations to Tirana involved either criminals who have finished their UK sentences or people who were in Britain illegally, often after crossing the Channel in small boats.

An Albanian government source said yesterday that intensive talks between Britain’s Ministry of Justice and Albanian minister Ulsi Manja, have led to a pact over the first prison transfers.

‘We have limited capacity in our prisons. But to show we are ready to fulfil our obligations to the UK we have agreed to receive 50 Albanians who have expressed a willingness to return,’ the source added.

Albanian nationals represent around 10 per cent of foreigners held in English and Welsh jails. At the last count there were more than 1,336, the highest number of overseas criminals behind bars.

Although the first batch of deportees have agreed to be returned, the Albanian-UK deal states that prisoners can, in future, be transferred without their consent.

Court judgements for those earmarked for removal have been sent to Tirana because the pact says Albania must receive assurance their punishment fits their crime before the green light for travel is given. 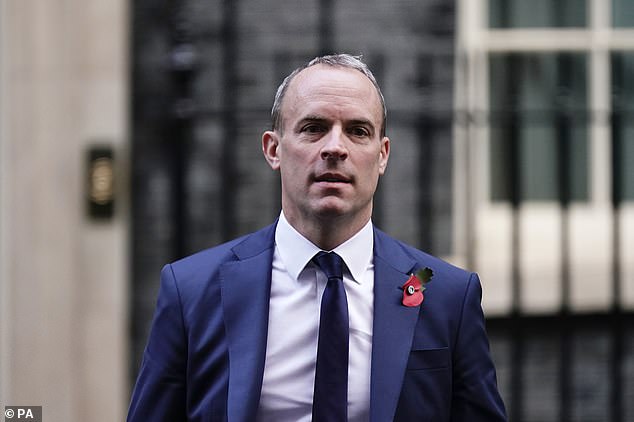 An Albanian government source said yesterday that intensive talks between Britain’s Ministry of Justice and Albanian minister Ulsi Manja, have led to a pact over the first prison transfers

The initial ten removals are expected to take place in the first weeks of 2023.

The scale of potential savings to Britain are huge.

Albanians serving the longest sentences in prison include two murderers and three drugs kings who are currently serving a total of 143 years – at a cost to the public purse of £6,864,000 in present prices, without taking account of future inflation.

He bludgeoned Sabina Nessa as she walked through a London park in September 2021 and was later imprisoned for 36 years. 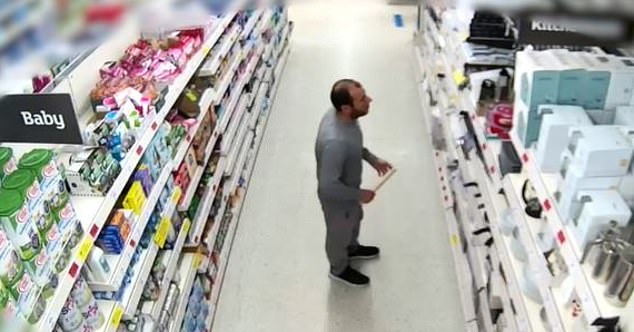 The convicted killers include former garage worker Koci Selamaj, 37, serving the longest sentence among the 1,336 Albanian inmates. He will serve 36 years after bludgeoning Sabina Nessa to death as she walked through a park 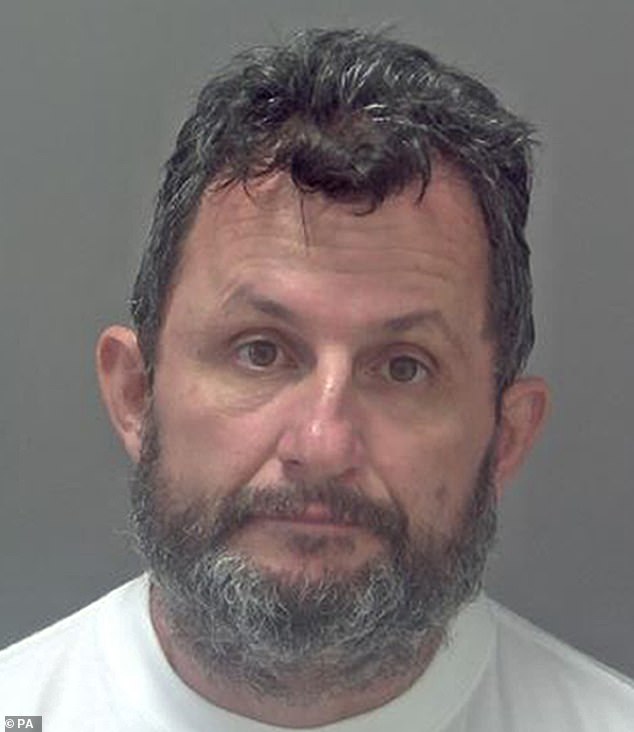 Murderer Ali Qazimaj, 48, is serving 35 years for killing Peter Stuart, 75, in 2017. All criminals who are deported will serve their entire sentences, as handed down by UK judges

Another murderer, Ali Qazimaj, 48, from Tilbury, Essex, was sentenced to 35 years in 2017 for killing Peter Stuart, 75, whose wife Sylvia, 69, has never been found.

All will, in the future, be liable for deportation to Albanian prisons under the deal.

The UK and Albania reached an initial agreement to remove Albanian offenders in July 2021.

The Tirana parliament ratified the pact two months later. But, according to Albanian sources, red tape hampered the deal’s effectiveness.

‘This fresh pact builds on that 2021 agreement,’ added one source, who explained that the jail deportations will be fast-tracked thanks to a new promise by the UK to exchange court data.

The Tirana justice ministry is to receive information on Albanian criminals’ sentencing judgements and details of the offences for which they were found guilty.

‘It has suddenly speeded up the process,’ said the Albanian government source yesterday. 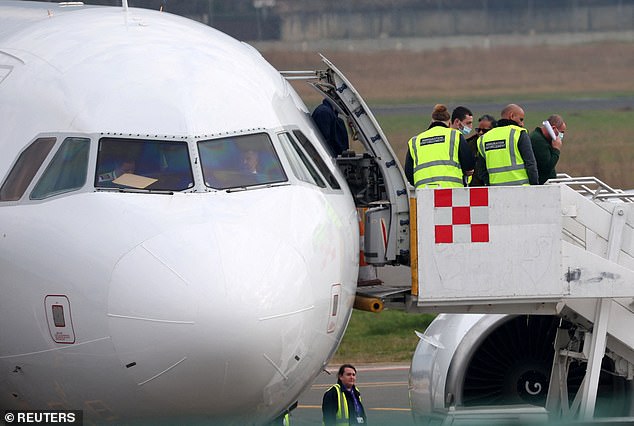 The Home Office December 8 deportation flight was carrying 42 Albanians, 32 of whom were being removed from the UK for committing criminal offences

‘They don’t play by our rules and should be sent back where they came from rather than being allowed to leach off the British taxpayer.’

It comes amid increasing concern over Albanian arrivals by small boat across the Channel – and their links with criminal gangs in the UK.

More than 13,000 have reached Britain from northern France this year and now make up around one in three Channel arrivals overall, despite their country being a safe Nato ally which wants to join the EU.

Earlier this month Prime Minister Rishi Sunak outlined how a newly-signed agreement with Tirana will help combat the crisis.

He said the changes would allow their asylum to be declared ‘clearly unfounded’ and ‘swiftly returned’.

He vowed: ‘Over the coming months, thousands of Albanians will be returned home.’

However, ministers have yet to reveal their plan to stop Albanian removals being frustrated by human rights challenges and claims of ‘modern slavery’.

The Albanian ambassador to Britain admitted earlier this month that migrants from his country are ‘pretending’ to be victims of modern slavery.

Qirjako Qirko told MPs that many Albanians who cross the Channel by small boat are ‘just economic migrants’.

He also repeatedly stated that his country is ‘safe’ – meaning there was no need for his citizens to flee as asylum seekers. 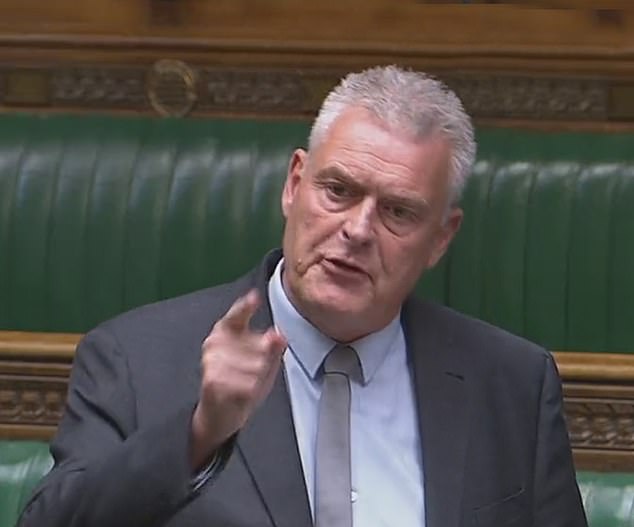 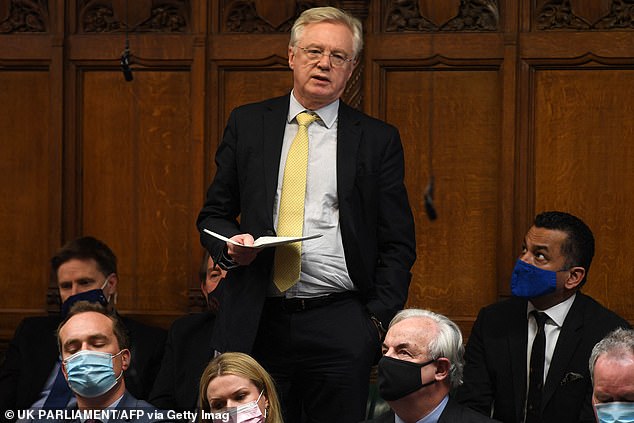 Former Brexit secretary David Davis has urged ministers to follow the lead of more than a dozen European countries which refuse all asylum claims by Albanians. He published figures which showed 14 European nations did not grant a single Albanian asylum claim last year

In November senior officials from ‘Britain’s FBI’ warned Albanian criminals are committing ‘blatant manipulation’ of modern slavery laws and have even been ‘coached’ on what to say if they are arrested.

The National Crime Agency (NCA) said Albanian organised crime groups are bringing workers into Britain by small boat to work in the drugs trade, such as cannabis farms.

The Albanian-linked drugs trade is active across the UK in cities, towns and even rural areas, the agency said.

Some Albanian lawyers, accountants and other professionals based in the UK are thought to be supporting huge criminal enterprises, the officials added.

Former Brexit secretary David Davis has urged ministers to follow the lead of more than a dozen European countries which refuse all asylum claims by Albanians.

The Conservative MP said data showed the UK accepted Albanian asylum applications at one of the highest rates in the world.

By comparison, the UK granted asylum to more than 55 per cent of the 4,754 claims made by Albanians last year.

The UK’s Ministry of Justice was contacted for comment.