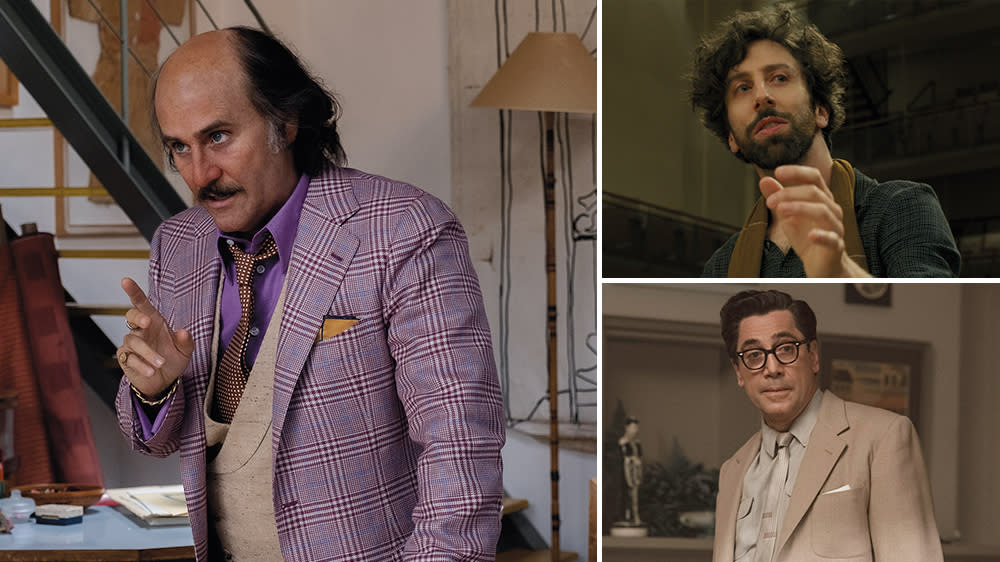 Every year, audiences are treated to a barrage of performances in which the actors have gone all-in on every transformative level, and in many instances, have stretched themselves beyond previous expectations. Over the past 12 months, a strong mix of talent has displayed stunning range; crossing various genres, and providing film lovers with the chance to see their favorite stars going against type. Of course, it takes confident casting directors and strong-willed filmmakers with a unique sense of vision to deliver the perfect choice of performer in each role, which can help to separate their film in a crowded field. And for the actors themselves, it’s clear that some of their finest work can arrive in unexpected projects in which their abilities are in perfect synch with the material.

In Leos Carax’s trippy and exuberant musical “Annette,” actor Simon Helberg — best known for his comedic work on “The Big Bang Theory” — went in the opposite direction, delving into a purely dramatic character. He plays a nameless orchestra conductor, whose central importance to the multilayered narrative is most crucial.

“Playing a character without a name ignited a little insecurity within me, but the film is cryptic by design. He could have been called The Conductor, because that’s what he’s so passionate about — he’s solely fulfilled by his passion to be a conductor,” says Helberg. He saw the character as having “a strong moral compass, almost like that of a narrator from a novel, except here it’s being visualized.”

When Helberg first read the audacious screenplay, he knew that the project would amount to a challenge.

“The piece read more like an opera than a traditional screenplay, and it can be a little freeing, if daunting, to have such an open-ended process. With Leos, he’s very exacting, but in other moments, quite loose, so it’s a great combination of ingredients. You’re unmoored and tethered at the same time,” he says.

Jared Leto has always been an actor who transforms himself with each performance — his work in “Suicide Squad” and “Dallas Buyers Club” demonstrates his massive range. In “House of Gucci,” he is unrecognizable sporting a balding head and jowls as Paolo Gucci, a larger-than-life member in a fashion family filled with outsized relatives.

“It’s always about finding the heart and soul of a character, and it was definitely in the script, but we were always trying to bring that out as much as possible,” says Leto, who underwent hours of make-up and facial prosthetics to effectively portray Paolo. “I always feel an obligation when playing a real person, and I try to bring as much dignity as I possibly can. Making a film is like a painting, it’s highly impressionistic, and the use of make-up changes the process and the possibilities when it comes to creating a life on screen.”

Working with Ridley Scott was a “dream come true” for Leto who also had the chance to work with one of his idols. “Al Pacino has always been a big inspiration for me, from ‘Panic in Needle Park’ to ‘Dog Day Afternoon’ and ‘The Godfather,’ he taught me what’s possible,” he says of the actor who plays his father in “Gucci.”

Andrew Garfield’s emotionally stirring performance in “Tick, Tick…Boom!” super-charges Lin-Manuel Miranda’s spirited directorial debut, with the actor going to new places as performer, and inhabiting the restless role of “Rent” creator Jonathan Larson with an endless amount of energy and passion. It’s even more impressive when you consider Garfield had never sung professionally before.

“There’s a part of me who loves to be outside of my comfort zone, doing things that expand me and where the potential to fail is high,” says Garfield, who had to learn to carry a tune and look comfortable behind a piano. He also had to dial up the energy. “Jonathan was always turned up to 11, always writing for his life. He was a runaway train of talent and ideas, and he was driven to the point of self-obsession,” he says.

And because Garfield was so in-synch with all the elements, his aggressiveness never comes off as overbearing; he infused Larson with a sense of vitality that makes the audience immediately warm up to him.

The fiery narrative focuses on the artistic process in a very intimate manner, so it wasn’t hard for Garfield to understand some of the frustrations that Larson had experienced. “This story takes you on a quintessential artist’s journey, where you see how Jonathan discovered his true calling. I’m always curious about the ultimate potential we can all reach, in anything that we do. So this project contained that good type of fear, where I knew I had to do it, regardless of any of the challenges. That ticking sound we all hear is the shortness of life,” he says.

This year, it’s a one-two-punch for Javier Bardem, between his work in “The Good Boss,” which is Spain’s official Oscar selection for international feature at the 94th Academy Awards, and his performance in “Being the Ricardos,” playing iconic performer Desi Arnaz. Aaron Sorkin’s splashy recreation of classic Hollywood television takes a snap-shot view of how tough it was for Lucille Ball and Arnaz to navigate everything that came with mega-stardom and calls upon Bardem — who won a supporting actor Oscar for his chilling turn as a killer in “No Country for Old Men” — to show another side, complete with comedy and singing.

Stepping into Arnaz’s shoes was an opportunity that Bardem pursued. “I felt a strong connection to his energy, and with him, there were no boundaries. He was a comedian, a businessman, a husband who was madly in love with his wife, who just happened to be one of the most iconic women in the world. You have to get very close to what that person meant to everyone around them, during that specific time and place,” he says.

And because Bardem is so subtly adept at harnessing so much in every scene, there’s an effortless quality to the way he balances comedy and drama.

“Desi was a brave man in a time when being a foreigner was a huge burden, and he never turned a blind-eye to himself. He carried an incredible sense of dignity and was a force of nature as a person.”

In Fernando León de Aranoa’s sharp social drama “The Good Boss,” Bardem plays the owner of a family-run factory, who meddles in the lives of his employees in an attempt to win an award for business excellence. “It’s about the abuse of power within industry, and it hits you in the gut by the ending,” he says. The film received a historic 20 nominations at the Goya Awards, which is the Spanish equivalent of the Oscars.

The year was filled with other terrific performances, including Benedict Cumberbatch exploring his dark side in Jane Campion’s revisionist western, “The Power of the Dog,” and rising star Jonathan Majors as a hot-blooded gunslinger in the stylish oater, “The Harder They Fall.”

DJ-turned-comic Simon Rex explored his previously untapped dramatic side in Sean Baker’s down and dirty family drama, “Red Rocket.” Will Smith’s lived-in performance as Richard Williams in “King Richard” further demonstrates the actor’s innate ability to crawl deep into a character when given the chance by the material, and Leonardo DiCaprio, very much prone to taking on intensely dramatic roles, went in a deceptively lighter direction in Adam McKay’s satirical comedy, “Don’t Look Up.”