Thousands of people take to the streets of Caracas as pro- and anti-government rallies are held in Venezuelan capital.

But on Wednesday, she was among the thousands of protesters who defied the rain as they took to the streets of Caracas to demand Venezuelan President Nicolas Maduro step down amid a deepening political and economic crisis.

“We’re tired of boxes of food, I’m tired begging for everything,” Montero, a resident of Petare, one of the capital’s poorest neighbourhoods, told Al Jazeera.

As she walked towards the protest, holding a Venezuelan flag, some shouted insults at her. Others applauded her.

Last year, her daughter fled the country on foot, crossing the Colombian border to look for a better future abroad. Montero doesn’t know when she will see her daughter again. 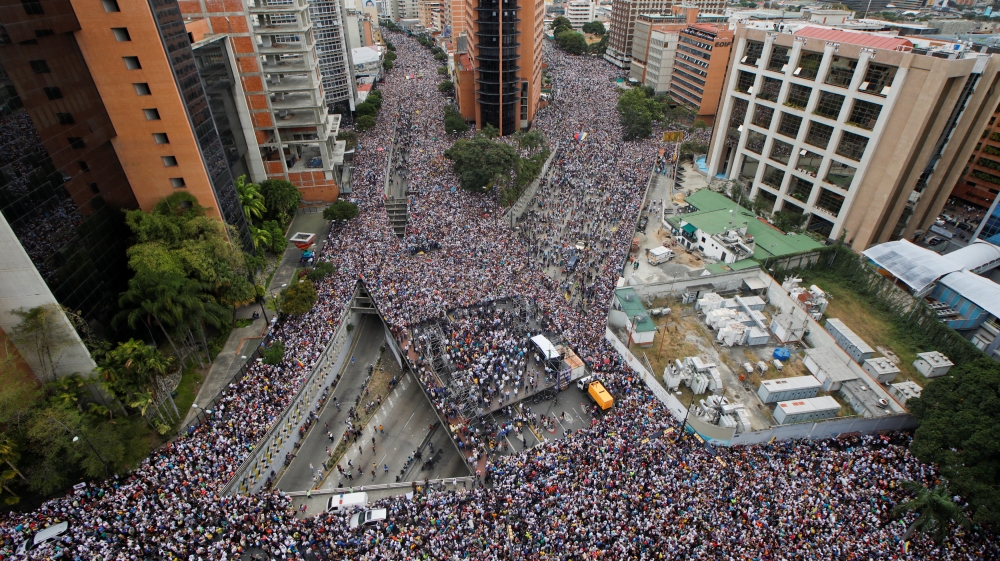 According to the United Nations, approximately three million Venezuelans have left the country since 2014 due to its economic and security woes.

The is roughly one in 10 Venezuelans, making it virtually impossible to find anyone in the country who does not have a relative abroad or does not know someone who has left.

Not long ago, the poorest parts of the population would not join the anti-government protests. The poor were late President Hugo Chavez’s bastion – they supported the revolution, no matter what.

“With hunger and unemployment, I still stay with Chavez,” was their slogan.

Things now appear to have changed. Food shortages, lack of medicines and hyperinflation have undermined the support for the government of Chavez’s successor, Maduro.

“Between dying of hunger, of diseases, we prefer to die fighting,” said Hector Perez, who sells sweets in the street.

Wednesday’s protests come two weeks after Maduro began his controversial second term in office following a May 2018 election that was boycotted by the opposition which argued that the electoral authorities lacked credibility.

The elections were also described as a sham by many within the international community.

On Wednesday, as 35-year-old Juan Guaido, the president of the National Assembly, took an oath swearing himself in as an interim president in front of thousands of supporters, in a move that was backed by countries such as the United States, Brazil and others, Carolina cried.

“This is so exiting. I can’t believe we are going to have a non-revolutionary president after 20 years,” she said. 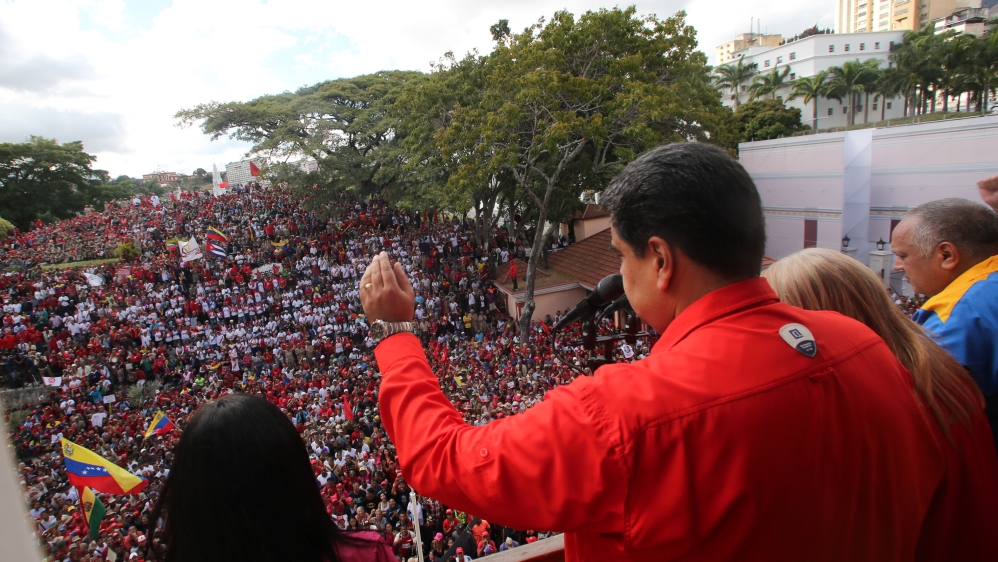 ‘Maduro is my president’

But as this was taking place on Caracas’s east, right across the capital on its western side, Maduro and his supporters were holding a rival rally outside the presidential palace.

“We are here supporting the revolution and demanding respect to [for] the sovereignty of Venezuela,” Josmary Gonzalez, a young woman who was born and raised under the revolutionary government, said.

“Like 61 years ago when the people came out to defend democracy, that is why we are supporting Maduro today”, she added.

January 23 is a symbolic date in Venezuela’s history. In 1958, civilians and the military overthrew the five-year dictatorship of Marcos Perez Jimenez.

“Maduro is my president. I voted for him. I don’t want that Guaido kid,”, said a man with a red shirt, the “uniform” of government supporters.

Meanwhile, Diosdado Cabello, the first vice president of the United Socialist Party of Venezuela, urged their followers to organise vigils in the vicinity of the presidential palace to defend democracy.

“We don’t care what the empire or the European Union say, because ultimately, we are determined to be free,” Cabello said.

Celebrities
Remember getting dressed up and slipping your feet into something other than slides and slippers? Right now, it sort of...
Lifestyle
While a majority of states and cities are still vaccinating higher priority groups of people, one county in Arizona is...
TV & Movies
MANPREET is shocked when Rishi suggests renewing their vows next week in Emmerdale.  Rishi called things off with Manpreet when...
World News
A few weeks ago, a former student of mine shared a GIF that made me laugh out loud because it...
Beauty
Looking for the secret sauce that will make your workouts shorter and more effective? Search no further than compound exercises.Compound...
Fashion
MEGHAN Markle showed “anger” after claiming the palace previously blocked her from doing an interview with Oprah Winfrey.  In the...
Recent Posts