The Duke of Sussex has described the Roe v Wade abortion ruling in America as a “global assault on democracy and freedom”.

The Duke appeared to criticise the ruling of the US Supreme Court during a speech at the UN headquarters to mark International Nelson Mandela Day. It follows comments from the Duchess of Sussex after the reversal of Roe v Wade last month, when she spoke of the couple’s “guttural” reaction and claimed that the “feminist” Duke had been equally despairing. 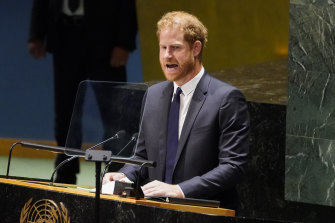 While the Duke would not have made such remarks when he was a working member of the Royal family, he and his wife have become increasingly vocal on certain topics since their move to the US.

The Duke also spoke of the inspiration he had taken from Mandela and of the former South African president’s relationship with his late mother. He said he had a photograph of Mandela with Diana, Princess of Wales, taken five months before her death in 1997 “on his wall and in his heart every day”, and that “global uncertainty and division” had inspired him to “go back to Mandela’s writings” for insight into how to find light in the darkness.

The Duke told UN ambassadors it had been “a painful year in a painful decade”, expressing empathy with those who felt “battered” and “helpless” in the face of what he described as a seemingly endless stream of disasters and devastation.

“Climate change wreaking havoc on our planet, with the most vulnerable suffering most of all,” he said. “The few, weaponising lies and disinformation at the expense of the many. 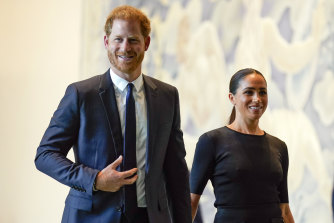 “And from the horrific war in Ukraine to the rolling back of constitutional rights here in the United States, we are witnessing a global assault on democracy and freedom – the cause of Mandela’s life.”

The Duchess accompanied the Duke in New York for their first public appearance since they returned from the UK after the Platinum Jubilee.

As they arrived hand in hand, an American journalist heckled them about a new biography by Tom Bower, Revenge: Meghan, Harry And The War Between The Windsors. The reporter called out: “Prince Harry, are you worried that Tom Bower’s book is going to widen your rift with the Royal family?” Neither royal responded.

The Duchess, dressed in black and carrying a Mulberry handbag, chatted and laughed with the Duke before the event began, and later accompanied him to meetings with UN ambassadors.

“And from the horrific war in Ukraine to the rolling back of constitutional rights here in the United States, we are witnessing a global assault on democracy and freedom”

The Duke revealed in his speech that the photograph of his mother with Mandela was given to him by the late Archbishop Desmond Tutu, whom he met during a royal tour of southern Africa in 2019.

“When I first looked at the photo, straight away what jumped out was the joy on my mother’s face; the playfulness, cheekiness, even… pure delight to be in communion with another soul so committed to serving humanity,” he said. “Then I looked at Mandela. Here was a man with the weight of the world on his shoulders, asked to heal his country from the wreckage of its past and transform it for the future.

“A man who had endured the very worst of humanity – vicious racism and state-sponsored brutality. A man who had lost 27 years with his children and family that he would never get back.”

The Duke added that he had “always found hope” in Africa, a continent where he “found peace and healing”. “It’s where I’ve felt closest to my mother and sought solace after she died, and where I knew I had found a soulmate in my wife.”