TIJUANA, Mexico (Reuters) – The children crammed into the bus and sat in two neat lines, poring over notebooks at desks where once there had been passenger seats. From the overhead baggage bins, a teacher hung their exploits: colored alphabet letters, watercolor paintings. 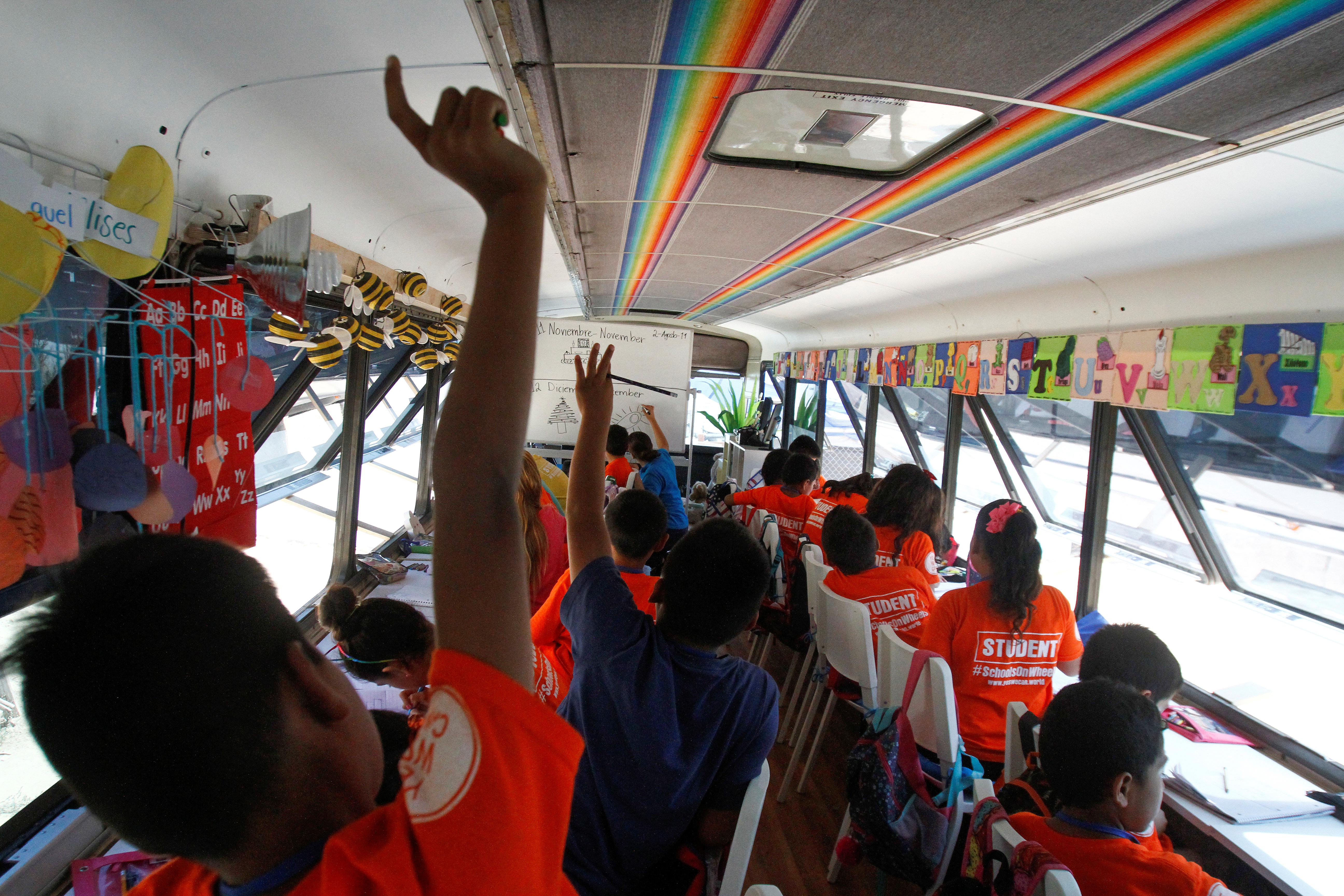 In the border city of Tijuana just miles from the U.S. border, in a dirt parking lot adjoining a migrant shelter, that bus is offering a rare chance at school to Central American and Mexican children.

For most of the several dozen who have passed through the program since it began in mid-July, education was a distant dream in the weeks or months since their parents decided to uproot and head north to seek refuge or a better life.

Estefania Rebellon, director of the program called Yes We Can, said it offers specialized bilingual education for children who tend to have low literacy and struggle with social skills. Providing care and security are important too.

“These are children from very dangerous areas, where they have very big issues with trust,” she said. Despite a shooting at a Walmart in El Paso, Texas, over the weekend that left 22 people dead, including eight Mexicans, she said the violence they saw in their home countries was likely worse. Police say the gunman posted a racist, anti-immigrant manifesto before the shooting. [nL2N25108L]

She said it was upsetting that vulnerable people could not count on finding safety in the United States, even to run basic errands such as back-to-school shopping.

“It’s atrocious that there’s the amount of hate in this country that’s been converted into mass shootings. It’s taken innocent lives,” she said.

Rebellon, who also works as an actress in Los Angeles, said she knows what it is like to feel lost as a migrant child. When she was 10 years old, she moved to Miami from Colombia, where her parents had received death threats.

When she saw large groups of Central American migrants arriving in Tijuana late last year, she launched a school program for children in tents at a large shelter.

The “tiny home movement” – a eponymous social movement that advocates for smaller homes – inspired her to try the same concept in an old bus.

Rebellon’s bus used to have a capacity for 55 people – but with the old interior torn out, it can now seat 80 children.

The bus has welcomed aboard 37 students ages 5 to 12 since opening, and will take in another 20 children in the coming weeks. Yes We Can will also launch a program for teenagers in tents outside, Rebellon said.

The three teachers, accredited in Mexico, have experience working with displaced children in Latin America.

Yes We Can is working to bring on a fourth teacher who speaks two indigenous language, in addition to Spanish and English.

Most of the children are from families that are stuck in limbo in Tijuana for weeks or months as they inch higher on a long wait list to apply for asylum in the United States.

They come from Honduras, El Salvador and Guatemala as well as the Mexican cities of Guerrero, Michoacan and Leon, where locals often fear getting caught in the crossfire of warring drug gangs.

Rebellon said parents from those cities have told her that teachers often refuse to show up at school for fear of getting killed or kidnapped, and some children had missed school for several months.

If the program can secure enough funding, Rebellon said she would like to expand to Ciudad Juarez and Mexicali, other border cities with surging migrant populations.