Rio de Janeiro: Brazil’s federal police have seized three pre-Columbian archaeological pieces that had been auctioned at a Rio de Janeiro art galley, they said, and planned to return them to Ecuador and Colombia.

The ceramic pieces, believed to have been looted from archaeological sites or museum collections in those countries, were sold last year and have only now been recovered after an investigation into the buyers and sellers, a police statement said.

Preliminary identification of the pieces as Pre-Columbian – that is, preceding Christopher Columbus’s voyage to the Americas in 1492 – was done by Brazil’s historic and artistic heritage institute IPHAN, although how they arrived in the country is still unknown. 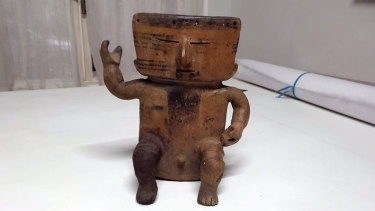 Police in Rio de Janeiro, Brazil, seized a number of pre-Columbian items, some from the Jama Coaque culture known for its elaborate ceramic figurines and vessels depicting human beings and animals.Credit:Brazilian Federal Police

Two of the pieces are from the Jama Coaque culture that flourished for about 2000 years until the Spanish conquest in what is today the coastal province of Manabi in north-eastern Ecuador, a statement from the Ecuadorean embassy said.

The Jama Coaque culture was known for its elaborate ceramic figurines and vessels depicting human beings and animals.

The international trade in looted archaeological pieces is vast and growing, according to experts.

Global enforcement has stepped up, too, partly in response to the industrial-scale looting of sites in Iraq after the fall of Saddam Hussein’s government in 2003.