Medical organisations say Australia is lagging behind other countries when it comes to tackling the health impacts of climate change and warn inaction is putting lives at risk.

According to the MJA-Lancet Countdown report, an annual assessment of the country's progress on health outcomes related to climate change, Australians' exposure to the health effects of events such as bushfires and heatwaves is increasing. 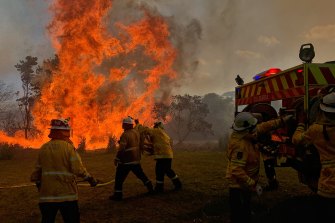 In January, the Bureau of Meteorology determined 2019 – punctuated by the Black Summer bushfire season – was Australia’s hottest and driest year on record.

While air pollution levels in Australia are typically low compared to other developed nations, the report found dangerous PM 2.5 concentrations during the bushfires led to annual levels in NSW and the ACT that "far exceeded" levels recorded over the past 20 years.

Levels in the ACT and NSW during December 2019 were the highest recorded of any month in that 20-year period.

Australian temperatures during heatwave season (between November and March) have been at an unhealthy level for the past 20 years, the report concluded. Moreover, the nation's "excess heat factor", an index which tracks particularly dangerous three-day periods of high temperatures, has increased by 37 per cent over this time.

"Climate change is not like a traditional health risk, such as smoking and obesity," she said.

"These are factors that impact our fundamental determinants of our health, including fresh air, clean water, sufficient food and housing."

Despite identifying increased public awareness of the connection between climate change and health outcomes – there was a doubling of newspaper articles on the topic between 2018 and 2019 – the report's authors concluded Australia is behind many comparable countries in its health-related climate policy.

While policies exist at a state and territory level, no such plan exists at a national level "despite clear and present need", the authors said.

The report focused heavily on the Black Summer bushfires, which took 33 lives across Australia. The report found there were also 417 excess deaths caused by the fires, as well as 1305 asthma emergency department presentations, and 3151 hospital admissions for cardiovascular and respiratory conditions.

Many patients presented with breathing difficulties and chest pain when her clinic reopened in the first week of January, she recalled, although mental health was, and continues to be, the biggest health challenge.

She remains concerned about the ongoing health impacts of smoke inhalation and emotional trauma on her community.

"Another aspect of poor mental health is knowing that we are in this crisis because of climate change that's driven by burning fossil fuels and deforestation; knowing that we've had decades of inaction and nothing seems to be changing," she said.

The group has recommended Australia develops a national climate change and health strategy, supports communities vulnerable to climate disasters and accelerates its transition to renewable energy.

"The COVID-19 pandemic has demonstrated the significant potential of genuinely collaborative state and federal approaches to public health crises; there are many lessons to be learned from COVID-19 in responding to climate change," they said in a statement.