BBC meteorologist Carol Kirkwood warned that the UK could experience the coolest bank holiday on record, lower than 18.4, the previous record. Last year the country had the highest temperature for this late August bank holiday on record, reaching just over 33 degrees. The weather presenter said that “we may or may not beat the coldest record, but it certainly will be one of the coolest that we have seen of late,” while predicting a possible 20 degree swing to a low of 13 degrees in parts of the UK today.

Ms Kirkwood told viewers: “So it’s a cool dry start and will be wetter, windier and warmer by mid-week.

“Then it will be cooler again by the weekend so the temperature will be up and down this week.

“High pressure if firmly in charge – there’s a weather front which has slowed down in the Atlantic but it still will eventually come our way.

“There’s a lot of dry weather to start with and a few coastal showers, particularly off the coast of the south east.” 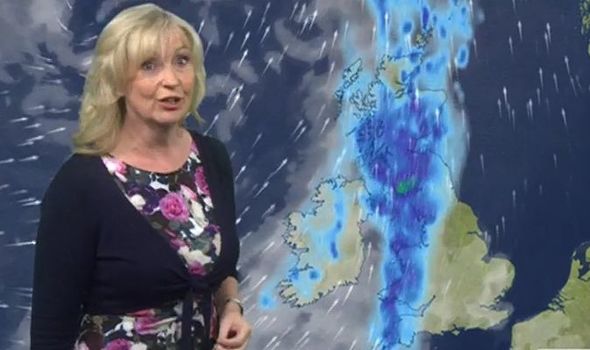 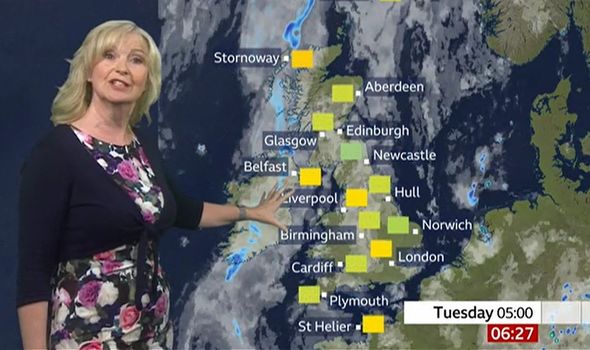 She continued: “Some clear skies will appear particularly across eastern parts of England.

“But we do have areas of cloud in Northern Ireland, Scotland, parts of Wales, north west England and Wales as well.

“Through the day the cloud will build and will flatten out so it will be a cloudier afternoon. 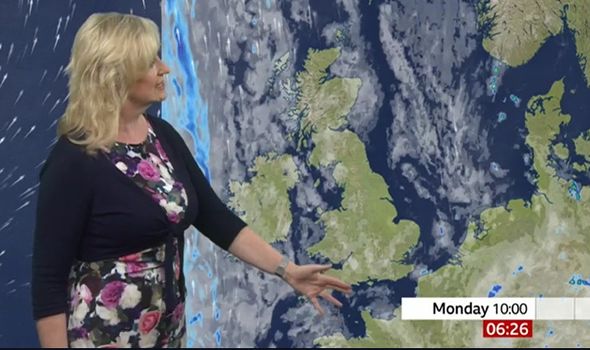 The presenter added: “Our weather front will start to come in from the west, probably not producing any rain.

“This evening there’ll be still a fair bit of cloud around, still some clear skies as well.

“Our weather front will eventually get into western Scotland and Northern Ireland.” 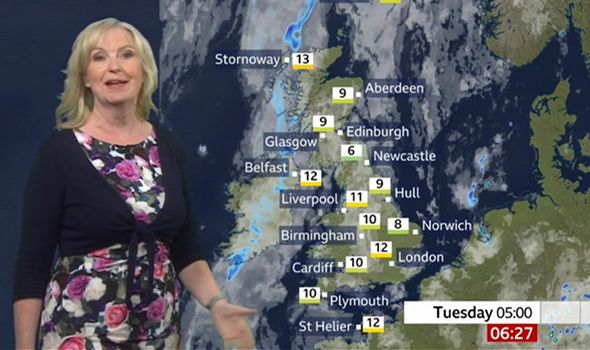 Ms Kirkwood said: “As we head through the course of tomorrow, high pressure is still in charge for much of the UK.

“But this weather front will be very slowly pushing from the west towards the east.

“It will bring more cloud with it as it does so and once again more spots of rain.

“As we move further south under the area of high pressure we are looking at drier conditions.

“The temperatures are fairly disappointing for the time of year at 14 in the north and 19 as we push down towards the south.”