The latest BBC weather forecast showed a bitter snow blizzard sweeping across the UK later today. BBC meteorologist Sarah Keith-Lucas warned that the strong winds and freezing air will make it feel as low as -10C during the day in parts of the country. However, she went on to forecast the arrival of milder air on Sunday before temperatures return to double figures by Monday.

Ms Keith-Lucas said: “We are slowly going to be saying goodbye to the ice and the snow over the next couple of days.

“So gradually, through the weekend, it will be turning milder, particularly on Sunday.

“What you will notice both today and on Sunday is the strength of the wind.

“We have a front moving in from the west this morning, bumping into that cold air and bringing quite heavy, persistent snow this morning for Northern Ireland.” 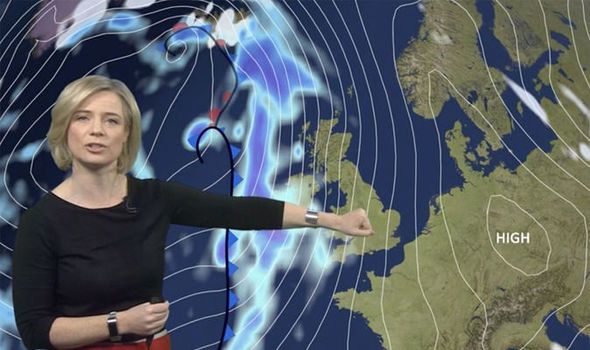 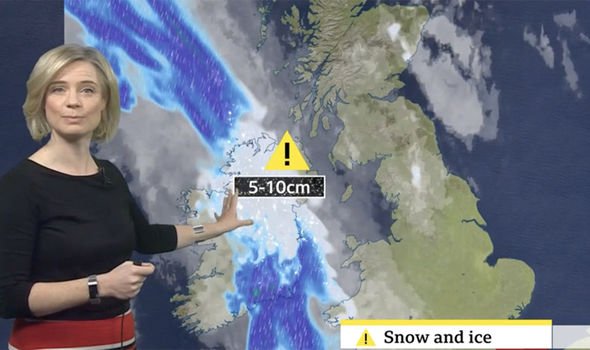 She continued: “There could be about five to ten centimetres falling there.

“As we head through the day, that weather front edges its way eastward so there will be patchy snowfall across parts of western Scotland, north-west England and Wales.

“Combine that with these gusts of winds, which could reach past 40mph, there could be blizzard conditions for some of us where we see the heavier bursts of snow

“With the very low temperatures, only a degree or two above freezing, combined with the wrong southernly winds, it will feel really cold out there – as low as -10C in a few spots.” 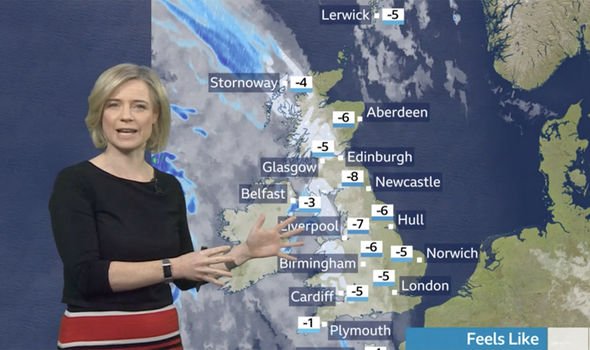 However, Ms Keith-Lucas added that milder air will “sweep its way across the country on Sunday”.

She said: “It will take a while to get to eastern parts, which it will stay near freezing.

“As we see rain fall onto these subzero conditions, there could be icy stretches lasting throughout the day.

“But, by Monday, look at those temperatures, we are back into double figures. As we move into the coming week, things are turning milder.” 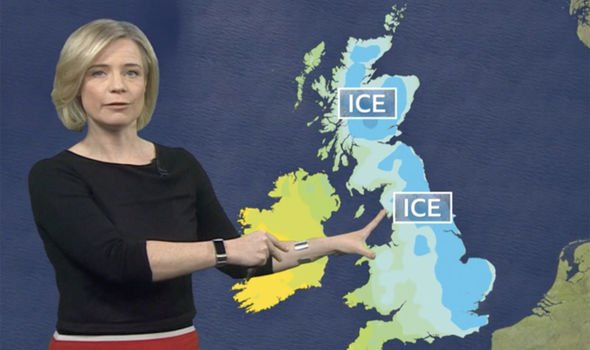 It comes amid Met Office warnings of more freezing temperatures, snow and ice this weekend.

Warnings have been issued for Scotland and Northern Ireland for Saturday, but the Met Office said that more may be needed for Sunday due to a risk of freezing rain and ice.

Neil Armstrong, chief meteorologist at the Met Office, said that there was a risk of freezing rain on Sunday over the high ground in Scotland and northern England.

On Wednesday night, the coldest UK temperature of -23C (-9.4F) for more than 25 years was recorded at Braemar in the Scottish Highlands.