A “cluster” of storms will move from west to east throughout the day on Thursday and the wet weather could produce some flash flooding and large hail for many. Temperatures across the continent will remain high, for some even over the 30C mark, but the rain will be relentless nonetheless. BBC Weather forecast Nick Miller warned: “There is some more very wet weather on the way to western parts of Europe during Thursday and more especially to the United Kingdom.

“You can see the swirl of could around an area of low pressure producing a band of rain not moving very much or very fast.

“It stretches across the UK onto Norway and Sweden.

“Underneath that a potential for some flooding.

“Across southern areas lots of sunshine to be had here, still a lot of heat through central and eastern parts and the risk of severe thunderstorms in that as well.

“Some storms to run into parts of Turkey, much of the south-east of Europe though is fine now. 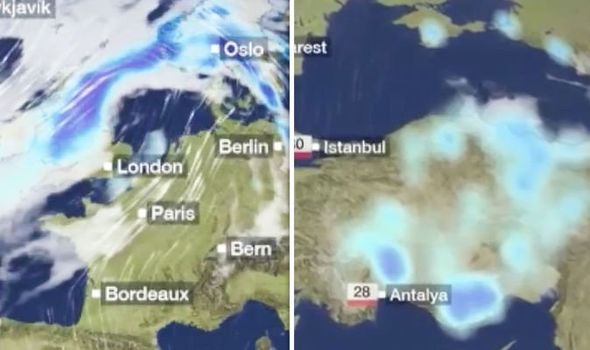 “Across Italy, into Iberia and more in France we will see some sunshine on Thursday compared to recent days.

“But this cluster of storms moving out of Germany towards Poland could produce some flash flooding and big hail in places too.

“Still, in Poland temperatures into the 30Cs.”

A strong band of rain is also sweeping over the UK this week, causing widespread heavy showers.

The Met Office has issued a chain of yellow weather warnings extending from the Midlands to Scotland and forecasters warned rising flood waters could affect travel.

They also issued a further 43 flood “alerts” which advise people to prepare for possible floods.

There are flood warnings for the following places in England:

Flood advice and maps are available on the Environment Agency website.