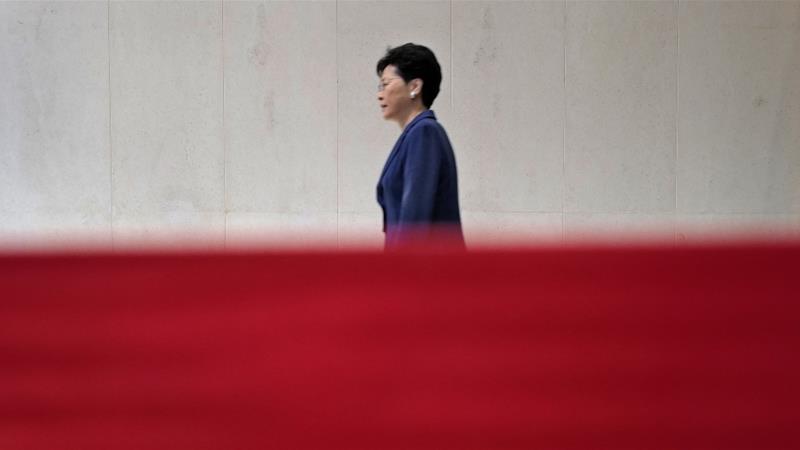 Beijing has backed Hong Kong’s government over its controversial plan to allow extraditions to the Chinese mainland, saying it opposes “any outside interference” in the semi-autonomous territory.

Chinese foreign ministry spokesman Geng Shuang said on Monday that Beijing would “continue to firmly support” Hong Kong leader Carrie Lam, who earlier vowed to push ahead with the new laws despite massive protests against them.

“Second, we firmly oppose any outside interference in the legislative affairs [of Hong Kong],” Shuang told a regular press briefing, adding “some countries have made some irresponsible remarks about the amendment”.

Chinese state-run media on Monday slammed the territory’s protest organisers for “collusion with the West” and pointed to meetings between Hong Kong opposition figures and senior US officials, including Secretary of State Mike Pompeo and House Speaker Nancy Pelosi.

“It is very noteworthy that some international forces have significantly strengthened their interaction with the Hong Kong opposition in recent months,” an editorial in the Chinese-language edition of the Global Times said.

Lam earlier on Monday defended the proposed amendments – which would allow for case-by-case extraditions to jurisdictions, including mainland China, beyond the 20 states with which Hong Kong already has treaties – as necessary to ensure the territory meets its “international obligations in terms of cross-boundary and transnational crimes”.

Critics fear the changes could make Hong Kong residents vulnerable to politically motivated charges in China’s notoriously opaque court system, however, and are part of a wider move by Beijing to scale back the city’s freedoms enshrined under the so-called “one country, two systems” principle.

But Lam, who was elected chief executive in 2017 by a committee of mostly pro-Beijing Hong Kong elites, denied taking orders from the Chinese government.

“I have not received any instruction or mandate from Beijing to do this bill,” she told reporters. “We were doing it – and we are still doing it – out of our clear conscience and our commitment to Hong Kong.”

On Sunday, more than one million people took to the financial hub’s streets to demonstrate against the bill and call for it to be scrapped, according to protest organisers. Police put the figure at 240,000 at the march’s peak.

Al Jazeera’s Sarah Clarke, reporting from Hong Kong, said the rally marked the city’s largest protest since 1997, when it was handed over to China by the British amid guarantees that its autonomy and freedoms, including an independent justice system, would be protected.

The law’s opponents have called for another demonstration on Wednesday when a second reading of the bill is scheduled to take place in Hong Kong’s pro-Beijing majority 70-seat Legislative Council.

Emily Lau, a political activist and former Democratic Party Legislative Council member, said critics of the proposal were “all united by their fear of the Chinese Communist Party”.

“There are many who are terrified of the Chinese legal system coming into Hong Kong,” Lau told Al Jazeera.

“It will be like a truck driving through and making a big hole in one country, two systems. We will be crushed, we will have one country, one system, and Hong Kong’s freedom and the rule of law will disappear,” she added.

“We are a lovely, vibrant, free city and nobody wants to see us crushed by evil forces, so I hope the international community will continue to keep an eye on Hong Kong.”

US and European officials have issued formal warnings over the proposed changes, matching international business and human rights groups who fear the amendments will dent Hong Kong’s rule of law.