The event, the first time the campaign has travelled since the convention, comes amid concerns over Biden’s absence. 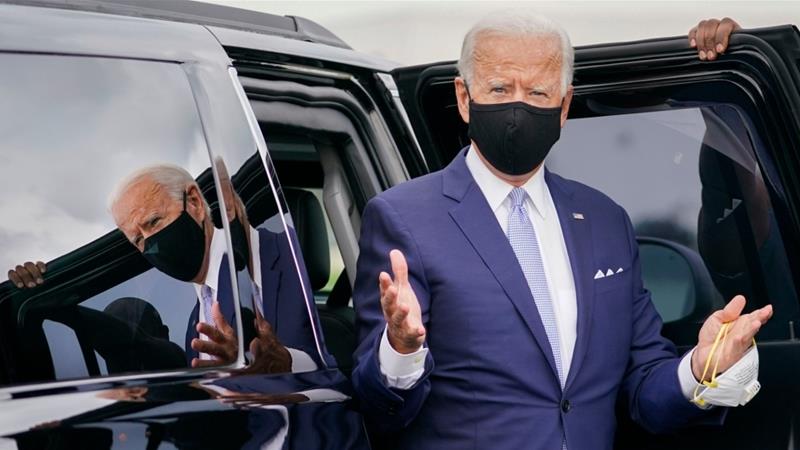 Democratic presidential candidate Joe Biden has returned to the campaign trail, travelling for the first time since the party’s convention and portraying Trump’s “law and order” message as empty rhetoric that further incites violence.

Biden’s appearance in Pittsburgh on Monday sought to quiet criticism that the former vice president, who has cautiously approached the coronavirus pandemic, had ceded ground to US President Donald Trump – particularly when it comes to the country’s social unrest – during his physical absence from the campaign trail.

The president has increasingly relied on a message that violent agitators are threatening US cities and suburbs while being given a pass by the “radical left”. On Tuesday, Trump plans to visit Kenosha, Wisconsin, where Jacob Blake, a Black man, was shot in the back by police officers on August 23, sparking days unrest in the city which two people have been killed.

“You know me, know my heart. You know my story … Ask yourself. Do I look like a radical socialist with a soft spot for rioters, really?” Biden said during his speech. “I want a safe America. Safe from COVID. Safe from crime and looting, safe from racially motivated violence, safe from bad cops.”

“Fires are burning we have a president who fanned the flames, rather than fighting the flames,” he added. “He can’t stop the violence, because for years he’s fomented it.”

‘We do need him here’

Biden’s appearance on Monday comes during a time in the race when he can ill afford to not have his presence felt, political analyst Eric Ham told Al Jazeera.

“Trump has found a little bit of a groove because now the focus is no longer on COVID-19,” said Ham, “it’s on these protests and demonstrations and the civil unrest.”

“Biden doesn’t have to get into Trump’s mud pen, but he’s got to be able to speak to where the country is. There’s a lot of concern that people are feeling over civil unrest, over COVID-19, over the economy,” he said.

That need is particularly apparent in predominantly white northern battlegrounds states that were key to Trump’s 2016 victory and where the president has maintained a presence in recent weeks.

While polls show Biden remains ahead in Michigan, Pennsylvania and Wisconsin, there have been signs of weakening support in Minnesota, the state where George Floyd was killed by police in May, Ham said.

“Trump has had such a difficult time being able to paint Biden with a broad brush. Now, he’s able to get traction, because some of those white suburbanites are going to listen to this law and order message and they’re going to think, ‘Hey, this guy may, in fact, be strong on crime’,” said Ham, who noted that Democratic vice-presidential candidate Kamala Harris, who is Black and former California attorney general, has been largely underutilised in responding to charges that Democrats are soft on crime.

Trump, for his part, has repeatedly seized on Biden’s distanced approach, portraying him as “hiding” in his basement and taking credit for pressuring Biden to appear publicly.

The physical absence has also been felt within the Democratic party, with US Representative Andy Levin, a Democrat from Michigan, telling the Washington Post on Sunday: “We really just need to hammer on the economics and the complete failure to manage COVID.”

“But we do need him here. We need him to tell that story. And I’m confident that it will happen.”

Meanwhile, Trump on Monday doubled-down on his plans to visit Kenosha, despite warnings from local officials that his presence could further agitate the situation.

On Tuesday, Trump, who also said last week he would send more federal forces to the city, is set to meet law enforcement and “look at some of the damage from the riots,” according to the White House.

In a tweet on Monday, the president took credit for preventing the violence in the city from being worse.

Kenosha authorities had asked for assistance from National Guard troops August 24, with requests for additional troops as needed, in support of the locally-led response to protests.

The Biden campaign has yet to release plans to the visit the city, although Biden spoke with the Blake family last week.