London: Pfizer initially turned down the offer of developing a coronavirus vaccine because the company’s top executives thought the virus would be rapidly contained, like Sars and Mers.

Dr Ugur Sahin and his wife Dr Özlem Türeci, the founders of BioNTech, were told, “Guys, this is not going to work”, by the pharmaceutical giant as the virus was starting to sweep the globe in January 2020. 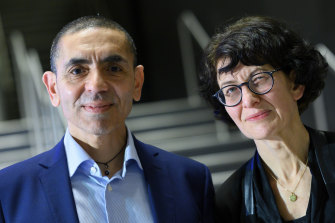 The mRNA technology, which has proved so crucial to the vaccine breakthroughs, was, at the time, also considered too experimental by Pfizer’s vice president and chief scientific officer for viral vaccines, Dr Phil Dormitzer.

“My working assumption was that it [COVID-19] would be controlled”, Dormitzer admitted.

The rejection, revealed in a new book, came just days after the Turkish-born couple decided to dedicate BioNTech to creating an mRNA-based COVID jab, effectively gambling their business on something that had never been done before. Their company is now capitalised at $US85 billion ($115 billion). Yet Sahin and Türeci remain close to Pfizer – and to Dormitzer, or “Phil” as they know him.

Sahin had a detailed image in his mind of how the pandemic would unfold but also thought the Pfizer man’s assessment was “completely rational”.

“After the phone call with Phil, I just thought for a second and said, ‘we will call him again in a few weeks,’” Sahin said.

The couple thought it only a “matter of time” before the drugs giant changed its mind – and they were right: a deal was announced between the two companies only a month later.

New US studies show the COVID-19 vaccines remain highly effective against hospitalisations, despite the arrival of the extra-contagious Delta variant.

“Vaccination works,” Dr Rochelle Walensky, CDC’s director, told a White House briefing Friday. “The bottom line is this: We have the scientific tools we need to turn the corner on this pandemic.”

But as earlier data has shown, protection against coronavirus infection is slipping some: It was 91 per cent in the northern spring but 78 per cent in June and July, the study found.

So-called “breakthrough” cases in the fully vaccinated accounted for 14 per cent of hospitalisations and 16 per cent of deaths in June and July, about twice the percentage as earlier in the year.

An increase in those percentages isn’t surprising: No one ever said the vaccines were perfect and health experts have warned that as more Americans get vaccinated, they naturally will account for a greater fraction of the cases.

Walensky said Friday that well over 90 per cent of people in US hospitals with COVID-19 are unvaccinated.

It isn’t clear if the changes seen over time are because immunity is waning in people first vaccinated many months ago, that the vaccine isn’t quite as strong against Delta – or that much of the country abandoned masks and other precautions just as delta started spreading.

Next week, advisers to the Food and Drug Administration will publicly debate Pfizer’s application to offer a third shot. In Britain, the government is expected to announce a “booster” campaign for higher risk groups, with the Pfizer jab expected to be at the forefront of the programme.