Jackpot! Bizarre moment Bitcoin cash machine starts firing out £20 notes at busy Tube station as customer makes a withdrawal – and security guard has to shield the cash from passing commuters

This is the shocking moment wads of £20 notes flew out of a Bitcoin ATM in front of stunned commuters at a tube station in London.

The footage, filmed at Bond Street station near Oxford Street, shows security guards surrounding the cash machine to stop people getting access to the money.

A sheepish customer, believed to be making a large withdrawal, stood near the ATM, with a duffel bag placed on the floor filling up with money.

The customer seemed to be collecting the money in the bag and even used his feet to push the cash closer together.

He is ignored by the security guards as he watches the money pile up.

Several commuters stop to stare at the cash as it pours out of the Bitcoin ATM.

The Polish company that owns the machine said that it started spewing out notes because a customer was withdrawing a large amount of money. 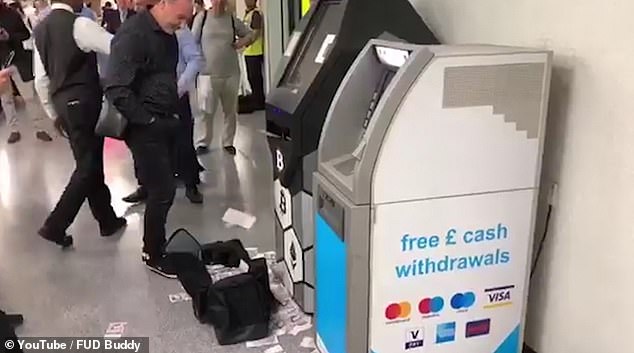 A man, believed to be withdrawing the cash, looks sheepish as he watches £20 notes pour out of the ATM and into his duffel bag 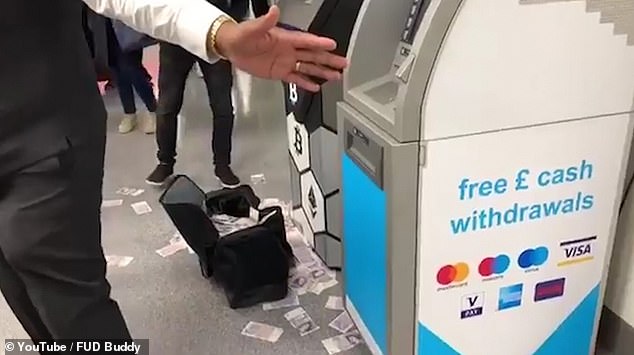 It also insisted that the machine did not randomly start discharging the £20 notes.

He told the Sun: ‘As you can see there is a bag in the front of ATM. However our ATMs support large transactions and it is fair to say that a larger, redesigned presenter would be a good solution.

‘Our customer was not particularly careful, although the ATM should be redesigned to cope better with small denominations used in the UK.’