A 13-year-old boy has died after an industrial bin in which police say he was sleeping with two others was emptied into a garbage truck.

South Australia Police said the three boys – aged 11, 12 and 13 – were “allegedly asleep” in the bin in Port Lincoln when it was being emptied just after 5.20am on Tuesday. 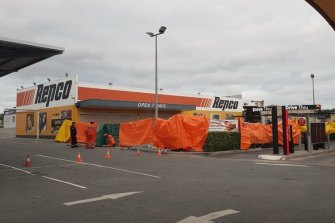 The 13-year-old boy was seriously injured and died in an incident involving a garbage truck in this car park in Port Lincoln. Credit:Nine News

“One boy managed to jump out but sadly the 13-year-old sustained serious injuries and died at the scene,” police said in a statement.

“It is believed the truck driver was unaware the boys were in the bin at the time and is extremely shaken by the incident.”

The third boy was not injured. Police said all three boys were from the Port Lincoln area.

An area of the car park between the Repco store and the McDonald’s drive-through, along Liverpool Street, has been cordoned off.

In a statement, SafeWork SA said it had been notified of the incident.

“One of the boys, aged 13 years, sustained fatal injuries,” it said.

“SafeWork SA offers condolences to his family, friends and colleagues at this distressing and sad time. SafeWork SA inspectors have attended the site and we are currently making inquiries into the incident.”

A report will be prepared for the coroner.

Port Lincoln is on South Australia’s Eyre Peninsula, west of Adelaide, and is about a seven-hour drive from the capital city.