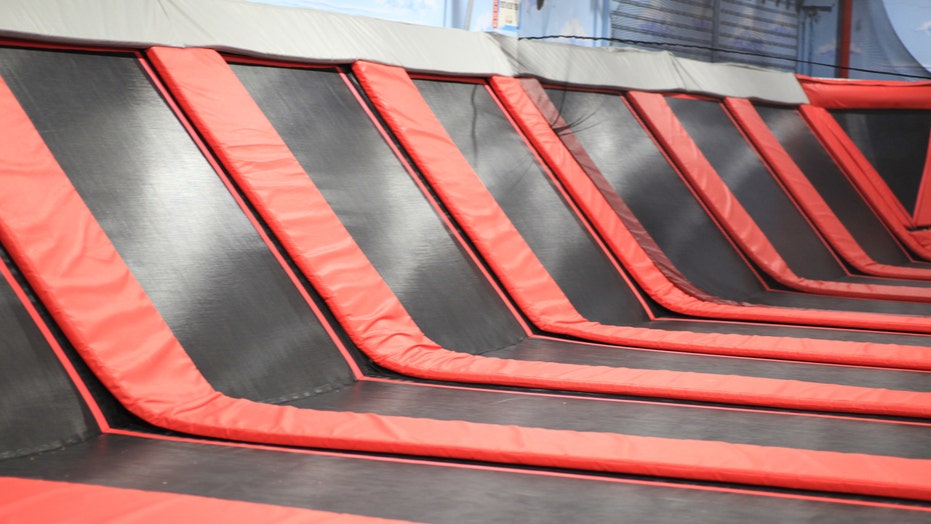 A video of a chaotic brawl among teenagers inside an Illinois trampoline park on Saturday has gone viral.

The more than eight-minute-long clip, which was posted to YouTube on Sunday, had more than 62,319 views at the time of reporting.

In it, the group of dozens of unruly Peoria Elevate Trampoline Park-goers — mostly seen without facemasks — take swings at each other, pull hair, shove, kick, throw trash cans and signs, and push around staff members in the facility’s lobby.

While employees were able to successfully push some of the juveniles outside of the building, smaller fights continue to break out in other parts of the entryway.

Even after the Peoria Police responded to the scene, the video showed smaller fights in the parking lot outside North Allen Road.

While what sparked the clash remains unclear, an anonymous source who was there at the time of the fight told HOI ABC it was initially a fight between two boys from separate friend groups.

No arrests have been made.

Peoria Police told Fox News on Tuesday that while juvenile detectives are working to identify the individuals involved, there were no updates to provide.

In a statement, the department wrote on Sunday that they had arrived at the trampoline park at approximately 9:42 p.m. CT and that the incident was under investigation.

“Upon arrival, officers observed multiple individuals exiting the building and a large group actively fighting (punching and pulling hair) inside. A responding officer noted the smell of what he believed to be pepper spray in the air inside of the business. The group was dispersed and directed outside,” they said.

“Once outside, additional fights broke out again. Officers outside continued dispersing the large group until they were eventually picked up by [adults]. At no time did PPD deploy pepper balls or pepper spray of any kind,” the department continued.

“[Advanced Medical Transport] and [Peoria Fire Department] medics were on scene and standing by for any individual seeking medical treatment. One parent reported her child being attacked but refused medical treatment at the scene,” they concluded.

In response to the fight, WCIA reported that Elevate Trampoline Park owner Liz Wilson announced on Monday that all “teen nights” at their four Illinois locations would be permanently discontinued.

“Elevate Trampoline Park has made the difficult decision to discontinue teen night on Saturday nights at all of our Illinois locations effective immediately. We will replace teen night with open jump time,” she wrote in a statement. “Due to an active police investigation, we are unable to comment on the fight that took place at our Peoria park on Saturday evening. Our staff is working in full cooperation with the police department and are asking anyone with information regarding the cause of the fight or those involved to call the Peoria Police Department.”

“We built our trampoline parks on the foundation of creating a fun, positive and safe place for everyone of all ages to enjoy,” Wilson continued.

“We are committed more than ever on focusing our efforts to maintain a [family-friendly] environment, where everyone who enters our doors, both guests and staff members, are respected and treated with kindness at all times,” she added.

The Journal Star reported on Monday that the facility is allowed to be open under the state’s Phase 4 COVID-19 reopening guidelines, operating at 50% capacity or up to 50 people.