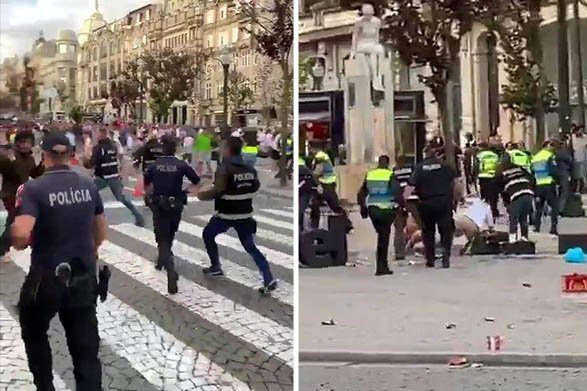 A spokesman for the PSP force said a third fan had been identified after violence broke out in Liberdade Square in the centre of the city.

The trouble reportedly started after a Portugal supporter threw a drink in the air to celebrate Cristiano Ronaldo putting Portugal 1-0 up in their Nationals League semi-final against Switzerland.

It is said to have sparked retaliation from several England fans who hurled bottles at the locals.

Police confirmed they had acted after disturbances between England and Portugal fans.

A PSP spokesman said in the aftermath of a baton charge against around 200 England supporters: “There was an altercation between England supporters and some Portuguese, assaults occurred and the PSP was forced to intervene.

“When the intervention occurred, the England fans turned on the police and two officers were injured.”

The two supporters were arrested on suspicion of assault and are expected to appear in court later today.

The third man’s name and address were recorded and he is not expected to be hauled before a judge.