Thanks to the coronavirus pandemic, this Christmas won't feel particularly festive for a lot of people.

However the weather might help a little, with bookmaker Coral making it odds-on for a White Christmas, meaning snow in any major UK city on December 25.

White hills, snowmen and falling snowflakes always make things feel Christmassy — but could 2020 be one of the last years it happens?

Climate change causes global temperatures to rise, which could mean that one day it will simply be too warm for snow to fall over Britain.

But according to some scientists, there's also evidence to suggest Britain could experience another Ice Age, similar to the one that caused the River Thames to freeze.

"Average winters are expected to continue to get warmer as we move through this century," Dr Ben Booth from the Met Office Hadley Centre told the Daily Star.

He added: "Whilst cold winters are expected to become less frequent, we can still expect to experience cold ones."

Met Office spokesman Grahame Madge added: "By 2080, if we do not curb greenhouse gas emissions, ice-days (when the temperature remains below freezing all day long) will no longer occur across much of England and will be largely confined to the north of the UK.

"Along with this we see a big decrease in lying snow such that by 2080, under the high emissions scenario, lying snow will largely be confined to high ground." However Stephan Harrison, Professor of Climate and Environmental Change at the University of Exeter, says the answer is more complicated for the UK than the rest of the world.

"Where we are in the North Atlantic is very interesting because south of Greenland is a cold spot which has been there for decades and scientists predict it will continue," he told the Daily Star.

"It's one of the only places in the world that's actually cooling."

Increased ice melt is causing severe disruption to the Gulf Stream, an enormous circulation system which moves Caribbean water to the Arctic, where it cools and moves back south.

The Gulf Stream moves millions of cubic metres of water per second, much more than the Amazon River. If it were to "switch off", Prof Harrison says it would be "like turning off all the energy in your house".

The Gulf Stream has weakened in the past, which resulted in the planet's last Ice Age some 10,000 years ago. There was also a period in the 1600s called the Little Ice Age in which the Thames froze over.

Scientists warned in 2018 that the Gulf Stream was at its weakest ever recorded (although records are short), and Prof Harrison explained its collapse could result in Britain experiencing much colder winters than climate science would otherwise indicate. "The Gulf Stream has switched on and off in the past. If it switches off [the UK] would get much colder, and lots of people are saying the Gulf Stream will weaken this century.

"So we may end up one of the few locations with colder winters."

He said the "unique" existence of the Gulf Stream proves the need to be wary of relying solely on climate model predictions which can be "quite simplistic", especially when treating regional climate change.

While the prospect of snowier Christmases in the years to come might seem like a net positive, a Gulf Stream collapse would have its own devastating consequences such as worsening storms in Europe and faster sea level rise on the East Coast of the United States. 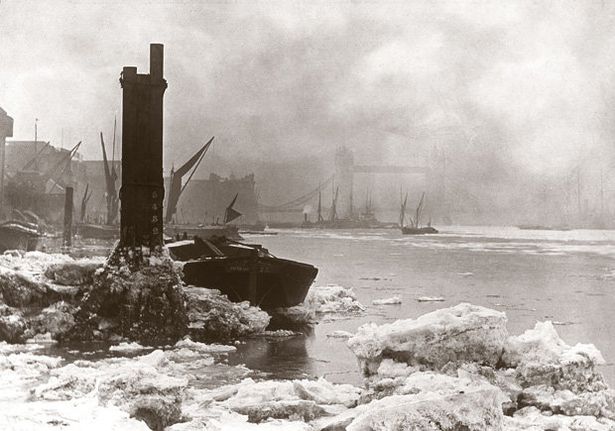 When snow does fall, it will be much heavier than now as a warmer atmosphere can hold more water vapour.

"You could argue the weakening of the Gulf Stream is a good thing, but it's a very local regional thing in just our little part of the globe," Prof Harrison said.

"When you consider how climate warming will affect systems like monsoons in Asia and the rest of the world, it's a small drop in the ocean."

If we want to save the White Christmas without causing enormous environmental damage, the UK must work on decarbonising its energy supplies and improving carbon capture and storage, in which carbon is taken out of the atmosphere and stored in deep oil wells.

Driving energy efficient cars and eating less meat would also help, Prof Harrison said, adding that sadly the decimation of air travel during the pandemic has so far had "relatively little impact" on emissions.

However he says the lightning-fast vaccine developments of 2020 have made him more optimistic about our ability to handle the climate crisis, as "science is an amazing thing".