British woman, 50, is raped while unconscious in the street at 3am in Mallorca before witnesses drag attacker off

A 50-year-old British woman has been raped while lying unconscious in the street on the Spanish holiday island of Mallorca.

The woman was attacked around 3am Sunday in the Les Meravelles area, south of the island capital of Palma.

Horrified witnesses dragged the attacker away before calling police, who arrested a German man in his 40s a short time afterwards. 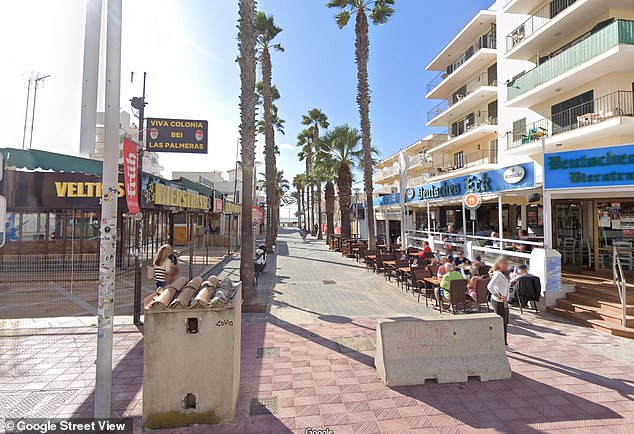 A German man in his 40s has been arrested after a 50-year-old British woman was raped around 3am Sunday while lying unconscious on this street in Playa de Palma, Mallorca

The man has been arrested on suspicion of sexual assault and taken to a police station for questioning, Diario de Mallorca reported.

Meanwhile the woman has been transferred to a local hospital.

According to local reports, the attack happened on a street close to the beach that is filled with bars and restaurants and is a popular night-time spot.

The attack happened in front of dozens of witnesses in the middle of the street, according to Ultima Hora.

Investigators believe the suspect and the victim knew each other, and may have met in a bar earlier in the day.

Investigations are ongoing, and no charges have yet been brought.