Jeremy Corbyn’s WIFE piles into Labour civil war sparked by Alastair Campbell’s expulsion for voting Lib Dem and crows: ‘The man who supported the illegal war in Iraq has gone!’

The scandal over the expulsion of Alastair Campbell arrived at Jeremy Corbyn’s front door today after his wife crowed over his departure from Labour.

Laura Alvarez revelled after Tony Blair’s former spin doctor was thrown out of the party for voting Lib Dem in the European elections under a Facebook post titled: ‘Good riddance’.

Ms Alvarez, a Mexican-born former banker turned coffee bean importer, wrote under it: ‘The man who supported the illegal war in Iraq has gone’.

And in a post on a pro-Corbyn group discussing Tom Watson’s pursuit of a second referendum she said: ‘Alastair Campbell always sabotaged the leadership of the LP [Labour party], but now he moved to support the Liberal Democrats’.

Ending her attack with an accusation Mr Blair’s former right-hand-man is right-wing, she said: ‘Maybe he can help them to develop more austerity policies’. 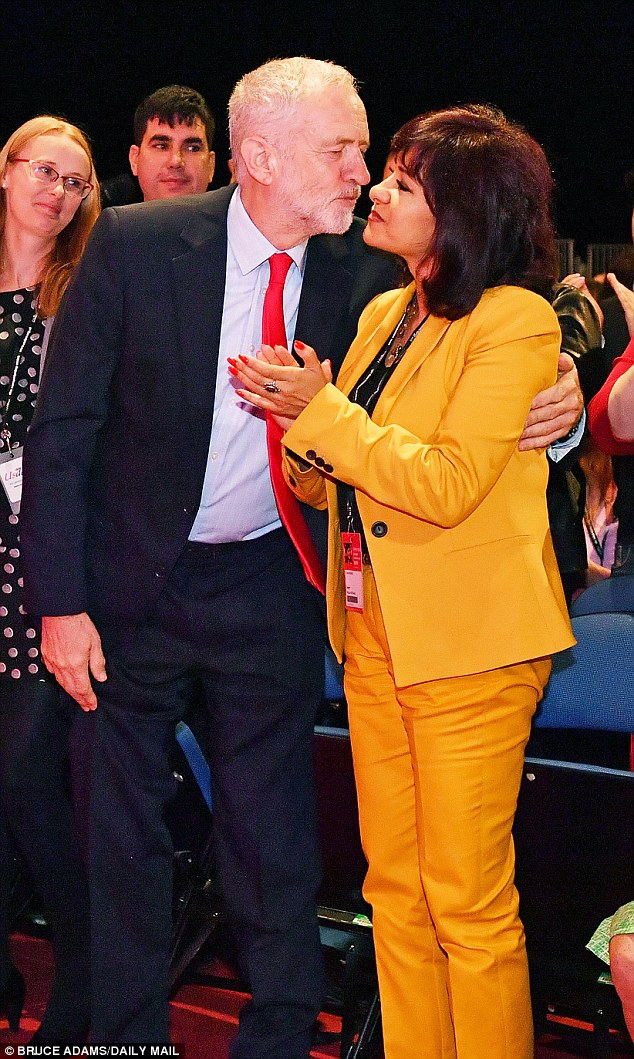 Jeremy Corbyn kisses his third wife Laura Alvarez after winning the Labour leadership in 2015. His wife weighed in to the debate on Alastair Campbell’s expulsion

Ms Alvarez, a former banker, accused Mr Campbell of sabotaging numerous Labour leaders and hopes he turns his attentions to the Lib Dems after he voted for them 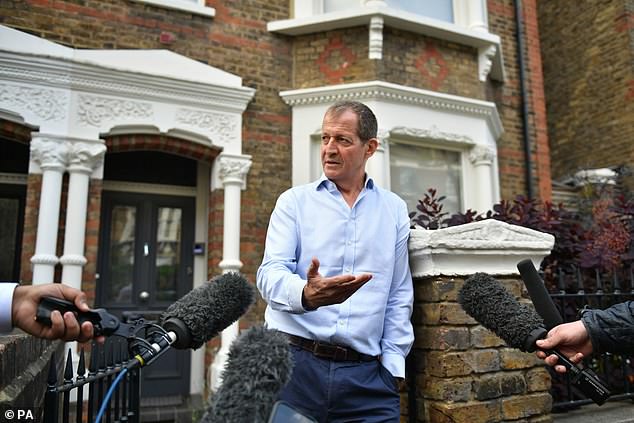 Former No10 spin doctor Alastair Campbell (pictured speaking to reporters at his London home this week) said John McDonnell and Keir Starmer had told him the decision to eject him for voting Lib Dem at the EU election should be reviewed.

Alastair Campbell has hit back and accused Mr Corbyn and his wife of re-writing history to ignore his support for leaders going back decades. 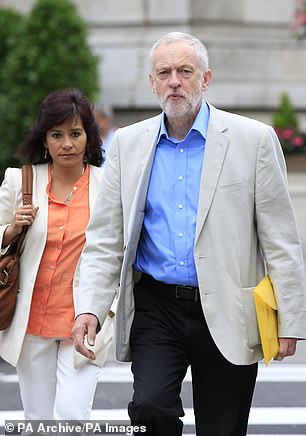 He said: ‘I guess “always sabotaged the Labour leadership” means that chez Corbyn, Foot, Kinnock, Smith, Blair, Brown, Miliband have all been excised from the history books. Labour began with JC’.

Mr Corbyn’s third wife, who is 20 years younger than the Labour leader, met the Islington MP in 1999 when she flew to Britain after her seven-year-old niece was abducted by her father following a custody battle.

Marcela went to Tony Benn for help and was introduced to Corbyn, MP for Islington North. She said: ‘He made calls and did everything he could to help. Without his assistance I would never have been reunited with Jasmin.’

In 2012 they married on a 400-year-old estate to the south of Mexico City. While her siblings and parents attended the ceremony and champagne reception, it is understood that Corbyn was accompanied by a single friend, and none of his family.

His first wife Labour councillor Jane Chapman called time on their union after growing fed up with her husband’s obsession with politics and attending committee meetings.

A recent biography of Mr Corbyn said: ‘They rarely went out together. Dinner invitations were refused. Chapman spent lonely evenings in their small flat with Mango the dog and Harold Wilson the cat as her only companions while Corbyn met political cronies’.

His second wife, fiery Chilean campaigner Claudia Bracchitta, drew the line after 12 years of marriage at his refusal to allow the eldest of their three sons to go to grammar school. Mr Corbyn himself attended a fee-paying school followed by a grammar school. 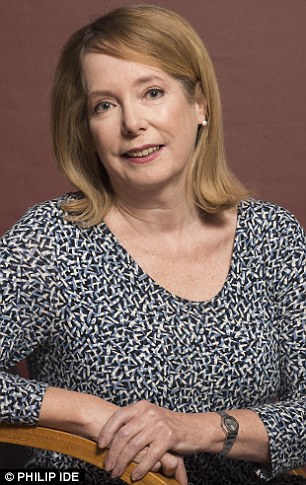 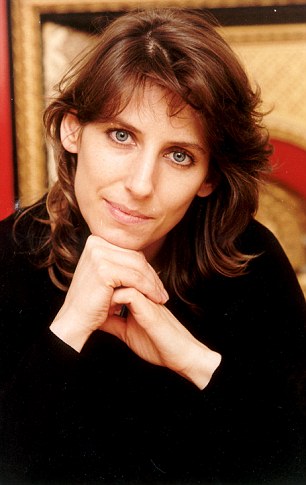 Professor Jane Chapman, the first wife of Jeremy Corbyn, says their marriage failed because of his obsession with politics. His second wife Claudia split up with him because of a row over wanting to send their son to a grammar school, like the Labour MP had 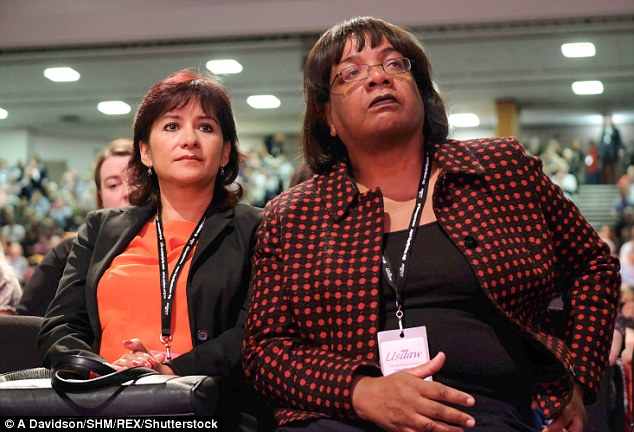 Ms Alvarez with Diane Abbott, with whom her husband reportedly had a brief relationship with in the 1970s and rode around communist  East Germany together on a motorbike

Although Corbyn was separated from his first wife Dr Chapman, she recalled this week how Abbott confronted her at her home and told her to ‘get out of town’.

As for Ms Bracchitta, Corbyn’s elder brother Piers has hinted they split before the school row, having ‘fallen out of love with each other after finding attractions elsewhere’.

Asked if his brother was unfaithful, Piers said: ‘Something like that must have been going on when they finally split up, but I don’t know who was bad first.’

In 1999, the year of Corbyn’s divorce from Ms Bracchitta, he met his current wife Ms Alvarez. They live in a £1million Islington home together and spend time together down at their allotment.

Earlier today Mr Campbell stepped up his war with the Labour leadership today – claiming that even Jeremy Corbyn’s closest allies think it is ‘bonkers’ to kick him out of the party.

The former No10 spin doctor said John McDonnell and Keir Starmer had told him the decision to eject him for voting Lib Dem at the EU election should be reviewed.

The latest salvo came after Cherie Blair made it known she also did not vote Labour in the poll last week, and is instead thought to have supported the pro-EU Lib Dems.

Mr Corbyn is facing all-out mutiny from Remain supporters, who have been infuriated at his refusal full-heartedly to back a second Brexit referendum. 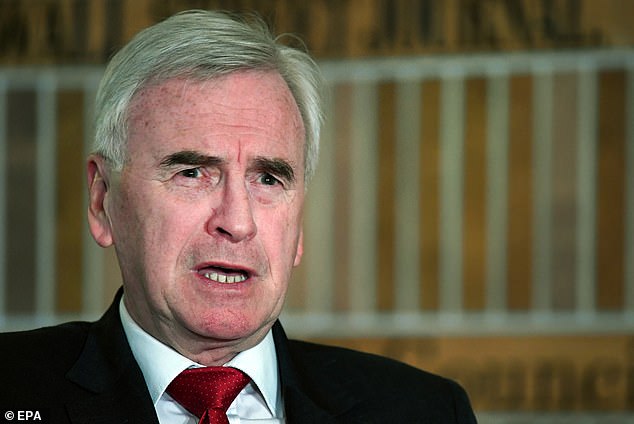 Mr McDonnell (pictured earlier this month) agrees that the expulsion is ‘bonkers’, according to Mr Campbell

There has been an #expelmetoo backlash on social media, and deputy leader Tom Watson has branded the move – which is now being reviewed – ‘spiteful’.

Mr Campbell, Mr Blair’s former spin doctor, was ousted from Labour on Tuesday after he admitted backing the Liberal Democrats because, unlike his party, they were strongly in favour of a so-called People’s Vote.

Mrs Blair’s husband, former PM Tony Blair, has said he voted Labour but ‘without any enthusiasm’.

Mr Campbell, who is appealing against his expulsion from the party, pointed to comments from Attorney General Baroness Chakrabarti yesterday saying there would be a review.

He told BBC Radio 4’s Today programme: ‘The reason there is no justification for this expulsion is because, as Shami Chakrabarti said yesterday, a tactical vote is not a reason for expulsion.

‘The only evidence provided to me were three cuttings covering what I’d said after the event, after the polls had closed, after the results had come in.’

Defending comments on the eve of poll where he said he understood people who were not planning to vote Labour, he said: ‘That’s hardly campaigning for another party.’

‘I have had it clearly spelt out to me from Keir Starmer, John McDonnell – I’ve heard it publicly from Shami Chakrabarti, Tom Watson and Emily Thornberry – they all think this decision is bonkers and they all think it should be reviewed.’ 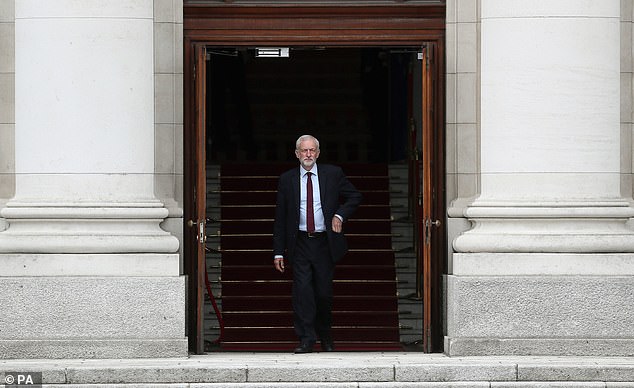 Mr Corbyn (pictured on a visit to Dublin yesterday) is facing all-out mutiny from Remain supporters, who have been infuriated at his refusal full-heartedly to back a second Brexit referendum 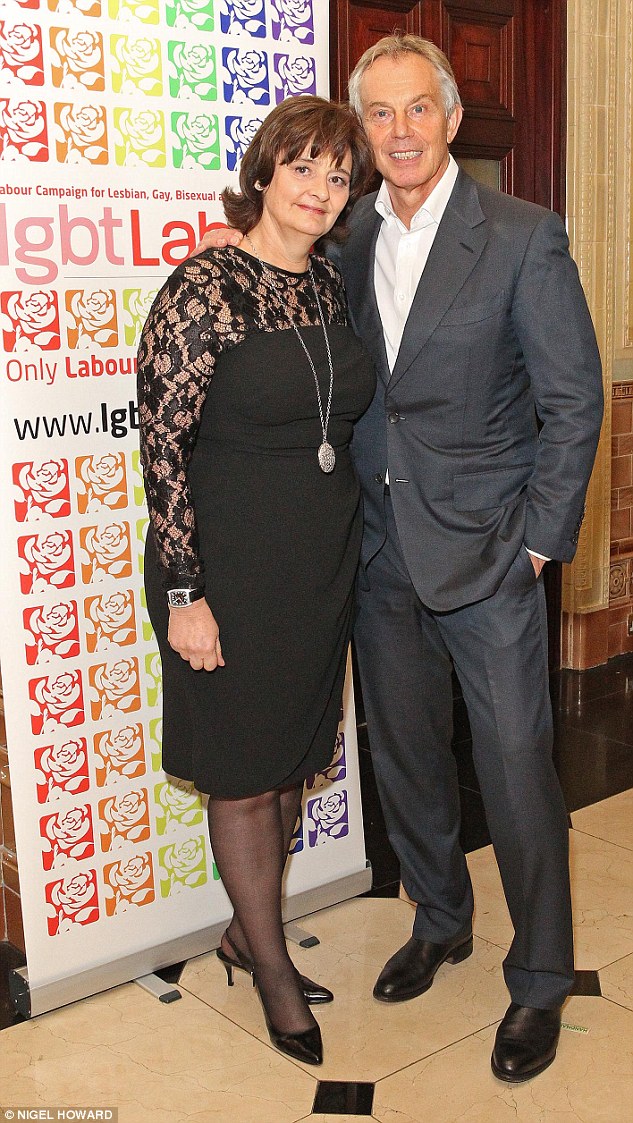 Sources close to Mrs Blair (file picture with husband Tony) made clear she did not support Labour in the polls last week – amid claims she too backed the Liberal Democrats. Tony Blair has said he voted Labour ‘without any enthusiasm’

‘Jeremy Corbyn talks about listening to members but he is actually only listening to a very, very small clique around him.

‘Jeremy Corbyn needs to decide: is he going to listen to the many – the public, the members, the MPs – or listen to the few: Seamus Milne, Carrie Murphy, Len McCluskey and Andrew Murray?