Queensland recorded two new cases of COVID-19 on Sunday, both of them detected in people already in quarantine.

The cases emerged as Premier Annastacia Palaszczuk again hit out at critics of her government’s coronavirus policy, this time on the issue of Hollywood movies filming in Queensland and actor Tom Hanks. 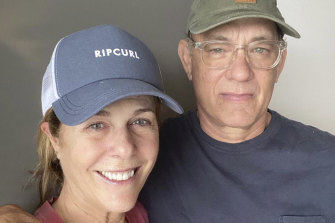 Tom Hanks, with wife Rita Wilson, was quarantined in Australia earlier this year before returning to the US. Now Hanks is back to film the “Elvis” biopic.

News Corp reported on Sunday that Hanks is staying at a lavish estate in the Gold Coast hinterland at a cost of more than $6000 a night.

Hanks and his entourage were granted entry to the country by federal agencies and were allowed to quarantine under their own arrangements and at their own expense.

Ms Palaszczuk said she had been told Hanks was in quarantine in "a hotel" ahead of resuming filming on Baz Luhrmann's Elvis biopic.

The Premier then went on the attack, saying other people had travelled from LA to Sydney but were not getting the same media coverage.

"They would have had to get the exemptions and the Border Force checks as well for them to come into NSW," Ms Palaszczuk said.

"But unfortunately, we’re not hearing anything about that in NSW; all we are hearing is about Queensland."

Ms Palaszczuk said because of Queensland’s tough measures to stop the spread of COVID-19, productions like the Elvis movie were able to go ahead.

"Very few places are producing movies at the moment, but Queensland is able to do that; we’re able to support the industry and get people back into work," she said.

"Scott Morison, the Prime Minister, flew up to the Gold Coast. Remember when Melbourne was having its second wave, he was here on the Gold Coast talking about how good the film industry is. So I’m not going to cop this negativity."

One on Sunday's new cases was an international traveller who had returned to Queensland and the other was a known contact of an existing case from the corrective services cluster.

It's a race around the clock for contact tracers in Sydney after a taxi driver worked nine shifts while he was infected with COVID-19.

The man's infection was reported last week. It is believed he was driving passengers for nine days while infected around the west and south-western suburbs of Sydney.

Early investigations indicate his infection may have been acquired at Liverpool Hospital.

People who caught a taxi on September 7, 8, 9, 10, 14, 15, 16, 17 and 18 in the following suburbs must get tested as soon as they develop any symptoms: Moorebank, Bankstown, Chipping Norton, Liverpool, Lidcombe, Warwick Farm and Milperra.

The driver also visited venues in Campbelltown and on the South Coast. Anyone who visited the venues during certain times should self-isolate.

On Sunday morning NSW reported its first COVID-related death in five weeks when a man in his 70s died on Saturday. His infection was linked to the Sydney CBD cluster.

One of the two new cases in the 24 hours to 8pm on Saturday night was a returned traveller in hotel quarantine, while the other was locally acquired.

NSW workers will now have access to the federal government's paid pandemic leave program after Premier Gladys Berejiklian opted in to the scheme that pays people without sick leave $1500 when they are required to self-isolate.

Now to Victoria, where the weekend's warm sunshine and blue skies also brought some much-needed good news on the COVID-19 front.

Victoria recorded its lowest daily rise in COVID-19 cases in almost three months on Sunday with 14 new cases. Mr Andrews declared the figure and declining numbers overall was "cause for great optimism and positivity".

The Premier flagged he would make "significant announcements" on September 27 as Melbourne is set to move into step two of the road map out of lockdown, but urged Victorians not to become complacent.

Nine of the new cases announced on Sunday have been linked to known outbreaks. The Casey cluster in Melbourne's outer south-east has now grown to 43 people, 30 of whom are active cases.

The new cluster had raised fears that it could compromise the city's road map out of lockdown, when Melbourne moves into step two at midnight on Sunday, September 27, allowing child care centres to reopen, some students return to school, and permitting up to five people to gather together outdoors.

Mr Andrews said the Casey outbreak had been "expertly handled", and he was confident all of the close contacts had been traced and were being monitored for coronavirus symptoms.

"This is a good day, though," the Premier said. "A day where Victorians can be proud of the work that they've done, their commitment, their resolve to see this off; to defeat this virus in its second wave properly, comprehensively and sustainably. We can hope to keep numbers low, and that's where the trend is going."

First off, let's take a look at the global figures according to Johns Hopkins University this morning.

Tens of thousands of COVID-19 cases are now emerging in Europe each day, with the global tally now passing 30.8 million, while the death toll has exceeded 958,000.

On a positive note, more than 21.1 million people have recovered from the virus. You can explore our data centre (below) for the latest figures across the world:

Good morning, it's Marissa Calligeros here, joining you for our coronavirus coverage on this Wednesday. For those of us who are counting, Melbourne is 50 days into its extended stage four lockdown.

Here's a tune for those feeling Mondayitis today …