US President Joe Biden has asked intelligence agencies to “redouble” their efforts to find out the true origin of the COVID-19 outbreak – claiming China has not been “transparent enough” so far.

An international team of World Health Organisation scientists, working with experts in China, had been researching how the pandemic began, and as part of its work, visited the province of Wuhan where the first cases were reported.

The team was accompanied by Chinese officials at all times, but did speak to patients, first responders and local scientists, and in the end concluded the novel coronavirus most probably jumped from animals to humans.

Another unlikely theory is that it may have originated in a laboratory accident.

However on Wednesday, Mr Biden said he did not feel there had been sufficient information to determine exactly where the coronavirus had come from, and he has now asked a team of intelligence officers to investigate again.

He has also asked for more “specific questions” to be asked of China and admitted US intelligence was divided on the question of where COVID-19 emerged from.

He called on “like-minded partners around the world” to press China to participate in a “full, transparent, evidence-based international investigation”. The Biden administration was responding both to domestic and geopolitical concerns about putting pressure on China to be transparent about the outbreak.

Republicans, including former President Donald Trump, have promoted the theory the virus emerged from a laboratory accident, rather than naturally through human contact with an infected animal.

Analysis: The three theories about the virus’s origins

In a statement, Mr Biden said the majority of the intelligence community had “coalesced” around those two likely scenarios but “do not believe there is sufficient information to assess one to be more likely than the other”. 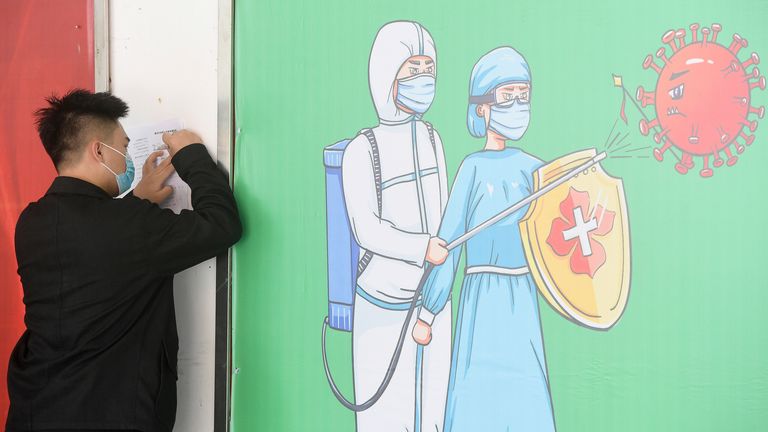 He revealed two of the 18 intelligence agencies lean towards the animal link and “one leans more toward” the lab theory, adding, “each with low or moderate confidence”.

Biden directed US national laboratories to assist with the investigation and called on China to cooperate with international probes into the origins of the pandemic.

“The United States will also keep working with like-minded partners around the world to press China to participate in a full, transparent, evidence-based international investigation and to provide access to all relevant data and evidence,” he said.

And Mr Biden warned a firm conclusion may never be known, given the Chinese government’s refusal to fully cooperate with international investigations.

“The failure to get our inspectors on the ground in those early months will always hamper any investigation into the origin of COVID-19,” he added.

Andy Slavitt, Biden’s senior coronavirus adviser the world needs to “get to the bottom … whatever the answer may be”.

He added: “We need a completely transparent process from China; we need the WHO to assist in that matter.