Cowboy builder, 61, who was jailed for ripping off pensioner couple must now demolish his OWN illegally-built house or go back to prison

Bill Simpson, 61, of Hinton, Suffolk, is pictured outside London’s High Court where he has been ordered to tear down his illegal house

A cowboy builder jailed for ripping off an elderly couple has been ordered to demolish his own house or go back to prison.

Bill Simpson, 61, of Hinton, Suffolk, was jailed for 21 months in 2015 after charging pensioners £16,000 to repair a broken roof tile on their bungalow.

He was banned from ever working as a builder again after he billed another elderly customer £1,175 for a £500 job on their driveway.

But now a High Court judge has told him he must tear down his own home or go back to prison for two months.

He has lived in the one-storey brick property in the East Suffolk Area of Outstanding Natural Beauty for 10 years without council permission.

He was issued with a court order to demolish it but was forced to admit contempt of court when he continued to ignore it.

He was given a two-month suspended jail sentence, which he was told he would serve if the house wasn’t destroyed by September this year.

‘Mr Simpson, it is to your credit that you have admitted this contempt.

‘The future is now for you to resolve, you understand that – it’s demolition or prison, I’m afraid.’

He was handed court orders twice last year, demanding he remove hardstanding and pull down the house and dispose of the debris.

But when East Suffolk Council officers visited in December and January, they found he had not complied in the time he was given.

Planning officer Catherine Buck said she had visited the site in December and peeled back grass to find hardstanding underneath.

And when she went back in January, she found Mr Simpson inside the house.

‘I banged on the door and it was opened by a man I know to be Bill Simpson,’ she said.

The case reached the High Court as the council applied to have Mr Simpson sent to prison for not complying with the court orders in time.

Although he had belatedly complied with the order to remove hardstanding, he had failed to tear down his house, the court heard.

Through lawyers, Mr Simpson admitted he was in contempt and was handed a two-month sentence, suspended for 12 months.

He has been given until September 3 to finally demolish the house. 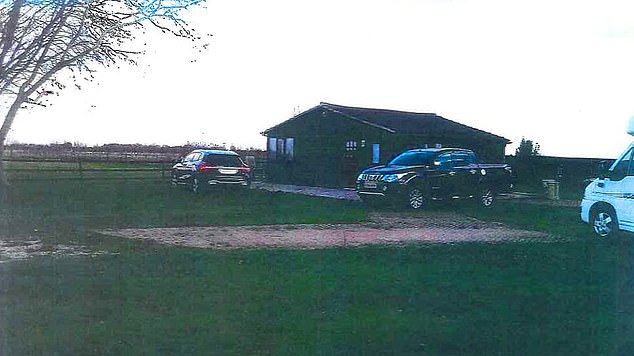