The magnificent seven: As the Normandy memorial is unveiled, seven veterans of the historic battle reveal their thoughts on the 75th anniversary of D-Day

Theresa May and President Macron gave heartfelt personal thanks to seven D-Day heroes yesterday at the inauguration of a long-awaited British memorial.

The Prime Minister gripped the hands of the seven and told each one: ‘Thank you for what you did.’

The French leader spoke in English to the seven survivors who were the guests of honour at the emotional ceremony overlooking Gold Beach.

Some were in tears as they gazed at the sands they charged across 75 years ago to the hour and the day – while around them their friends were cut down by German gunfire.

But one of the seven, Harry Billinge, 93, of St Austell, Cornwall, declared: ‘Don’t say I’m a hero. I was lucky. The heroes are the ones who are dead.’

The seven men were back yesterday to help unveil a magnificent statue which is the centrepiece of the project to create a British Normandy Memorial. 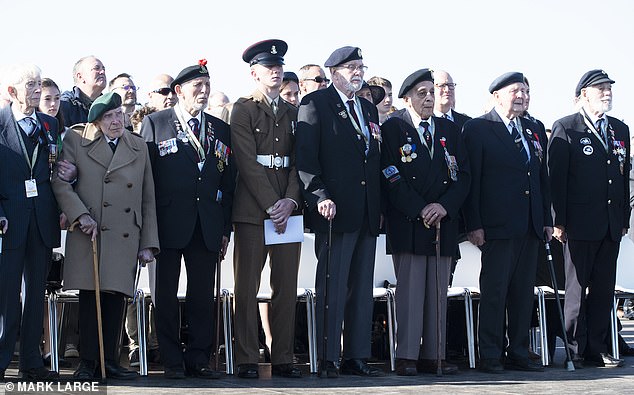 A petty officer on the frigate HMS Mounsey, Ronald Clements helped protect troops as they approached the beaches.

He dropped depth charges on U-boats with ‘little success’, including one which had sunk an Allied troop ship and was later destroyed by a Canadian warship.

Mr Clements, of Whitstable, Kent, said he was not scared, despite heavy shelling around the ship. Now 98, he said it was ‘fantastic’ that the memorial was being built. 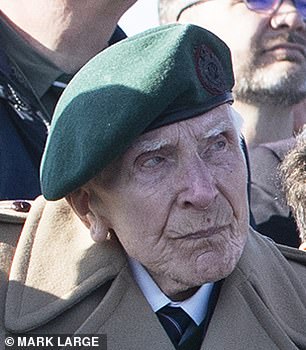 Harry Billings says he is lucky to be alive

This is my swansong

Harry Billinge says he is very lucky to be alive, because he was in the first wave ashore on Gold Beach at 6.30am on D-Day, as an 18-year-old Royal Engineer.

Mr Billinge, 93, a Cockney who has lived in Cornwall for 70 years, has raised £10,000 for the memorial, collecting in St Austell.

He said: ‘When I heard about the monument I thought, ‘This is what I’ve been kept for – to collect for that’. I shan’t be going again, I don’t think. This is my swansong.’ 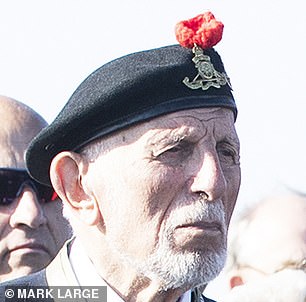 Joe Cattini drove up Gold Beach on D-Day in a three-ton ammunition truck loaded with 25lb shells and dozens of cans of petrol.

Mr Cattini, 96, of Southampton, recalled: ‘The wagon in front of me hit a mine and blew up.

The former Royal Artillery soldier said he had at first thought he was on another exercise.

He added: ‘It wasn’t until the barrages opened up that you really felt afraid.’ 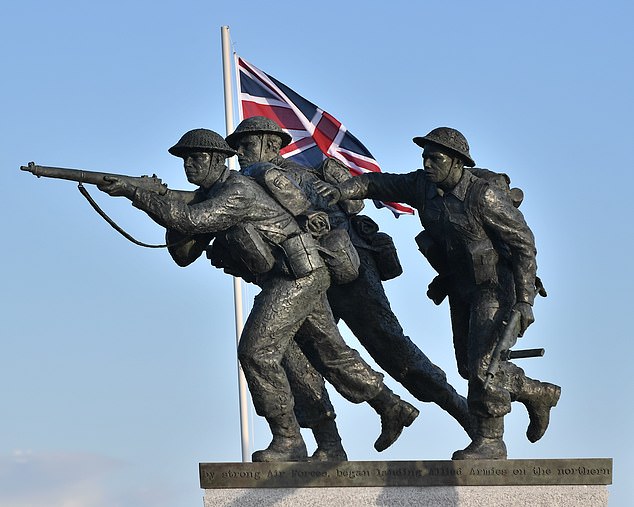 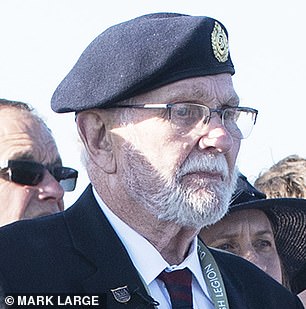 George Batts was just 18 on D-Day

I left a lot of mates there

George Batts, an 18-year-old sapper with the Royal Engineers on D-Day, came up with the idea for the memorial, having previously established a project to record interviews with 172 veterans who survived Operation Overlord.

The 92-year-old veteran, from Maidstone, Kent, who has been awarded the Legion d’Honneur and an MBE, said: ‘It means everything to me. It was my dream. We left a lot of mates there and I am so proud.’ 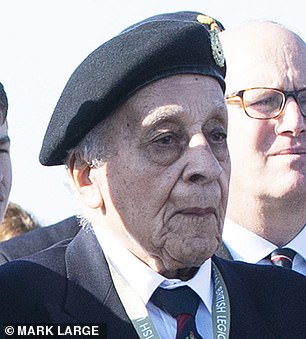 Patrick Moore landed on Juno Beach as a Royal Engineers sapper of 23, with the job of sweeping the beach of mines.

He was also given another task – clearing away bodies. Mr Moore, 98, from Kent, said: ‘Amongst the dead I found a Canadian doctor and his first aid bag.

‘I wish I could have told his next of kin that his loss had not been a total waste as his first aid bag provided sterling service through France, Belgium and up to the Dutch border.’ 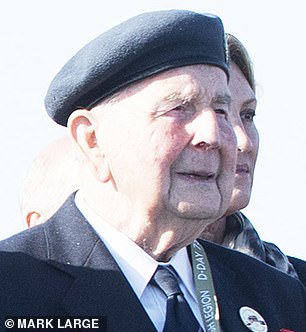 Tears for my friends

David Woodrow was a spotter in a reconnaissance aircraft from the RAF’s 652 Squadron.

On D-Day, he landed on Gold Beach and went to Bayeux where he sat outside the cathedral.

He returns there every year. Now 95, he still works on his farm near Norwich.

When asked what Theresa May’s words had meant to him, he gazed across the sands and said: ‘She was saying thank you to my friends … my friends that I lost,’ before he was overcome with tears. 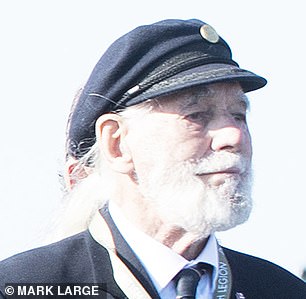 Jim Radford, 90, is the youngest of the veterans and was just 15 on D-Day

I can still see their faces

Jim Radford, 90, is the youngest of the veterans.

On D-Day he was a 15-year-old landing craft cabin boy. Mr Radford, originally from Hull but who now lives in Lewisham, south London, has recorded a moving ballad, The Shores of Normandy, which it is hoped will gain a place in the music charts this week.

He said its lyrics echo his memories of seeing young men ‘run up the beaches into machine gun fire’, adding: ‘I can still see their faces now.’