Father-of-six, 33, melts the skin off his foot and suffers fourth-degree burns after stepping on scorching sand where he had been using a disposable barbecue

A father-of-six suffered fourth-degree burns on his foot after stepping on ‘absolutely scorching’ sand where he had been using two disposable barbecues.

Danny Howard, 33, was enjoying a day out at Barmouth Beach on the west coast of Wales with his wife and six children on May 30 when stepped on the hot sand after moving two disposable barbecues from the area.

The self-employed plasterer, from Chester, described the burn from the sand as the ‘most excruciating pain’ he had ever felt in his life and that the heat ‘melted’ his skin.

Mr Howard and his family had to drive two hours to a hospital in Chester for treatment, where the father was given morphine to alleviate the agonising pain. 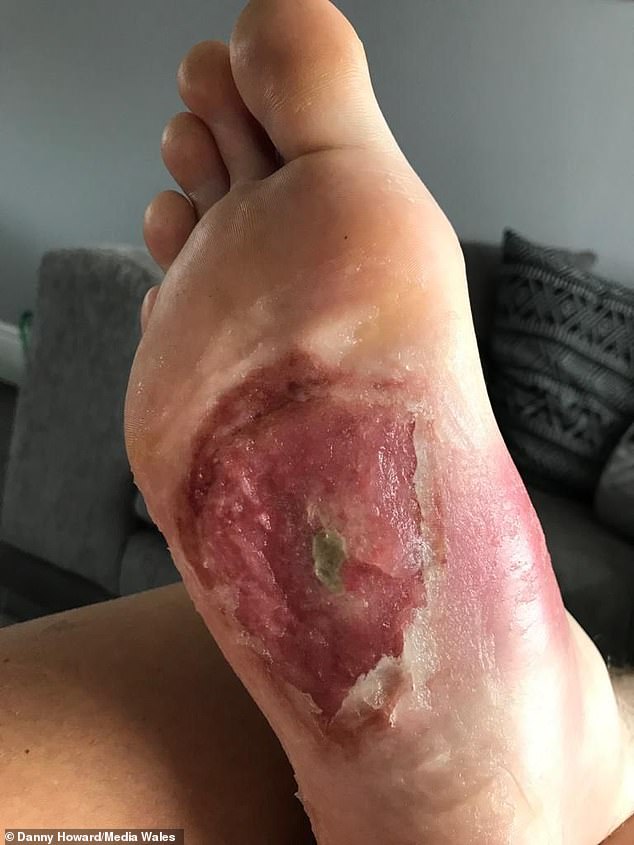 Father-of-six Danny Howard, from Chester, suffered fourth-degree burns (above) on his foot after stepping on ‘absolutely scorching’ sand where he was using a disposable barbecue

Now nursing his wound at home, Mr Howard wants to emphasise the dangers of disposable barbecues in sandy areas – particularly if there are young children around.

The accident took place after Mr Howard and his wife had used two disposable barbecues to cook burgers, sausages and hotdogs.

After cooking the food, Mr Howard decided to move the barbecues to a safe distance away from the children, not realising the sand had gathered up all the heat from the coal.

Disaster struck when the father then stood on the sand exactly where the barbecue had been just an hour after arriving at the beach.

Recalling the agonising pain, Mr Howard said: ‘On a scale of one to ten, I’d put it at 25.’

Though the barbecue trays – which had been burning for about 45 minutes – were cold by the time Mr Howard moved them, he said the sand had worked as an insulator on the hot day.

He continued: ‘Sand is just like glass at the end of the day, so it’s just going to absorb all of the heat.’

Although the top layer of sand was slightly cooler, Mr Howard’s foot sank around half an inch deeper where the scorching temperature ‘absolutely melted’ the skin on his sole. 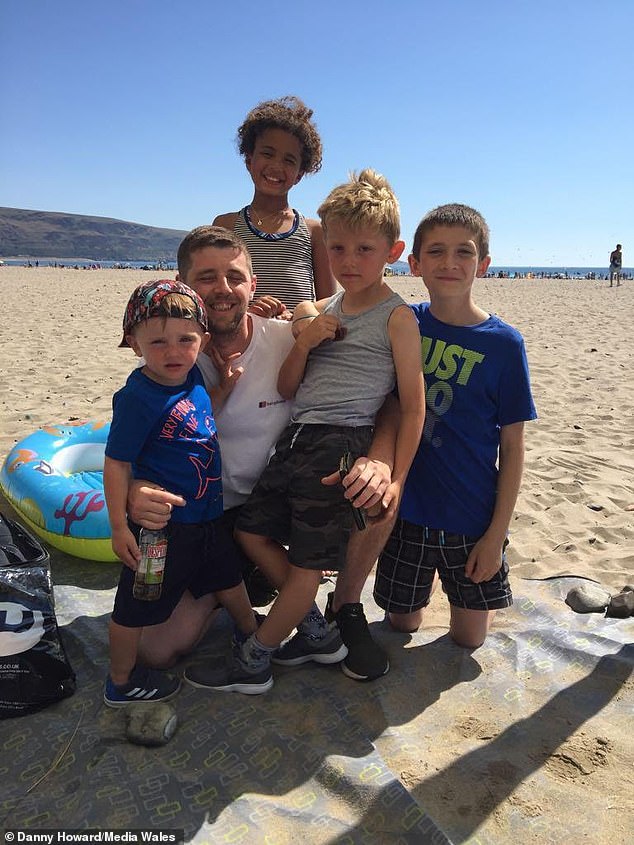 Mr Howard (pictured with children), 33, was at Barmouth Beach, west, Wales with his wife and six children on May 30 when stepped on the hot sand after moving the barbecues out the way

He also blistered in-between his toes as well, while he ended up with second, third and fourth-degree burns on the sole of his foot.

With their cars parked far away, Mr Howard said he had to grit his teeth and walk with just a sock on his blister while they carried their belongings back over the sand dunes.

The father spent two hours driving his kids home to Chester, as they had brought two cars, before finally taking himself to the hospital.

He recalled using his ‘big toe’ to drive his van and admitted he doesn’t know how he did it.

He considered going to a nearer hospital but said by the time they left it was already 9pm and getting late for his young children, who are aged between 18 months and ten years old.

Mr Howard said: ‘They’d been driving for four hours just to be out of the vehicles for an hour. I felt like I’d ruined their day to be honest.

‘I didn’t want them to be hanging around in a hospital, so I got them home first and I went straight to Chester A&E.’

When he got to the hospital, medics cut away the thick blister that had formed, while the hot sand had seared through two layers of his skin.

Mr Howard was bandaged up before being sent home with ibuprofen and paracetamol.

But these did nothing to reduce the unbearable pain, which he said has nearly left him in tears.

Mr Howard said: ‘I had to go back the next day because the pain was excruciating.

‘They re-bandaged it and there was thickening, forming a hole in the centre. Thickening is what they call a fourth degree burn.’

After being given codeine, which he also said did nothing to reduce the pain, Mr Howard was transferred to a burns specialist centre in Whiston on Friday, where he was given morphine and strong anti-inflammatories. 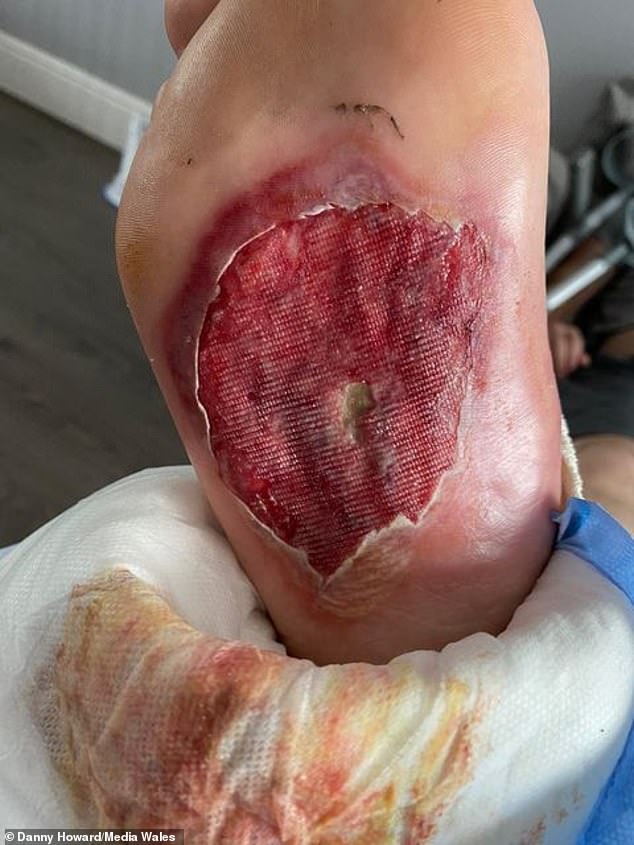 Doctors told him that if he had gone to the burns specialist unit straight away, he might have been able to have a skin graft for the fourth degree burn.

But because the area around the hole had started healing, a graft would have simply caused more damage.

The doctors at Whiston wanted put Mr Howard on a 24-hour drip in the hospital as there were signs of infection in his leg, but he chose alternative treatment to suit his busy home life.

Mr Howard is currently managing the ‘agonising pain’ at home with the painkillers as he waits for the hole to heal.

He is unable to walk at all, but is managing to hop and crawl around about two or three hours after taking his medication in the morning.

The rest of the time, when his foot is relaxed, there is a throbbing sensation in his foot, which feels like ‘it has its own heartbeat’.

He anticipated that he will have to stay home and heal his foot for six to 12 weeks, with weekly appointments at the burns unit, before he can return to work or live normally.

He said: ‘I don’t think my foot will ever be the same again.’

Mr Howard, who is worried about losing money as he cannot work for his plastering business, will then have to get physiotherapy to get his foot stretched.

He is currently relying heavily on his wife, who he said has been ‘the superhero of the house’ by bathing his foot, changing his bandages and looking after their children.

Mr Howard said: ‘In the mornings I’m literally crawling around on my hands and knees. She’s been my absolute rock.’

Mr Howard said he wants to raise awareness of the dangers of such barbecues on beaches, especially if young children are around. 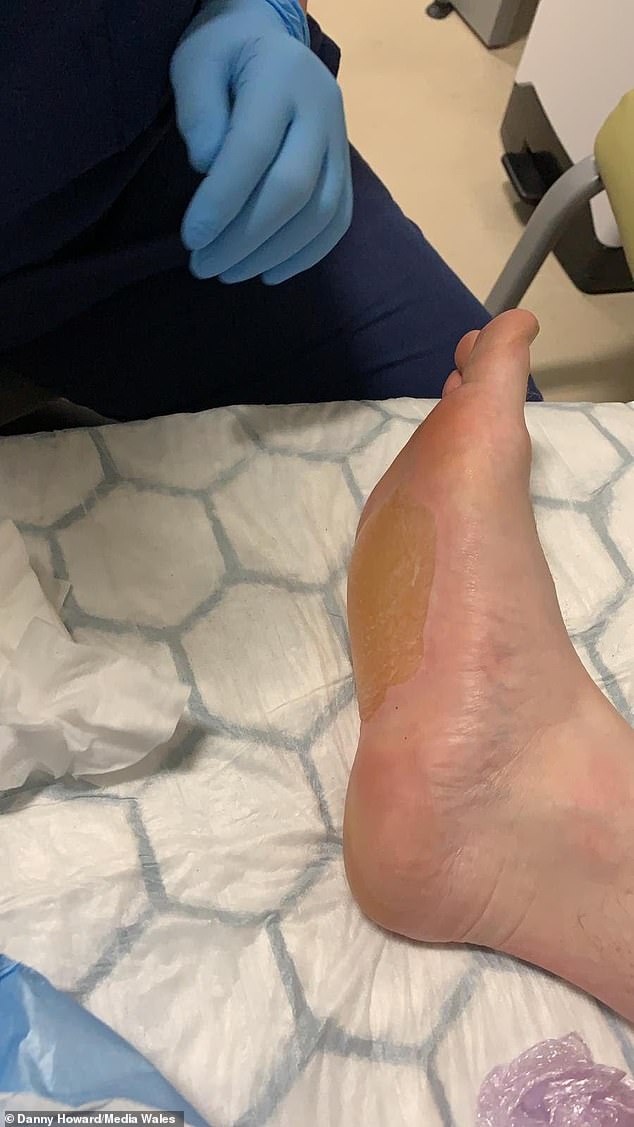 Now nursing his wound (pictured) at home, Mr Howard wants to emphasise the dangers of disposable barbecues in sandy areas – particularly if there are young children around

‘I’ve got an 18-month-year-old, a four-year-old, a five-year-old and I thought if one of them had touched it it would have just obliterated their feet,’ he said.

He said while he is aware of the dangers he did not expect that amount of heat to come from the sand.

He added: ‘It’s not something you consider a risk. You think the children are more at risk from falling onto it and stepping onto it – that’s what you tend to look out for. I think these barbecues should have a warning to take more care and precautions on sandy areas.’

Mr Howard also pointed out that it’s impossible to tell how hot the sand is where the barbecue has been.

He believes the heat can be ‘trapped there for an hour or two easily’, posing a risk to unsuspecting walkers.

Mr Howard also thinks that the barbecue kits should come with signs that users can put up to mark out the area where a barbecue has been used.

He said: ‘If I’d never stood on the sand and I’d packed up my barbecue and gone away, somebody could have walked across that spot five minutes with their dog or a small kid and nobody would have known. You can’t even tell the sand is hot.’

His accident comes after it was reported this week that a nine-year-old boy’s foot ‘melted like wax’ in the exact same scenario.

Will Tyler, from Stockport, Greater Manchester, needed a skin graft after he stepped on hot sand where his parents set up a disposable barbecue.