A hapless dealer has left a bag of various drugs with his name and address inside on a tram.

In a Facebook post, officers poked fun after making the discovery on a Metrolink in Bury, Greater Manchester today.

Police posted a picture of the drugs recovered and issued a mock appeal to ‘reunite the lost property with its owner’. 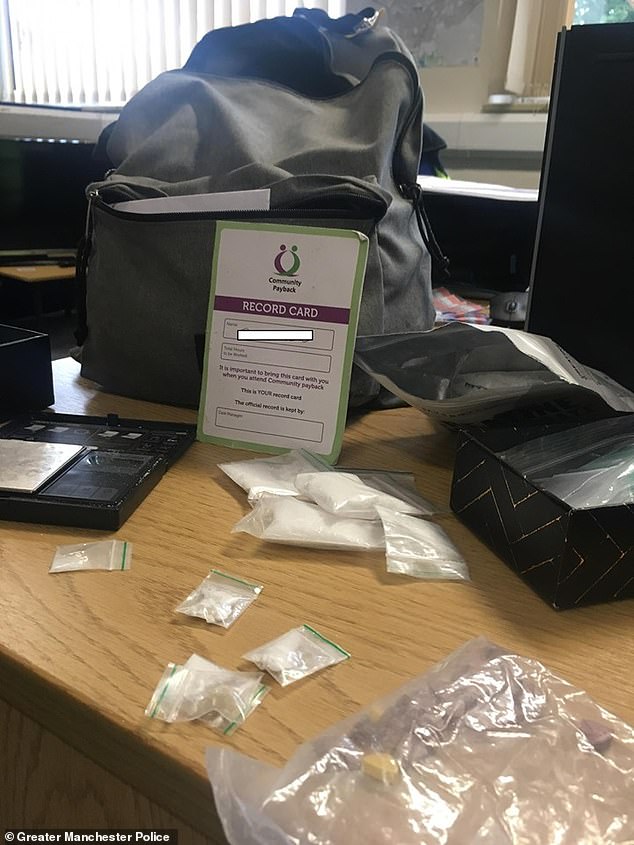 They said inside the grey rucksack were 25 tablets, a large amount of white powder, small snap bags containing white rocks and white powder and scales.

The owner also left a Community Payback card with his name and address inside the bag, police added.

The post, on the Trafford North GMP page, said: ‘Police appeal to reunite lost property with its owner.

‘A poor individual has forgotten his rucksack while travelling on the tram on the Bury line. 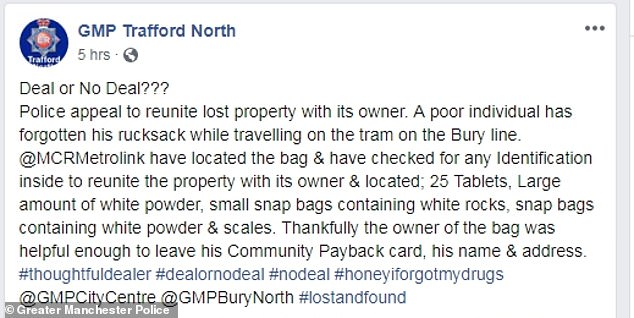 ‘Thankfully the owner of the bag was helpful enough to leave his Community Payback card, his name and address.’

The post sparked much hilarity on social media and has received nearly 2,000 Facebook reactions and a host of comments mocking the bungling dealer.

It comes as police and transport officials are gearing up for a big weekend of public events in Greater Manchester – with Parklife Festival and Noel Gallagher and Muse gigs taking place.

Chief Superintendent Graeme Openshaw, from GMP’s Specialist Operations Branch, who will be overseeing policing at Parklife, urged anyone with a concern to speak to an officer directly.

Chief Supt Openshaw said: ‘Our aim is to ensure the weekend is as safe and enjoyable as possible for everyone who is planning to attend Parklife.

‘We are very experienced in dealing with high profile events like this and festival-goers can expect to see police officers on the ground in and around the event.’