Hong Kong demonstrators to rally at rural town to denounce assault by suspected gangsters, in defiance of police ban. 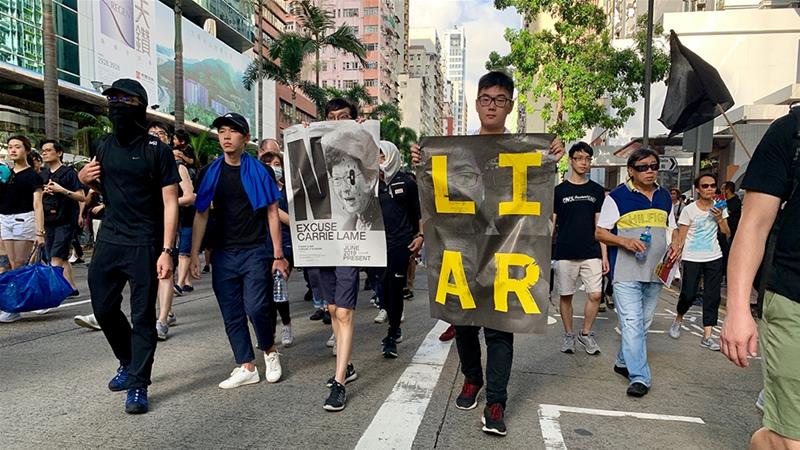 Hong Kong – Thousands of people in Hong Kong are expected to defy a police ban and march in a small rural town where suspected gang members assaulted pro-democracy protesters and passersby last weekend.

The attack in Yuen Long on Sunday night by a mob of white-clad, rod-wielding men left at least 45 people, including members of the media, injured.

The police, which came under heavy criticism for an apparent failure to stop the violence against the protesters, arrested 12 people, including some with links to criminal groups known as the triads.

As the outcry over a now-suspended extradition bill that would allow criminals to be sent to mainland China for trial continues, protests are spreading into deeper pockets of the territory and reaching more remote communities.

Dubbed Take Back Yuen Long, Saturday’s rally is taking aim at “terrorism”, according to Max Chung, who applied to police on Tuesday for permission for the march to take place in the northern town.

But on Thursday, police issued a letter of objection for the rally, citing concerns for public safety and order.

“The march is triggered by the violent incidents last Sunday and protesters have shown hostility towards some Yuen Long residents,” Anthony Tsang Ching-fo, the acting New Territories North regional commander, said on Thursday, according to the South China Morning Post.

“There is a fairly high chance for both sides to clash.”

Despite losing the appeal on Friday, Chung, a 39-year-old native of Yuen Long, vowed to push on with the unlicensed assembly.

“It won’t be stopped. One of the slogans is ‘spreading the blossoms.’ We plant all the flowers and they blossom. So until the government responds to the five requests, especially the independent investigation [into police violence], I don’t see how anything can stop it.”

Since mass demonstrations began in early June, demonstrators’ requests have included the complete withdrawal of the controversial extradition bill, which the city’s embattled leader Carrie Lam has pronounced “dead” but has not officially retracted.

Other core demands include an independent inquiry into alleged police brutality, removing the “riot” label for the June 12 protests, the release of arrested demonstrators and the direct election of officials.

Following Sunday’s attack, which appeared to target black-clad pro-democracy protesters returning home from a demonstration, police came under fire for arriving 39 minutes late to the scene.

Police flatly denied any accusations of collusion with the mobs and claimed they were strapped for manpower as another demonstration unfolded in the city centre 30km away, where protesters surrounded Beijing’s liaison office and defaced the Chinese national emblem.

Tensions have risen dramatically since, with state news agency Xinhua calling the act a “blatant challenge” to the central Chinese government.

Earlier this week, the spokesman for the Chinese defence ministry, when asked how China’s forces would respond to the situation, referred to a law in the territory that states that the Hong Kong government may request the assistance of Chinese troops stationed in the city to maintain public order.

Phil, a 31-year-old protester planning to attend Saturday’s march, described it as “revenge” against the gangsters.

“[Danger] always is a risk, but Hong Kong people need to do that otherwise things will become worse,” he said. “Protesters have two different sides – peaceful and violent. But you can see being peaceful is not going to make the government do anything.”

On Friday, hundreds of protesters occupied the arrival hall of Hong Kong’s International Airport in an effort to spread the message of anti-extradition to travellers.

Police have placed further restrictions on another protest planned for Sunday billed as an anti-police brutality demonstration.