London: Boris Johnson's top health adviser concedes there is a "small but real" worry that expanding the window between the first and second coronavirus vaccine jab could spawn a new mutant strain, as the number of infected Londoners surges to one in every 30 people.

The government needs to vaccinate at least 2 million vulnerable people by mid-February to have a hope of ending a nationwide lockdown caused in part by a highly transmissible new variant which has sent infection rates soaring across Britain. 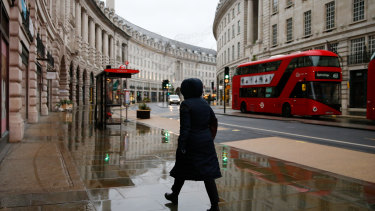 Regent Street in central London after the capital entered its third lockdown since the start of the pandemic. Credit:Bloomberg

BioNTech and Pfizer warned there was "no data" to support the UK's decision to delay the booster shot. But health experts in the UK have supported the decision as a practical response to the growing crisis.

Denmark this week approved a lag of up to six weeks between the first and second shots of the Pfizer-BioNTech vaccine.

"So it's true that as you get to very high levels of vaccination the virus is then struggling to work out what to do and that is eventually going to become an issue and the virus probably will mutate at that point and that will mean different vaccines will be needed in due course," he said.

The UK recorded another 61,000 new infections on Tuesday and there is no evidence that the second wave is slowing like it has in the rest of Europe.

England, Wales, Scotland and Northern Ireland have all imposed national lockdowns to lower transmission but the vaccine rollout will be key to lowering soaring hospitalisation rates.

Johnson on Monday (local time) said the top four priority groups to receive the vaccine – some 14 million people – should have been offered their first jab by mid-February but on Tuesday warned there were "a lot of caveats, a lot of ifs built into that".

Whitty said the timeline was "realistic but not easy".

"The National Health Service is very determined to do this but that does not make it easy."