An out-of-control performing horse fell backwards into a crowd of terrified, screaming diners at a famous restaurant in Bogota, Colombia.

People enjoying their food and a show in restaurant La Margarita were swept into a panic as the horse lost its balance while up on only its hind legs.

It fell down into a fleeing crowd, taking the rider with it.

No one was injured but the footage raised concerns over the restaurant’s treatment of its horses and questioned the ethics of using animals for entertainment.

The original video, posted to TikTok on August 30 by Nathalie Sánchez, shows that the rider initially has control of the horse as it skips rhythmically, its hooves clicking.

Seconds later, it suddenly stumbles and in a frenzy goes up on its hind legs. 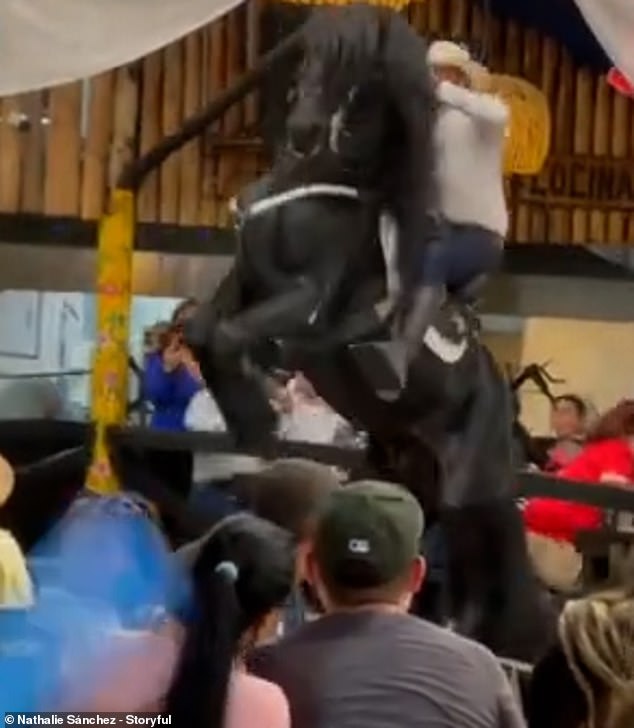 The horse loses control and suddenly stands up on its hind legs mid-show, flailing as it falls down

The horse then loses balance and topples backwards into diners around a table.

The crowd starts screaming and running away from the area as the horse falls, legs flailing.

It eventually gets back up.

The original video has over three thousand views, and has attracted a number of concerns about the health of the horse.

Twitter account Colombia Oscura shared the clip, where comments accuse the the restaurant of subjecting the horse to abuse.

Bibiana C commented: ‘You know how many hours of forced training these poor animals are subjected to. They should ban these kinds of shows.’

‘Look at the size of the spurs with which they kick the horses, then they want the horse not to react,’ Máximo Décimo Meridio added. 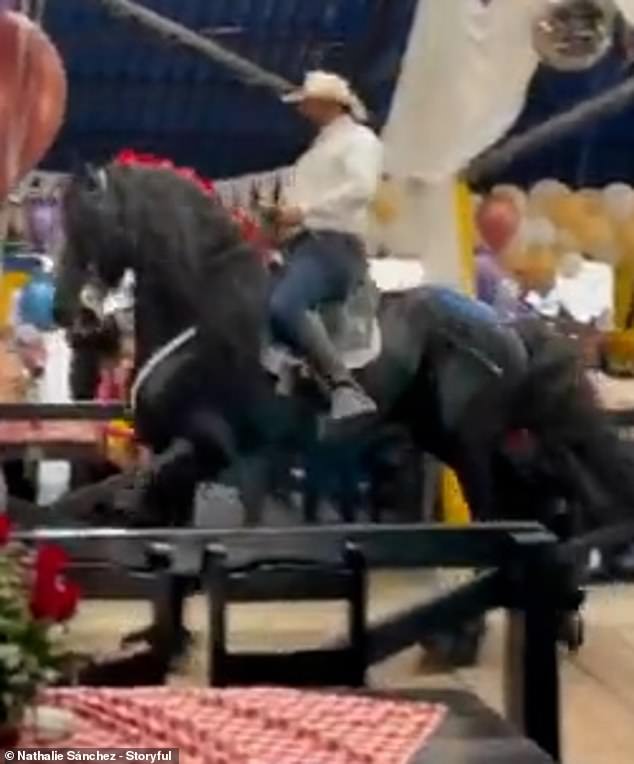 Initially nothing seems amiss as the show goes on with the rider in control of the horse, which skips along to the music

The restaurant issued a statement on its social media to reassure diners that no one was injured.

It also addressed the animal abuse concerns and explained the horse’s behaviour by saying it was shocked by flash from a camera.

The statement said: ‘As thousands of people who have visited us during these years will be able to confirm, the treatment and respect for our animals ALWAYS has been and will be the best.’

It also said La Margarita has 35 years of experience and this is the first time it has had an incident of this type.

It denounced those trying to profit from the footage, adding: ‘There are people who have wanted to take advantage of this incident to ask us for money in exchange for the non-publication of this audiovisual material and also acquire some kind of popularity.’