Earthquakes have hit two different parts of the US in two days, according to the United States Geological Survey (USGS).

On Monday morning, Alaska, suffered a 6.9 magnitude earthquake around 70 miles (114km) east of the small city of Chignik, which has a population of about 100 people.

The US Tsunami Warning System did not issue an alert after the quake and there were no immediate reports of any damage or of any injuries.

The Alaska Earthquake Center said it took place at a depth of 43 miles and is an aftershock of the Chignik quake that hit earlier this year.

The 8.2 magnitude tremor recorded in July triggered a tsunami watch in Hawaii – with a warning that waves may even reach as far as Australia.

Monday’s quake was felt along the Alaska Peninsula and Kodiak Island, according to the state’s earthquake centre.

Four smaller earthquakes were recorded in the area by the USGS, with magnitudes of between 2.7 and 3.3. Typically people report feeling those larger than about 3.0. 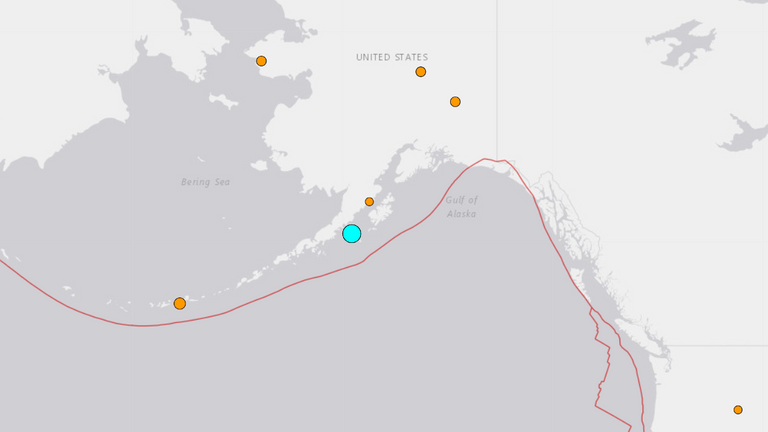 The quake comes after two strong earthquakes struck off the coast of the Big Island in Hawaii on Sunday.

The USGS said the first quake had a magnitude of 6.1 and struck about 17 miles (27 km) south of Naalehu.

The agency added that a 6.2 magnitude earthquake struck about 20 minutes later in the same area.

No injuries or fatalities have been recorded, and no tsunami warning was issued.

Subscribe to ClimateCast on Spotify, Apple Podcasts, or Spreaker.

The Hawaii Department of Transportation said there was no damage from the earthquake at airport runways, commercial harbours or highway bridges.

The USGS said strong shaking has been reported across the island and “very slight damage to buildings or structures may have occurred”.

It added: “The depth, location, and recorded seismic waves of the earthquake suggest a source due to bending of the oceanic plate from the weight of the Hawaiian island chain, a common source for earthquakes in this area.”

Dozens of homes were burned and dangerous fumes caused authorities to issue warnings to residents to stay away from the area.

As well Alaska and Hawaii, the USGS also recorded a 4.9 magnitude earthquake had struck Indonesia on Monday and Chile was hit by a 4.6 quake.