New footage exposes how elephants are stabbed with metal spikes to make them perform tricks, while tigers and apes are chained to be used as props for tourist snaps at Thai resort

Shocking footage shows the incredible cruelty suffered by elephants and other animals at a tourist resort in Thailand.

The distressing video, obtained by animal rights group PETA, was filmed inside the Samutprakarn Crocodile Farm and Zoo in Thailand – which is visited by thousands of tourists each year.

Elephants were filmed being tied up with extremely tight chains and covered in bleeding wounds from their brutal handlers. 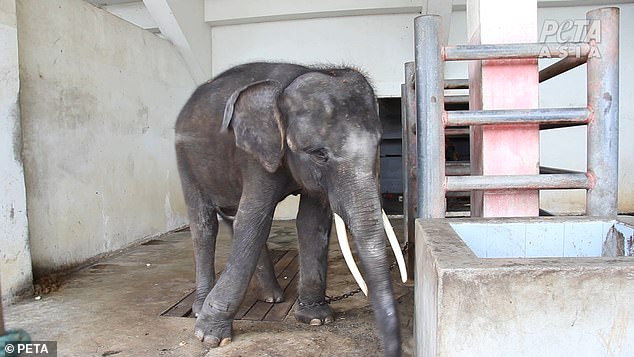 ‘Gluay Hom’, a baby elephant, was seen in the footage continuously swaying back and forth

PETA claims their keepers routinely jab them with sharp metal spikes to force them into giving rides and performing tricks.

They are reportedly made to bowl, paint, and dance in front of holidaymakers for their amusement.

One elephant ‘Gluay Hom’, who was just a baby at the time of filming, was seen in the footage continuously swaying back and forth – a symptom of psychological distress.

Eywitnesses told PETA that other animals such as a tiger, chimpanzee and an orangutan were also used as photo props.

When they weren’t being dragged out for the cameras, they were reportedly held in cramped cages – being deprived of mental stimulation and social interaction.

‘The animals at this Thai zoo see nothing but concrete, chains, and cages,’ said PETA Asia Vice President of International Campaigns Jason Baker.

‘PETA is calling on travellers around the world to stay away from any facility that sentences wild animals to a miserable life of violence and deprivation.’

The Thai elephant industry is notorious for the phajaan ritual, in which still-nursing baby elephants are dragged away from their mothers, immobilised, beaten mercilessly, and gouged with nails for days at a time.

This treatment breaks their spirit, after which they spend the rest of their lives in captivity at facilities like Samutprakarn. 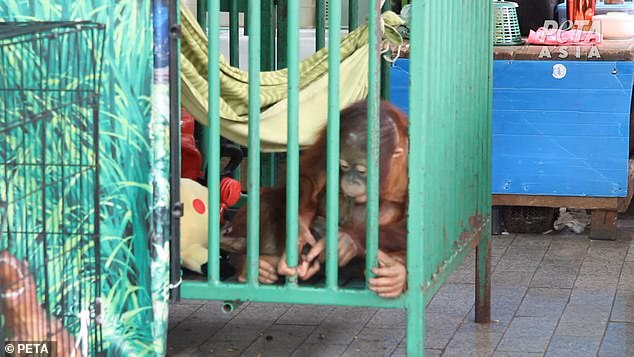 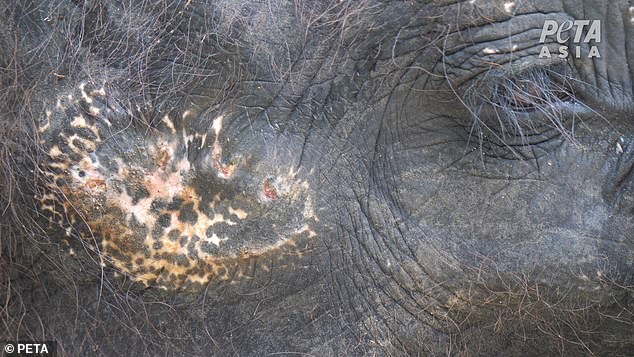 An elephant pictured with a sore looking wound on the side of its head. The animals are allegedly being deprived of mental stimulation and social interaction