Scientists on Wednesday reported another reason the world should sharply rein in global warming: doing so would likely cut in half the current projected amount of sea level rise from the melting of ice this century.

In a study that averaged results of hundreds of computer simulations from research teams around the world, the scientists said that limiting warming to 1.5 degrees Celsius could reduce sea level rise from melting glaciers and the vast Greenland and Antarctic ice sheets from about 10 inches to about five by 2100.

That level of warming, equivalent to 2.7 degrees Fahrenheit, is the stricter of two targets set by the 2015 Paris agreement to combat climate change.

But the world has already warmed about 1.1 degrees Celsius since 1900, and is not on course to meet the 1.5 degree target, or even the higher Paris goal of 2 degrees Celsius.

In a second study published in the same journal, Nature, a separate group of scientists looking only at Antarctica found that overshooting those targets and reaching 3 degrees Celsius of warming — which the world is roughly on track to do, given current pledges to cut emissions — could trigger an abrupt increase in the rate of melting around 2060, and drive a rate at the end of the century that would be 10 times faster than today.

Together, the two studies are the latest best forecasts related to one of the most concerning impacts of climate change: rising oceans that will cause more flooding, force costly overhauls to coastal infrastructure and potentially create millions of climate refugees.

The studies are also the latest to starkly illustrate both the benefits to be gained from reducing warming by drastically cutting emissions of carbon dioxide and other heat-trapping gases, and the perils of failing to do so.

“You can conclude from both studies that mitigation and emissions reductions will be important with regard to how much sea level rises,” said Peter U. Clark, a geologist at Oregon State University who researches sea level but was not involved in either study.

Melting of ice currently accounts for about half of sea-level rise; almost all of the remainder is a result of expansion of ocean water as it warms. A special report published in 2019 by the United Nations Intergovernmental Panel on Climate Change found that total sea-level rise by 2100 could range from about one foot to more than three feet, depending on how much the world warms.

Modeling how land ice will behave as the temperatures rise is difficult, especially for the vast, thick Greenland and Antarctic ice sheets. These studies show that the models are improving, Dr. Clark said, although uncertainties remain. 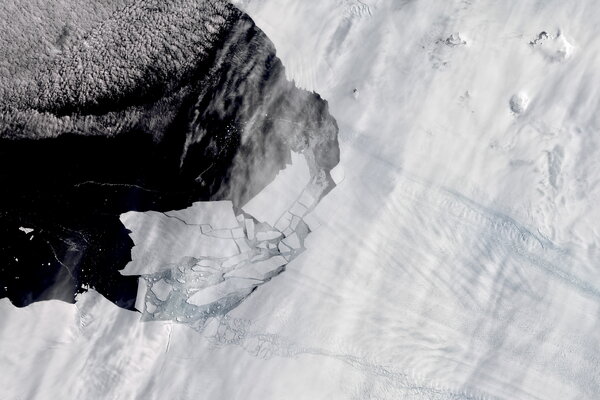 Those uncertainties are especially large when it comes to Antarctica, which if it melted completely over many centuries would raise the oceans by several hundred feet. While the first research team, led by Tamsin Edwards, a climate scientist at King’s College, London, found the potential ice contribution to sea level rise could be cut in half, the researchers also looked at a smaller group of the simulations, those in which Antarctica was more sensitive to warming.

Analyzing those more pessimistic results — but the kind that might be useful to policymakers and others who have to plan for protecting costly ports, power plants or other infrastructure — the researchers found that even if the world succeeded in meeting the stricter Paris goal, the contribution of Antarctic ice to sea level rise could be much higher.

Dr. Edwards said that rather than cutting the total ice contribution to sea level rise from 10 inches to five by 2100, the more pessimistic findings suggested the contribution could be 16 inches. And even if warming were limited to 1.5 degrees, she said, there was a 5 percent chance that melting ice would add nearly two feet to the oceans.

Over all, the range in findings from the first study — which are likely to be incorporated in the next climate assessment report from the Intergovernmental Panel on Climate Change, expected next year — are similar to previous reports. That, Dr. Edwards said, is an indication that the uncertainties are narrowing as the models improve.

“It’s not that it’s giving brand-new numbers that are wildly higher or wildly lower for sea level rise,” she said of the work. “It’s much more about being able to unpack what is our uncertainty and where is it coming from.”

The second, Antarctica-focused study was the work of a team led by Robert M. DeConto of the University of Massachusetts and David Pollard of Pennsylvania State University. The two led a 2016 study that sparked intense debate within the community of experts who study ice and sea level, because it included another mechanism by which Antarctica could bring about relatively rapid sea level rise.

Under that mechanism, called marine ice cliff instability, warmer temperatures over Antarctica would lead to more surface melting of the ice. The water produced would increase fracturing in the ice and could eventually lead to rapid disintegration of thick ice shelves as icebergs broke off into the water. That would accelerate the flow of interior ice to the ocean.

Most sea level experts still do not include the mechanism in their models. In the study led by Dr. Edwards, no models used it.

Dr. DeConto said his new study builds on the earlier work. “It represents all the improvements we’ve made in trying to build computer models of these complex systems,” he said. As for ice cliff instability, “We still think that is a process that needs to be reckoned with,” he added.

If warming is limited to 2 degrees Celsius, Dr. DeConto said, the ice sheet could continue to behave the way it does now.

“When we jump to a world that reaches 3 degrees by 2100, things really start to change,” he said.

A major difference between this work and the 2016 study is when those changes occur. The new study finds they will start later, around 2060 or 2070, when surface melting in Antarctica increases to the point where the ice cliff instability kicks in.

And as with all forecasts of the impact of melting ice on sea level rise, the melting will continue long after the century ends. Under conditions where greenhouse gas emissions continue at high levels, “things really begin to take off in the next century,” Dr. DeConto said.

Daniel M. Gilford, who as a postdoctoral researcher at Rutgers University contributed to the study, said that once Antarctic ice shelves become unstable the process would essentially be irreversible. Even if drastic steps were taken — efforts to remove carbon dioxide from the atmosphere, for example — warming would remain at a level where not enough new ice could accumulate to replace what is lost.

That reinforces the idea that urgent action to cut emissions is needed now.

“There isn’t any ‘get out of melting free’ card,” said Dr. Gilford, who now works for the research organization Climate Central. “You are going to have to reduce greenhouse gases now and in the near term if we want to avoid these long term impacts.”