This coming Sunday evening, the Dallas Cowboys will open their NFL season against the Los Angeles Rams. The two teams will play for 60 minutes of game time, presumably scoring touchdowns and/or field goals. Rams quarterback Jared Goff will try to justify his monster contract, while Dallas quarterback Dak Prescott will try to play his way into one. There will be passes and runs, there will be tackles, and barring a tie, someone will win and someone will lose.

I lay out all these rather obvious facts to remind you that this weekend’s NFL games will not be three straight hours of protesting. No flags will be burned at midfield. No players will carry signs as they run their routes.

There will be protests, one way or another. And, as the NBA showed us a couple weeks back, there’s no guarantee that the games themselves will take place — though it’s almost certain they will. But when the games do in fact kick off, you will be able to watch NFL football … that is, if that’s what you really want to do.

Monday night, Eric Trump, son of the president, took to Twitter to respond to a Friday report that the Dallas Cowboys had gotten the “green light” from team ownership to protest, according to defensive lineman Tyrone Crawford. The green light, Crawford said, gives the Cowboys room “to feel however we’re feeling, express how we’re feeling and say whatever we need to say. Also just trying to find something that’s going to make a boom, is not just going to be something people look at one time and kind of just swipe by like, ‘Oh, that’s great, the Cowboys did that,’ then swipe by.”

Granted, Twitter bears very little resemblance to real life. On Twitter, outrage is both the cover charge you pay and the parting gift you take with you. That said, Eric Trump has four million followers, and if each one of those carries a tincture of outrage out into the world … well, you can see where that leads.

Along the same lines, it’s important to note: Eric Trump has been on Twitter since May 2009. In those 11-plus years, he’s tweeted about the NFL exactly twice before Sunday, both times simply linking to 2017 articles about kneeling. He’s tweeted about “football” only two other times, neither as an apparent fan.

This is not to pick on Eric Trump. He may well be a rabid Giants or Patriots or Cowboys fan. He may have deleted thousands of NFL-related tweets. He may even — here’s a wild thought — have a life outside of Twitter that he doesn’t feel compelled to share on social media.

But what he has tweeted here, days before the NFL season kicks off — and he’s by no means alone in this — is nothing more than an attempt to stoke outrage for its own sake. It’s the rhetorical equivalent of throwing a firecracker into a toilet to see what happens next, and it’s the preferred method of communication for, well, pretty much everyone airing an opinion right now. (Yes, that includes the media, and yes, that includes this article. I’m aware of the irony.)

You’re going to see this a lot over the next few days, as the NFL begins taking its first official faunlike steps toward political activism. Critics will rush to decry the league as “woke,” proclaiming that ratings will surely drop as waves of true Americans turn away from the league. The blowback will follow, as the other side of the aisle weighs in with its own cherrypicked version of the scene. Facts will be dismissed, feelings indulged. Outrage will build upon itself. 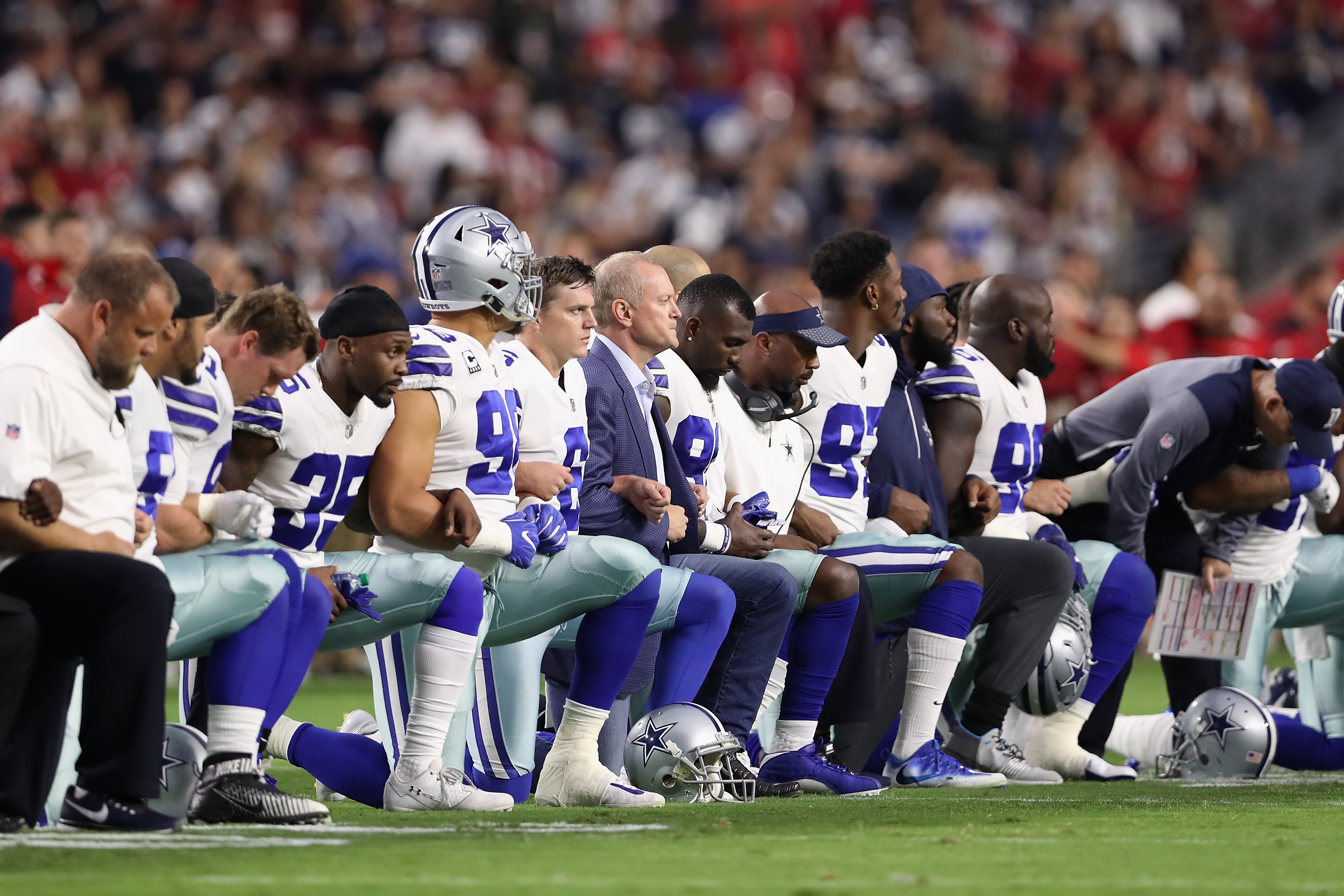 Outrage is cheap heat. Outrage burns hot and fast, doing zero good for anyone and generally scorching the one who’s outraged most of all. You’d think by now we’d have much more worthy things to get outraged over than personal expressions at a football game — and personal opinions about those personal expressions — but if we’ve learned nothing else about America in 2020, we’ve learned that we have an infinite capacity to ignore the fires raging all around us while we fixate on a pebble in our shoe.

Sports protests put a whole lot of Americans at odds with their conditioning. It’s a normal human impulse to assume that everything that comes along after you first became self-aware is, by definition, a downgrade. If you grew up in the ‘60s, music went downhill after the Beatles and Stones. If you grew up in the ‘80s, Michael Jordan is the GOAT no matter whether LeBron wins rings for every single franchise. And if you grew up in a time where politics generally lurked below the surface of sports, you might be wondering why they can’t just play the games and protest on their own time.

There’s a perfectly reasonable defense to be made for those many, many people who want to watch sports without thinking about the chaotic concerns of life. That’s fine! There’s nothing wrong with that! Matter of fact, I’m pretty sure that virtually every single American would love to watch a ballgame without feeling pangs of guilt or frustration or despondency or, yes, outrage. We all could use a real escape right now.

But that’s not how life, or sports, are working in 2020. Being hyperconnected means we’re all starting to see that the lines that so many people thought stood between, say, politics and sports never really existed at all.

If you’ve stood for the national anthem at a game, if you’ve cheered for non-White athletes, if you’ve teared up at a military family reunion, if you’ve thrilled to a fighter jet flyover, if you’ve attended a game at a stadium financed with taxpayer dollars, guess what: you’re already neck-deep in the messy intersection of politics and sports. Protests are just a new branch of the same river that’s flowed through sports forever.

As the protests unfold this weekend and going forward, every fan’s going to face a choice.

Some will see the protests and feel sympathy.

Some will simply not watch.

Some won’t watch, and will loudly proclaim that they aren’t watching.

Some will let the protest messages wash right over them like so many car and beer commercials — “swipe by,” in Crawford’s words.

Some will wonder what the next, more tangible steps for change are, beyond just taking a knee.

Some might even ask themselves why it is that the protests upset them more than the events that caused the protests.

And, yes, some will use the protests as an easy way to fire up their supporters and score political points.

Like the Patriots reloading and winning, like the Cowboys talking big and falling short, the protests are a certainty of this NFL season. We know this, and so we’ve really only got three options: focus on the protests, focus on outrage, or focus on the games. Your choice.

Enjoy Week 1, everyone. It’ll be a memorable one, one way or another.