A couple who quit their jobs in Essex to move to a remote, zero carbon farm in Wales claim the only bill they have left to pay is council tax.

When Charis and Matthew Watkinson gave up their jobs as vets in Essex seven years ago they wanted to start afresh.

So they moved to Pembrokeshire in south Wales where they converted an old horse box to live in, which has now evolved to an entire eco-friendly farm.

From a man-powered washing machine to a gas cooker that functions on horse manure, the couple and their two children have made everything at Beeview Farm self-sufficient.

The only electrical items they own is a TV, mobile phones and a small fridge-freezer, but claims everything else pays for itself. 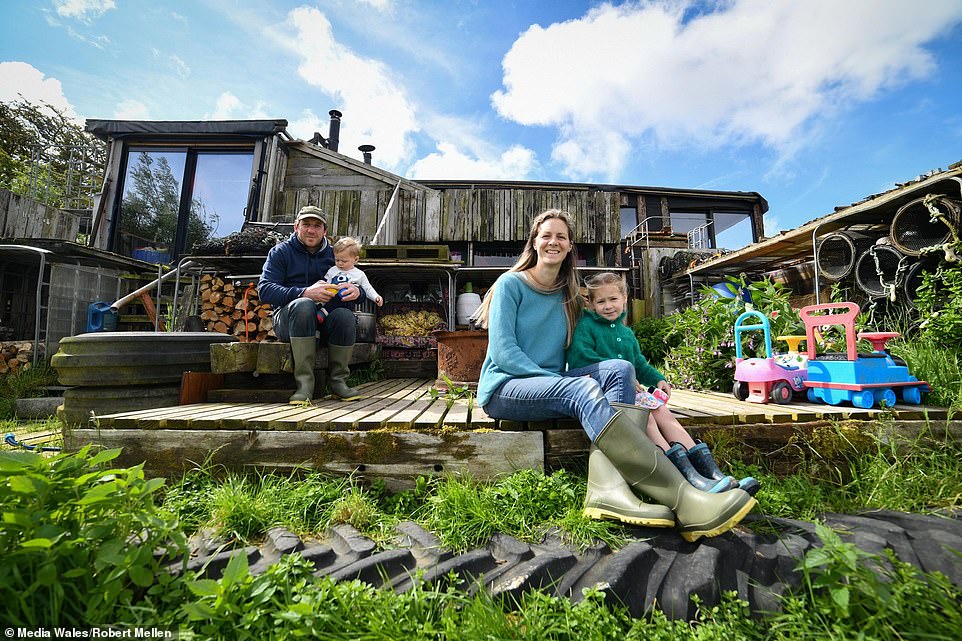 Charis and Matthew Watkinson, pictured with their children Elsa, five and Billy, 18 months, gave up their jobs as vets in Essex seven years ago and moved to Pembrokeshire, south Wales, where they built Beehive Farm 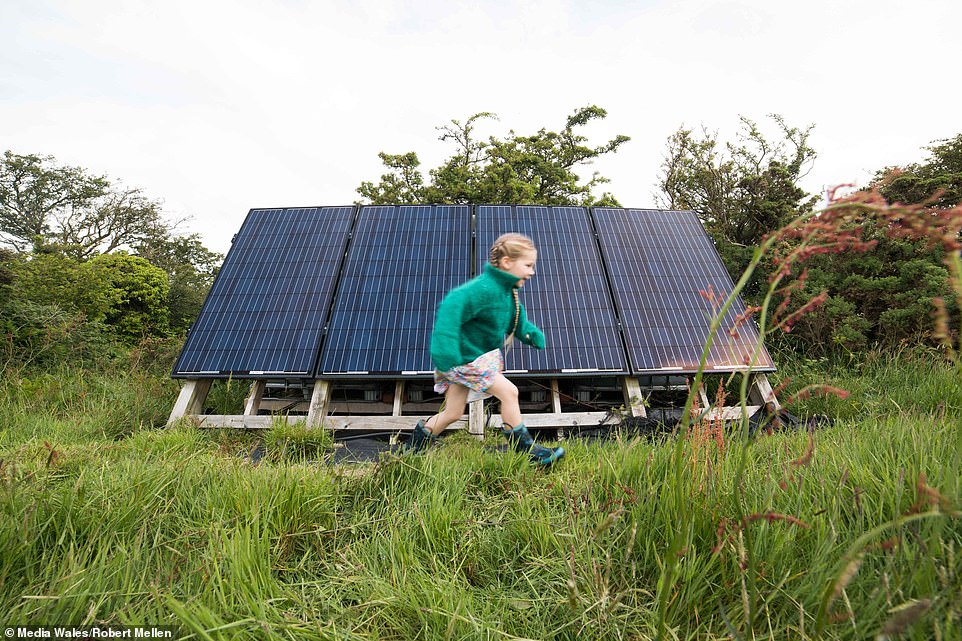 Little Elsa is pictured with some solar panels that help power the Watkinsons’ zero-carbon, eco-friendly home 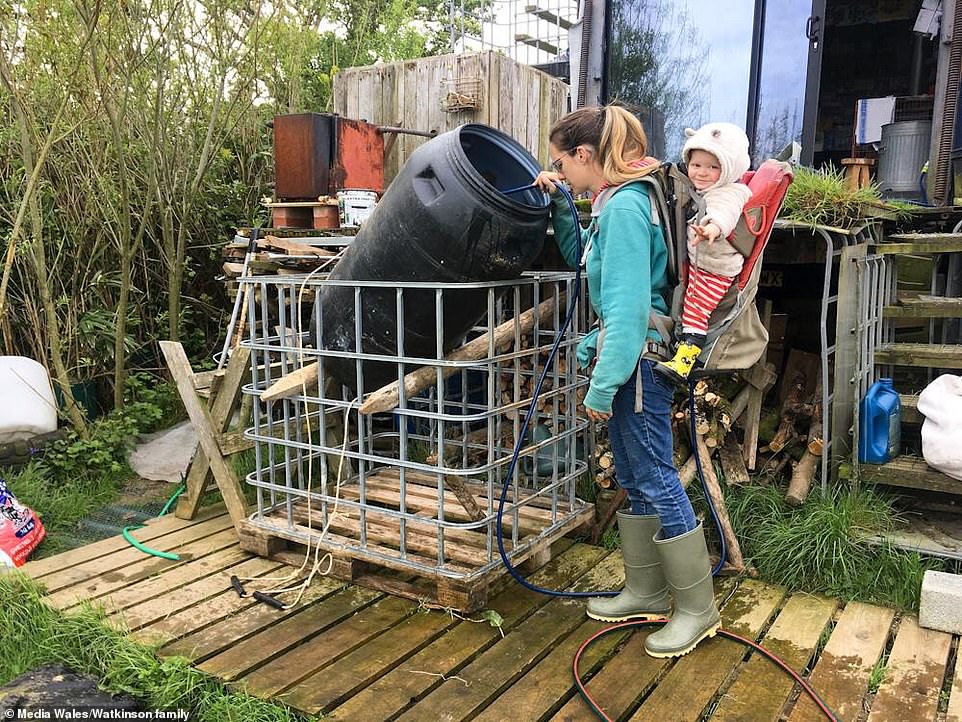 From a man-powered washing machine to a gas cooker that functions on horse manure, the couple and their two children have made everything at Beeview Farm self-sufficient

Mrs Watkinson, 34, said: ‘We were in Essex when the London riots were going on and they got within a mile of us on the last night.

‘Then there was the Occupy London which was all about relying on consumerism and that affected us as we did rely on shops.

‘We just figured we wanted to be able to look after ourselves and be a bit more self sufficient.’

Nowadays, the couple, who have two children, Elsa, five and Billy, 18 months, live a very different life to the nine to five grind they once had.

They use an old car as a makeshift greenhouse, while nearby vegetable gardens are walled in by recycled tyres.

There is also Biff the biodigester, which Mr Watkinson is particularly proud of and hopes will one day be able to fuel all of their cooking with food and animal waste.

They have been able to live out their green dream thanks to the Welsh Government’s One Planet Development Policy.

The scheme allows families to build houses on green-belt land as long as they operate on zero carbon. 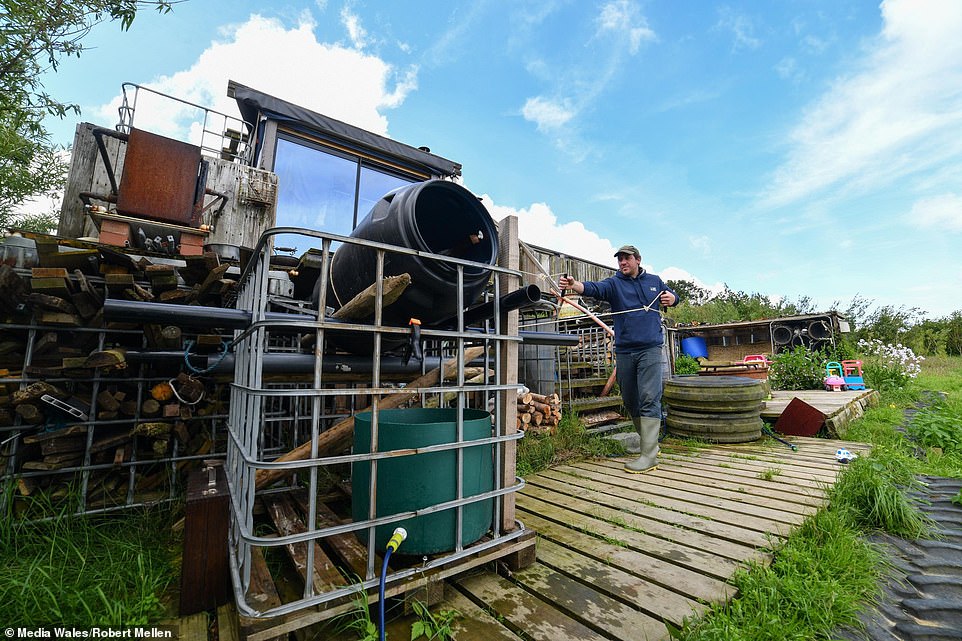 Mr Watkinson is pictured tending to one of his green contraptions, which mean the family only have to pay council tax 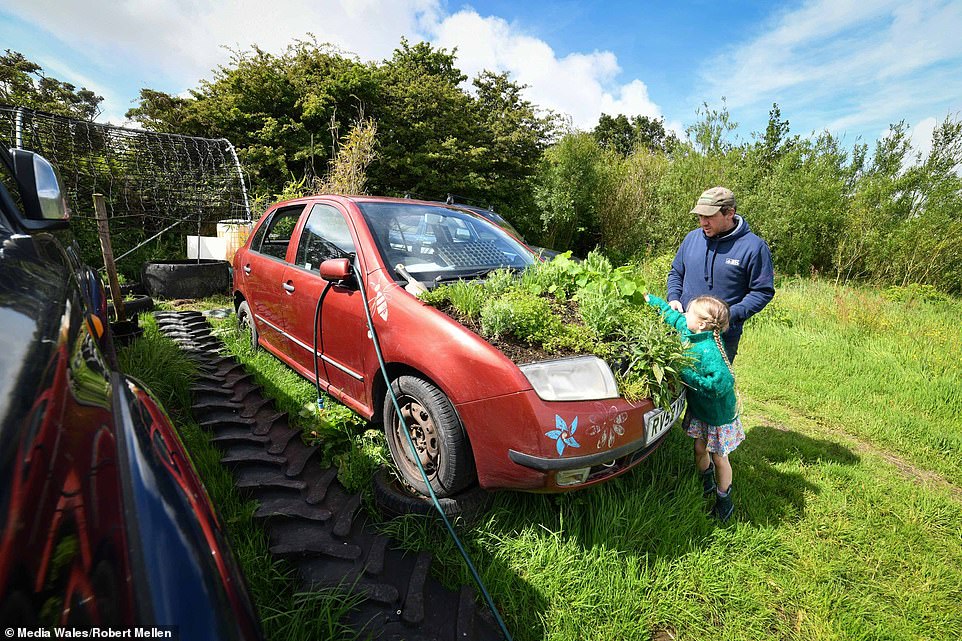 They use an old car as a makeshift greenhouse, while nearby vegetable gardens are walled in by recycled tyres

Mrs Watkinson added: ‘Neither of us are from Wales but we knew about Newport as we had been camping here and loved the area.

‘I think by the time we handed in our notices I knew I needed to do it. As we were just locuming after we moved we didn’t have a job lined up so living without a stable plan was a big thing. But we were ready to get going.

‘Otherwise we would have bought [a house] – we almost had it that way with a mortgage and a job but we didn’t want to carry on with the rat race. We almost did it without thinking about it.’

She continued: ‘We got planning permission for a straw bale house but obviously that’s a lot of time, effort and money and a big part of the planning was fitting the self sufficiency and environmental fulfilments.

‘That was more important than building a house so we got a seven and a half tonne horse lorry, stripped it, and used it as a kitchen, dining room and sitting room with a couple of cheap caravans.

‘Then we had our son and the kids started growing up so we have two big flatbed hay trailers which are 26ft long. 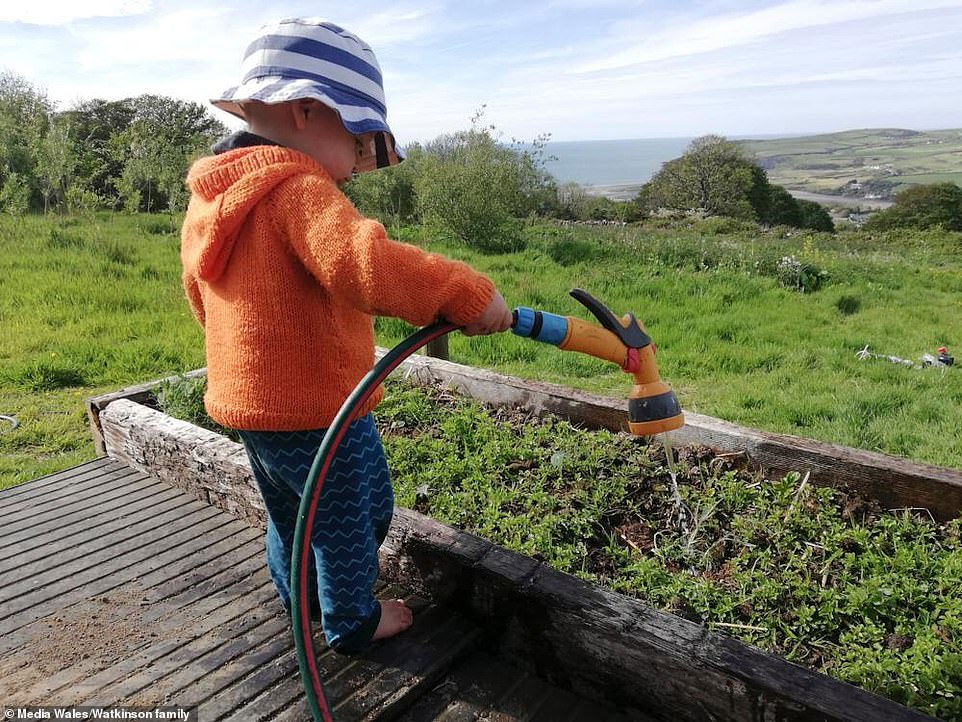 The family grow their own food to eat. Little Billy is pictured watering some greens. It has all been made possible thanks to the Welsh Government’s One Planet Development Policy 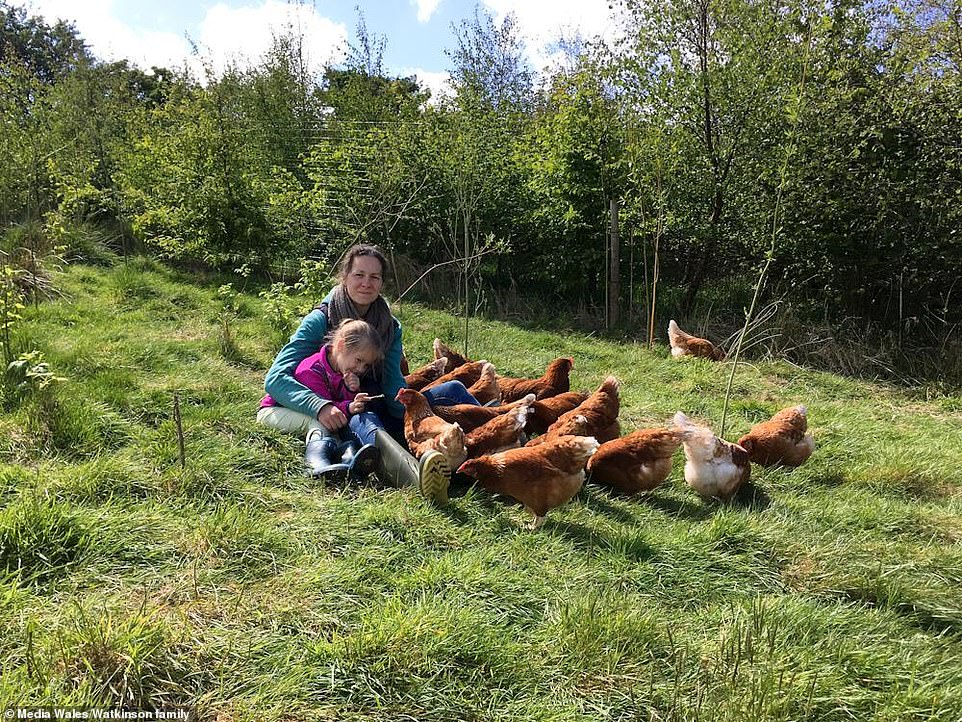 Swapping in her £30,000 vet’s wage, Mrs Watkinson (pictured with daughter Elsa) says the family now make do by selling the eggs from their 50 chickens and six ducks

‘It’s all temporary and they’re on wheels but it means we’ve got a bit more space and we’re warm and dry.

‘We have finished Elsa’s room and we have got a crappy old table in the kitchen so it’s a slow work in progress.’

Swapping in her £30,000 vet’s wage, Mrs Watkinson says the family now make do by selling the eggs from their 50 chickens and six ducks.

The mother-of-two said: ‘We have to make a certain amount of money off a land-based business so our business is selling chicken eggs, duck eggs, and honey from the bees.

‘We let them have all their honey all through the winter and when there’s excess in the spring we will take some, which means we don’t get that much but we want them to be happy.

‘As we are off-grid we only have council tax to pay. We have solar panels for electricity, we have a stream running though the land for water, for cooking at the moment we use bottled gas but Matthew has made a biodigester that makes methane we can cook off.

‘We have to grow at least 30 per cent of our own food, preferable more, and buy 65 per cent from money made from the land. 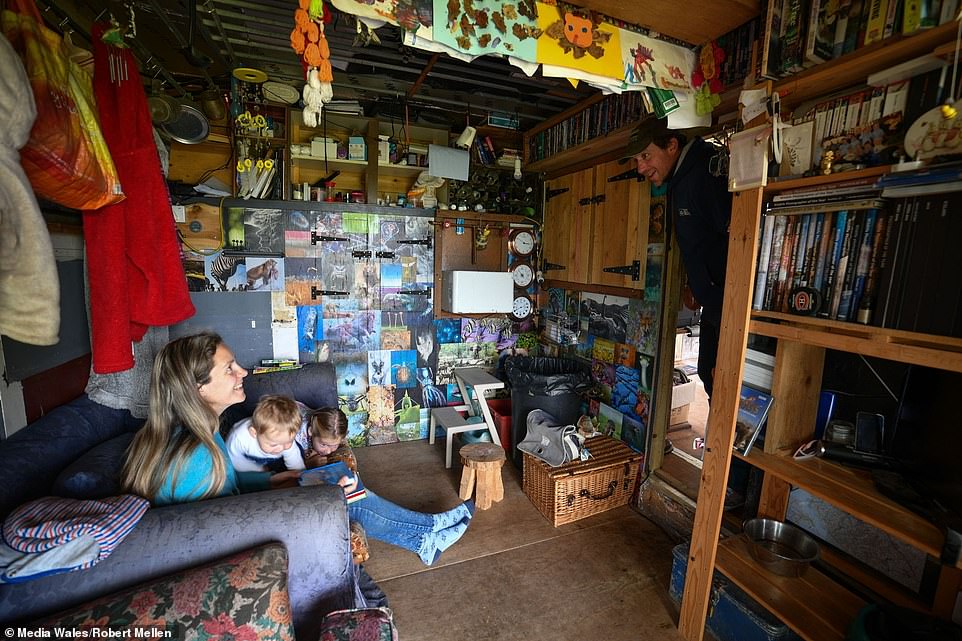 ‘We have a tiny fridge and freezer that people use to go travelling so we even have that.

‘During last winter it was really cloudy and dull so we didn’t have the use of a fridge or freezer for a couple of months which did get a bit close to the wire, but we might put something in to harness wind energy or put a hydro in the stream to make sure we keep ticking over.’

As a young family doing the seemingly impossible, the Watkinsons want to encourage other to live a sustainable, one planet life. But for them, one of the biggest perks is the sense of well-being that comes with it.

Mrs Watkinson said: ‘It’s much nicer, much less stressful – or stressful in a different way. We worry about selling eggs but it’s still a nicer things to worry about. Before I always got migraines and had eczema but since moving to Wales I haven’t had any of that which goes to show it’s made me physically different.

‘It’s just nice to be able to wander around at a slower pace in life. Doing the monitoring reports is difficult and it’s difficult keeping receipts for all the food we buy but noting all the food we pick from the land is really satisfying.

‘[The children] love the chickens wandering around and collecting the eggs and we have three acres for them to run around it. Elsa is really getting into growing.’

For the family however, it was important that living off grid didn’t mean going without the little luxuries of everyday life.

‘There’s no phone line but we found a solution, we get all our Internet from mobile phone deals.

‘It’s terrifying but exciting at the same time, it’s the only way to describe it. We are forging a new path and I know we can do it but I’m just not sure how entirely we do it.’ 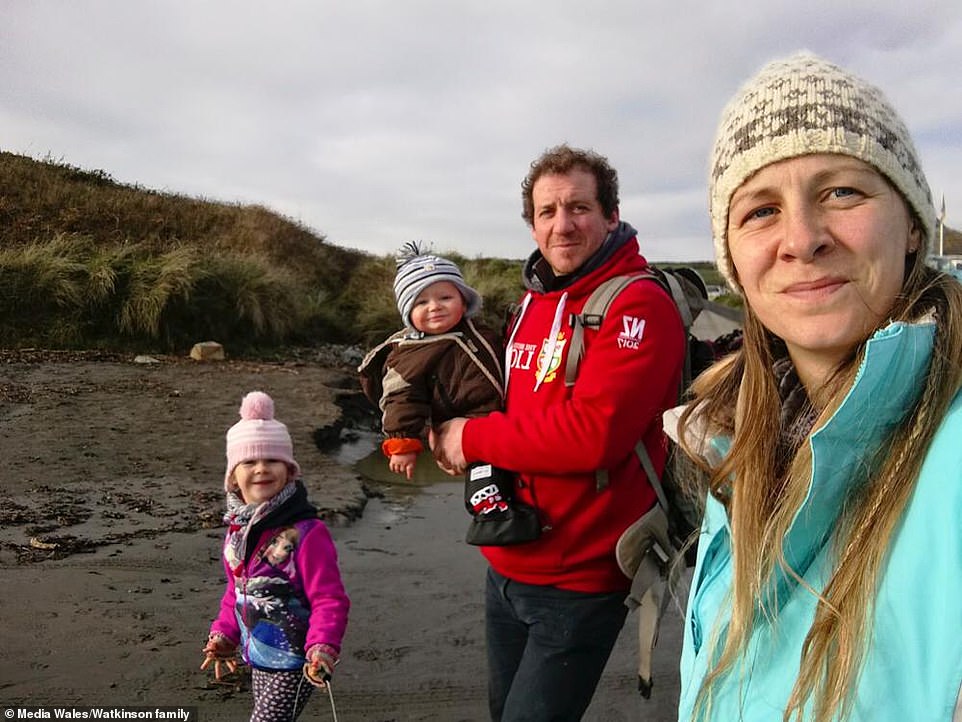 As a young family doing the seemingly impossible, the Watkinsons (pictured on a beach walk near their home) want to encourage other to live a sustainable, one planet life. But for them, one of the biggest perks is the sense of well-being that comes with it

‘I’ve always been messing around with wood – I made a den as a kid, there was Lego, and I was part of the Scouts but didn’t have any special skills.

The most important thing, I think, is imagination, it’s just problem solving. I’ve worried about things for days or weeks – we have an olive barrel which we turned into a washing machine.

‘We only have a little solar energy system so a washing machine is too big, particularly in a Welsh winter. It’s just a rotating barrel with a few strips of wood to agitate the clothes.

‘We found a super natural product to clean the clothes too which means there’s not a problem with the water.

‘The one thing I want to crack is to use a compost heap to heat water. Any extra solar is dumped to heat water so on a good day we can get a lot of hot water.

‘If the weather is bad it would be good to have hot water without having a fire. Compost heaps can get to about 70C so we are building one out of the chicken bedding.’