National eyewear chain Oscar Wylee has been hit with a $3.5 million penalty over a misleading advertising campaign that claimed the company would donate a pair of frames to "someone in need" for every pair sold.

The Australian Competition and Consumer Commission launched Federal Court action against the chain in December last year over marketing claims made between January 2014 and December 2018 about the company's philanthropic work and charitable affiliations. 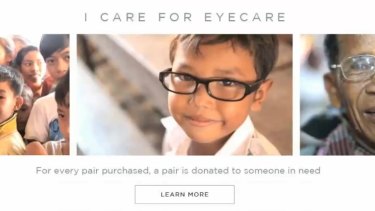 The ACCC took Oscar Wylee to court over its ‘Buy 1 Pair, Give 1 Pair’ campaign.

In 2019, after the ACCC investigation began, the company donated 333,404 frames to charities, foundations, hospitals or prisons, and $80,000 to charitable causes.

In a judgment on Friday, Federal Court Justice Anna Katzmann said the company had made "a deliberate marketing choice".

"By misrepresenting the facts, Oscar Wylee improperly exploited the good nature of consumers to its advantage by contriving to enhance the value of its brand by falsely associating it with altruistic pursuits," Justice Katzmann said.

"It was conduct which could not easily be checked or monitored, either by consumers or the regulator."

The chain's claimed included: "Buying a pair today? As soon as you do, we'll donate a pair to someone in need."

Justice Katzmann said "the true position was that in most instances, the latter pair was not donated within the relevant period".

Oscar Wylee had also claimed to have an ongoing and close affiliation with charitable organisation Rose Charities New Zealand, when it had in fact donated $2000 plus 100 glasses frames in 2014 before ceasing all donations.

Justice Katzmann said Oscar Wylee built its reputation by "appealing to socially-conscious consumers who wanted to support charitable causes through their purchasing behaviour".

"Its conduct was a betrayal of that promise," she said.

Justice Katzmann took into account the fact the company had not previously breached Australian consumer law and cooperated with the ACCC investigation. Its donations in 2019 also went "some way towards mitigating the effect of its contravening conduct".

But Justice Katzmann said she remained "troubled" by the fact the company had not explained or apologised for its behaviour in court. It had, however, established a compliance program and removed the offending statements from all platforms.

Oscar Wylee agreed to make a "modest contribution" of $30,000 to the ACCC's legal costs.

The company has three years to pay the $3.5 million penalty in light of its current financial state and the anticipated impact of the COVID-19 pandemic.

Oscar Wylee said in a statement that it "acknowledges the importance of the issues raised by the ACCC and sincerely regrets" breaching Australian consumer law.

"We have also adopted a strict Trade Practices Compliance Policy, directed to the protection of consumers, and appointed a Compliance Officer responsible for its implementation."