Singapore: At Toa Payoh, a 10-minute ride-share drive from the heart of Singapore, there is a new sheriff in town.

Its name is Xavier and it’s a robot built to patrol the pavement of the busy shopping district within one of the city state’s oldest housing estates.

It’s charged with enforcing COVID-19 protocols such as mask-wearing, while deterring other bad civic habits such as smoking in banned areas and parking bikes in the wrong place. Xavier and its deputy – also called Xavier – have been zooming around the footpaths at Toa Payoh mall since Monday as part of a three-week government trial.

Armed with sensors, a dashboard and 360-degree cameras and with a direct line to a “control and command centre” staffed by real officers, their deployment is part of a multi-agency effort to assist policing with science.

The robots, which send alerts and data to a video analytics system with artificial intelligence capability, are designed to be able to approach the person responsible if they detect something out of order. They then display a message on their screen pointing out the indiscretion.

The other offences the Xaviers are on the lookout for during the trial are illegal street food vending or hawking and the riding of motorised active mobility devices and motorcycles on footpaths.

For shopkeepers at Toa Payoh, the arrival of the robots has been a curiosity as much as anything. Nobody wanted to give their names even though the Xaviers weren’t in sight at the time. But locals reported the pair had not bothered many as they zipped back and forth, and in fact had more cameras on them with locals taking videos of them on their phones. 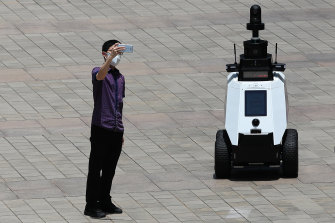 The shoppers took selfies with Xavier as he patrolled the mall. Credit:Getty

If it all seems more than a little Orwellian, though, that’s not a new phenomenon here. Singapore last year set free a robotic dog called Spot to ensure walkers and runners were not getting too close to one another at Bishan-Ang Mo Kio Park, a large green space in the inner north of the island.

Drones have also been trialled as a way of enforcing social distancing measures and Singapore’s Minister for Home Affairs K Shanmugam last month announced plans to more than double the number of police cameras in south-east Asian nation from 90,000 to 200,000 by 2030.

Responding to suggestions that the mass surveillance represented an incursion on privacy, he told parliament “most people want to live in an environment which is safe and secure”.

Singapore can claim to be that, with only Copenhagen and Toronto ahead of it on the Economist Intelligence Unit’s safe cities list last month.

“The deployment of ground robots will help to augment our surveillance and enforcement resources,” said Lily Ling, regional director of the Singapore Food Agency, one of the government departments behind the robot patrols.

“For instance, the surveillance of illegal hawkers can be manpower intensive as officers need to be deployed at various areas across the island. The adoption of robotics technology can be used to enhance such operations, and reduce the need for our officers to do physical patrols.”

Easily identifiable with their job title printed in capital letters across their red polo shirts, the safe distancing ambassadors have been appearing regularly in shopping centres and restaurant and bar precincts, reminding people to congregate only in groups of five and to wear masks, which are mandatory outside the home unless eating or drinking.

There have been several reports of abusive behaviour towards the ambassadors. But in the main, Singaporeans have greeted the virus-related restrictions imposed upon them with characteristic compliance – and it’s not unusual for them to police each other. 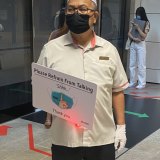 The country relaxed curbs nearly a month ago, prioritising vaccinated people, and as the city state passed an 80 per cent vaccination rate, it has made the first tentative steps towards resuming international travel with quarantine-free flights from Germany for the inoculated only.

However, the government is on edge about a rising number of new local infections – there were 347 on Wednesday as a 93-year-old woman became the 56th person to die of the virus here – and is not ruling out another tightening of protocols.