Typically fans need a subscription in order to watch European games on the channel, but viewers will be able to watch the Madrid showdown between Liverpool and Tottenham Hotspur without paying.

In addition to being available live on BT Sport, fans can watch the game streamed live for free through the BT Sport app or view it online at the broadcaster’s website or YouTube channel. 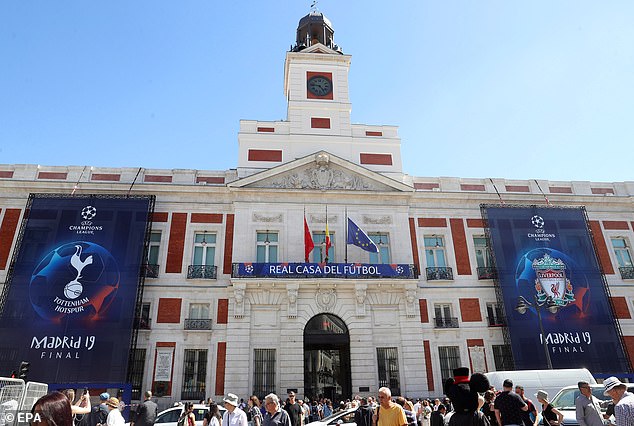 Virgin TV customers will also be able to watch the match for free.

BT agreed to make some of UEFA’s content viewable for free when negotiating a deal – which gives the broadcaster TV rights for the Champions League and Europa League until 2021.

In a statement released on their website, BT announced: ‘BT will be showing the UEFA Champions League final for free.

‘If you’re planning to watch the final on a BT TV or Sky set-top box, you will need to have a BT Sport subscription, while Virgin Media set-top boxes will show the game for free.

‘Watch on all on mobiles, tablets, and selected smart TVs and games consoles via the BT Sport app, as well as online via BTSport.com or YouTube.’

The announcement comes as the City of London  Police Intellectual Property Crime Unit (PIPCU) warned fans against illegally streaming ahead of the UEFA Champions League final.

The organisation said illegal streaming is most popular around large sporting events, adding that using a device to stream TV, sports or films without an official subscription is breaking the law.

Officers warned would-be illegal streamers that in 2017 Yusuf Mohammed, of Bristol, was ordered to pay legal costs of over £16,000 for re-streaming Sky Sports content online illegally.

A spokesperson for the PIPCU said: ‘Consumers need to be aware that streaming without the right permissions or subscriptions is no longer a grey area. 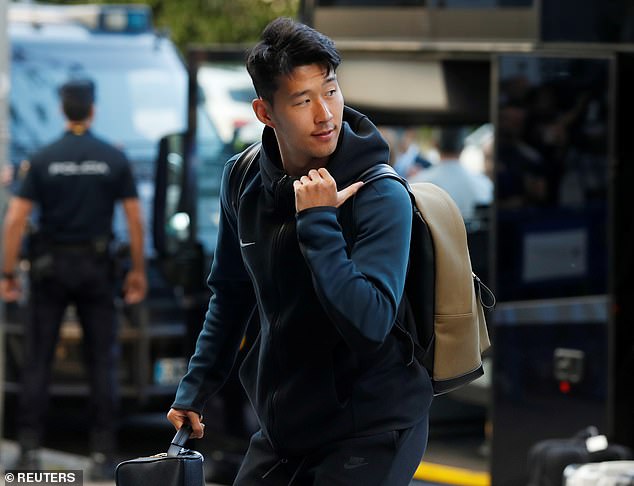 BT agreed to make some of UEFA’s content viewable for free when negotiating a deal (pictured: Tottenham’s Son Heung-min as he arrives in Madrid on May 29)

‘In April 2017, the EU Court of Justice ruled that not only was selling devices allowing access to copyrighted content illegal, but using one to stream TV, sports or films without an official subscription is also breaking the law.’

They added that misusing TV subscriptions has ‘serious repercussions’, and customers found to be illegally sharing paid-for content can have their subscription account terminated immediately and ‘can expect to be prosecuted and fined’.

How to watch the Champions League final

Saturday’s Champions League final between Liverpool and Spurs will be available to watch on TV, through mobile devices and on computers.

The final will be broadcast for free on Samsung Smart TVs models made after 2015, Apple TV 4K, Chromecast Ultra or Xbox One (X and S), via the BT Sport app.

The same devices will be able to display the finals in HD HDR (High Dynamic Range), but will require a BT Sport subscription along with the BT Sport app.

The match will also be viewable on BTSport.com (at btsport.com/final), or through BT Sport’s YouTube channel.

If you’re planning to watch the final on a BT TV or Sky set-top box, viewers will need to have a BT Sport subscription, but Virgin Media set-top boxes will show the game for free.

BT’s coverage of the final will start at 6pm on Saturday June 1.

In March 2015, the limit on fines imposed by a Magistrates’ court for offering or exposing copyright infringing material was removed – and so the potential fine on summary conviction in relation to an offence committed after this date is unlimited, police warned.

Detective Chief Inspector Teresa Russell, head of the City of London Police’s Intellectual Property Crime Unit said: ‘The UEFA Champions League is just one in a number of high profile sporting events each year, but don’t let your eagerness to tune in make you commit a crime.

‘By illegally streaming the match, you never know when the site is likely to be shut down. It could be at a crucial point in the match!

‘In fact, enforcement agencies and companies will aim to do just that in an attempt to dissuade people from using illegal sites in the future.

‘In addition, some set-top boxes do not go through rigorous electrical testing and are therefore at risk of giving electrical shocks or catching fire.

‘By using legitimate providers these risks can easily be avoided. Watch it live, watch it legally.’