CASES of the coronavirus are "starting to fall" as infection rates "slow" across younger age groups, data from Public Health England (PHE) has revealed.

The weekly national influenza and Covid-19 report has shown the first signs that the second wave of the virus is "flattening". 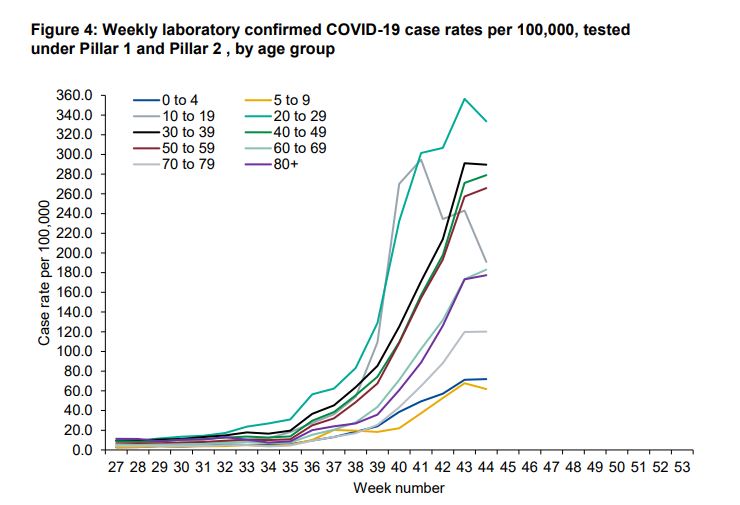 Cases are still rising in the over 40s and data from the Office for National Statistics (ONS) last week revealed that cases were still rising across nearly every region in the country.

Graphs provided by PHE show that cases have declined in younger age groups such as five to nine year olds and 10 to 19 years olds.

While an uptick in cases can be seen in the past few weeks, many of the age groups on the graph can be seen to be levelling off.

Cases have witnesses a drop off since last week – but this could be due to a drop off in testing because of the half term period. 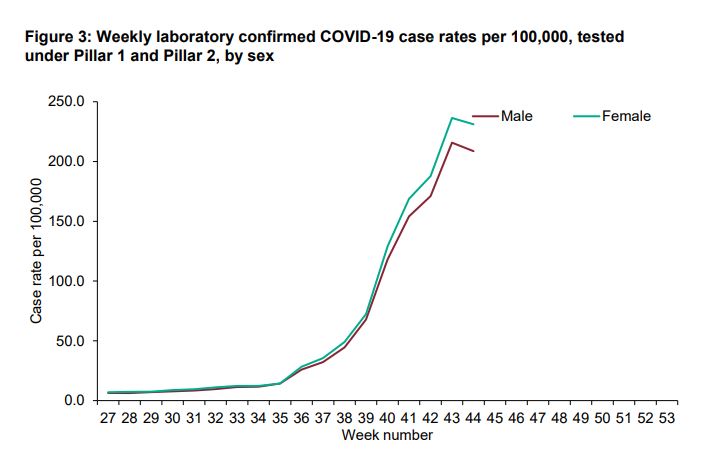 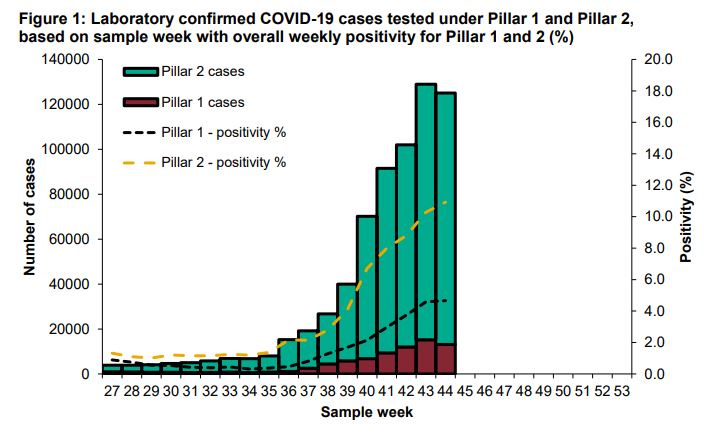 Rates are falling among younger age groups, though the highest rate of any age group continues to be for 20 to 29-year-olds, which stood at 333.6 in the week to November 1, down from 356.4.

As of November 3, the report states that a total of 912,236 people have been confirmed positive for Covid-19 in England.

While there have been drops in some areas, hospital admissions for patients with Covid-19 are still rising.

It stated: "Emergency department attendances for Covid-19 like diagnosis have increased further in week 44 whilst those for acute respiratory infections remained stable.

It is vital we all follow the new measures that are now in place to reduce infections and save lives.

"The number of Covid-19 confirmed deaths increased further. Overall excess all-cause mortality was observed in week 43; by age group in the 75 to 64 year olds and 85+ year olds and subnationally in the North West and Yorkshire and Humber."

The highest rates of hospitalisation were in the over 85s.

The highest prevalence was seen in London and amongst young adults. 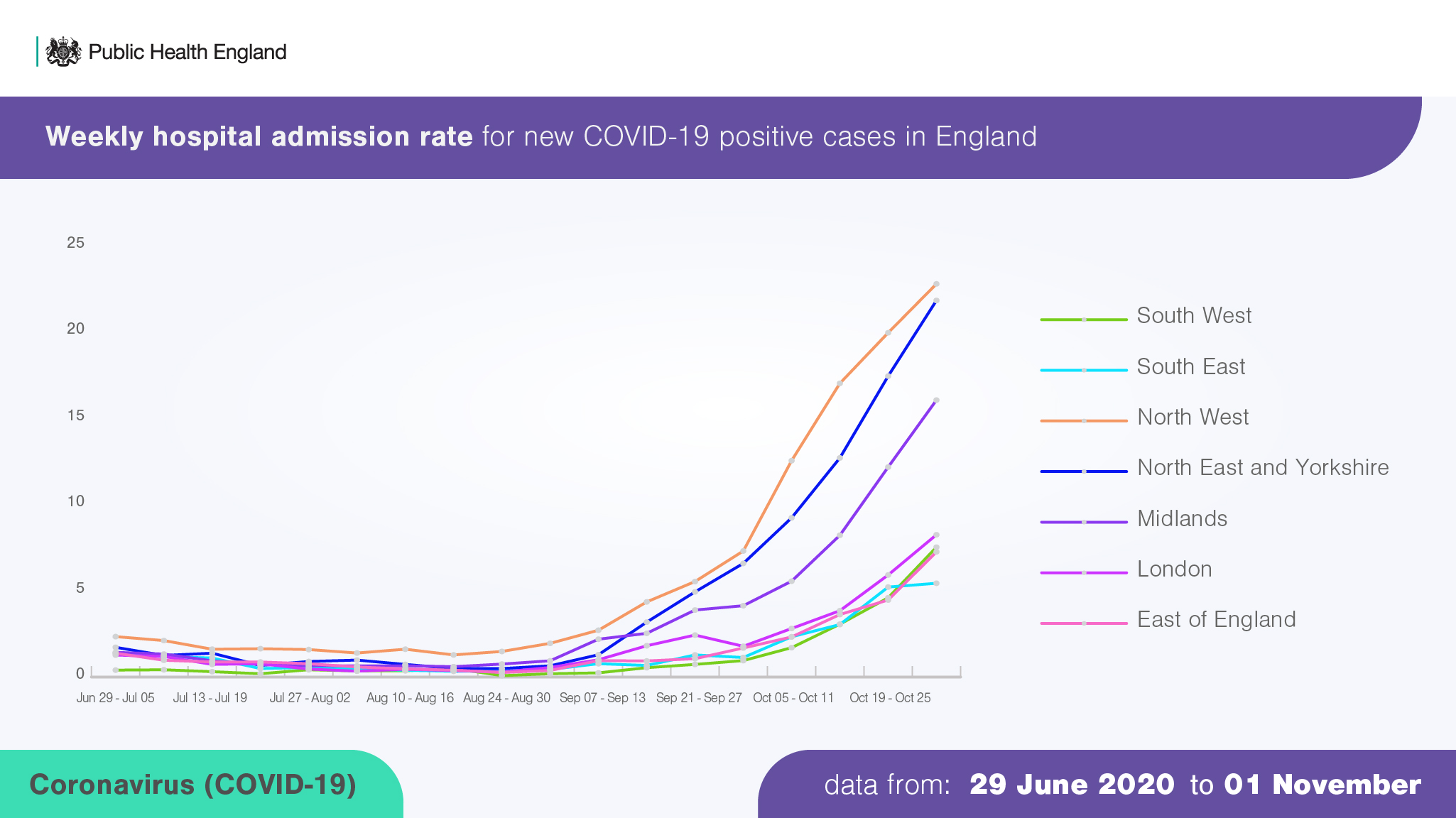 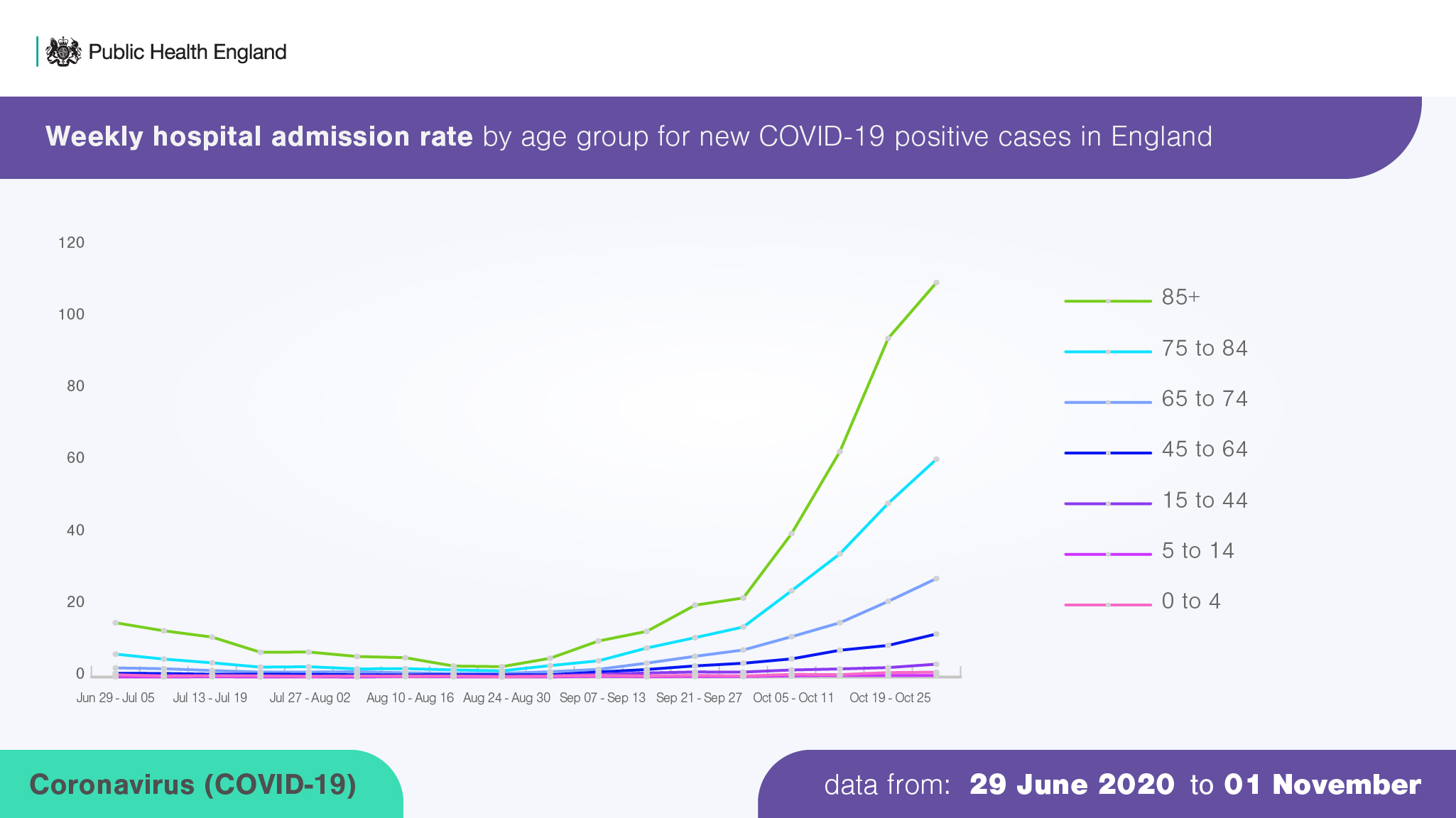 The data from PHE comes after the nation was left in shock after government officials held an emergency press conference on Saturday night.

Heat maps presented to the general public on Saturday evening made for scary viewing as the colour coded charts showed the pandemic was out of control – predicting a worst case scenario of more than 4,000 deaths a day by December.

Chris Whitty and Sir Patrick Vallance presented data, including one graph which showed the death toll predictions from various studies.

But, one of the scientists who worked on that study, said the data was presented incorrectly.

Professor Danlela de Angelis said the curve was made to look like a prediction, when in fact it was a model that was a month old and did not take into consideration the tier restrictions that had previously been introduced.

The data was used to give gravitas to a second national lockdown in England.

The data provided by PHE today gives a glimmer of hope that Tier restrictions were working at reducing cases of the virus.

Earlier this year the government called for people to get their flu jab and ploughed significant investment into the winter roll out.

Yesterday the chief executive office of the NHS, Sir Simon Stevens, said that you are twice as likely to die if you have the coronavirus and the flu at the same time.

The report states that the overall number of acute respiratory infection incidents have decreased from 1,312 in the week commencing October 19 to October 25.

The latest data set covers October 26 to November 1 and has revealed that this now sits at 1,110.

The report states: "It is important to note that an increasing number of outbreaks are being managed through other routes. In the majority of reported incidents SARS-CoV-2 has been detected.

The report also found that through the UK swabbing schemes and patients contacting their GPs with flu or respiratory tract infections, symptoms decreased from 25.3 per cent to 14 per cent.

The PHE report found that uptake for the flu vaccine is at the highest it has ever been for this time of year.

This was seen in the over 65s and in two and three year olds.

The uptake was also seen to have been higher in at-risk groups.

People who have underlying health conditions have been advised on further shielding measures due to the pandemic in order to protect them from catching respiratory illnesses.

The report also stated that the uptake of the jab in pregnant women is higher than last season, and the seasons before.

Dr Yvonne Doyle, Medical Director of Public Health England, said: “Sadly we know that more people will be admitted to hospital in the coming weeks and this will inevitably lead to more Covid related deaths.

“It is vital we all follow the new measures that are now in place to reduce infections and save lives.

"The fewer people you see, the more you’ll help stop the spread of the virus and protect your loved ones.”