Thousands of people have also been left without electricity as storms pound California. 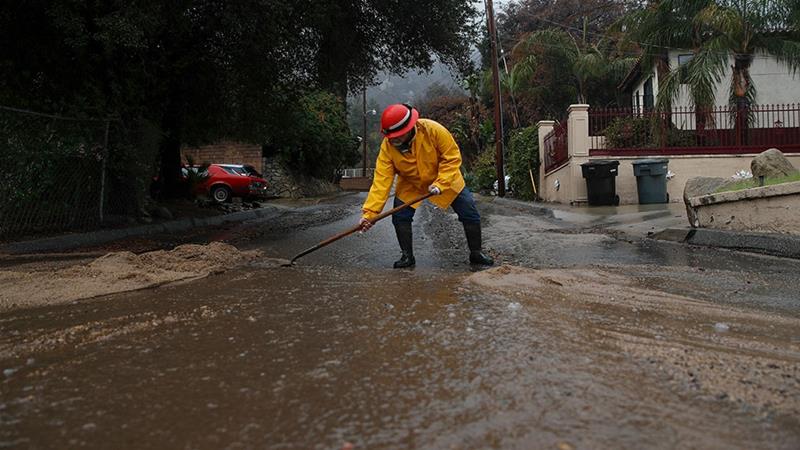 At least five people have died in severe rain and snowstorms that blanketed parts of California with at least five feet of snow in the Sierra Nevada mountains this week, and triggered flooding and mudslides, officials said.

The storms have also left thousands without power and forced wildfire victims threatened by floods to flee their homes.

Forecasters expect the bitter weather to push eastwards into the Rockies and US Midwest through the weekend, while the California Highway Patrol said the rain-slicked highways had led to two fatal accidents that killed four people.

A family of three, including a one-year-old baby, died in El Dorado County on Tuesday, after their car spun across a rain-soaked freeway to hit another car, the San Francisco Chronicle said.

Another man died in a storm-related car wreck on Wednesday in Napa County, highway patrol dispatchers said, but no further details were immediately available.

A 42-year-old man in Oakland was killed after being struck by a tree, uprooted by the wind and rain, that fell on a homeless encampment, media said.

Southern California authorities concerned with rising streams and excessive runoff ordered evacuations in parts of Malibu and other areas scarred by wildfires and trying to recover from a historically bad wildfire season. Malibu schools cancelled classes.

In harder-hit Northern California, authorities warned of imminent floods and debris flows in the wildfire-ravaged city of Paradise and the surrounding region which had been denuded of protective trees and vegetation, telling residents to prepare to flee their homes on a moment’s notice.

Tens of thousands of people were without electricity in Pacific Gas & Electric utility areas, including more than 15,000 in San Jose late on Wednesday night.

“Due to the dynamic nature of debris flow and flash flood events, residents should not wait for an evacuation order to take action.”

High winds could topple more trees as the soil gets wetter and more saturated, the National Weather Service warned.

In Southern California, fog on a mountain highway triggered a 19-vehicle crash. Thirty-five people were evaluated for injuries after the pileup on Interstate 15 in Cajon Pass, but most declined to be taken to hospitals, the San Bernardino County Fire Department said.

Police in Los Angeles and Santa Barbara counties ordered evacuations on Tuesday from areas damaged by last year’s wildfires because of the risk that heavy rain could trigger mud and debris flows on charred hillsides.

The blazes had stripped hillsides of trees and other vegetation that stabilise soil and prevent mudslides, putting at risk thousands of people living in foothill and canyon areas devastated by wildfires.

The hillsides were holding but people in burn areas were urged to remain alert.

The snow and rain were brought by a one-two punch of weather, after one Pacific storm hit California on Monday and a second, larger storm arrived on Wednesday, according to forecasters.

Both are expected to sweep back-to-back through the Rockies and Midwest, gathering more strength from moisture from the Gulf of Mexico, forecasters said, before hitting the Ohio Valley and the Northeast early next week.

The risk of flash flooding and rockslides persist, he said.

“Some areas in the Sierras will get another five inches of rain after the three inches that already fell, with significant snowfall above 6,000 feet [1,828 metres].”

The weather is a boon for farmers and ski slopes, however, as most of California is recovering from years of drought, the United States Drought Monitor said.