French inventor Franky Zapata will try to cross the English Channel on a flying board for a second time after his first attempt failed at the halfway mark.

The 40-year-old’s wife, Christele, said he will retry the 22.4-mile journey on Sunday from the French town of Sangatte, near Calais, to an area near Dover.

Last week, on his first attempt, the former soldier crashed into a refuelling boat 12 miles into the trip. This time, his wife said he will use a larger boat for the refuelling stop in the hope that it will make landing easier. 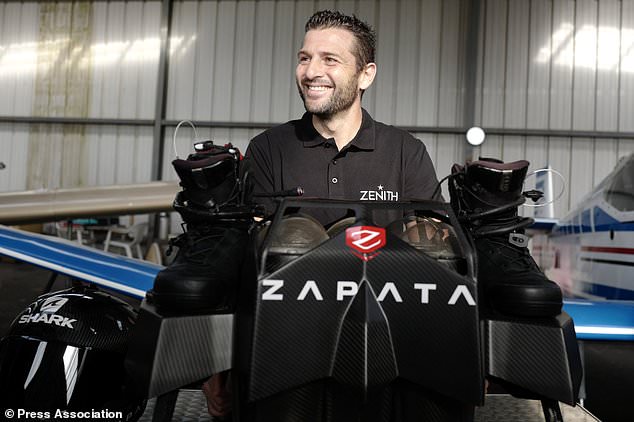 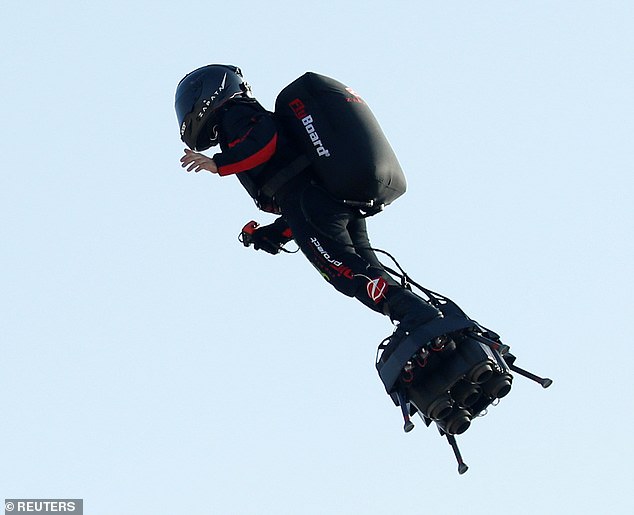 ‘He does not want to end in failure’, his spokesman said.

‘He will try again either Friday, Saturday or Sunday, depending on the weather’.

The inventor has had to build a new board, a customised version of the Flyboard his company sells for water sports.

The engine is fuelled by paraffin he carries in a backpack, with his feet fastened to the board.

After crashing on his first attempt, the former jet-ski champion, from Marseille, had to be fished from the busy shipping lane by rescuers. 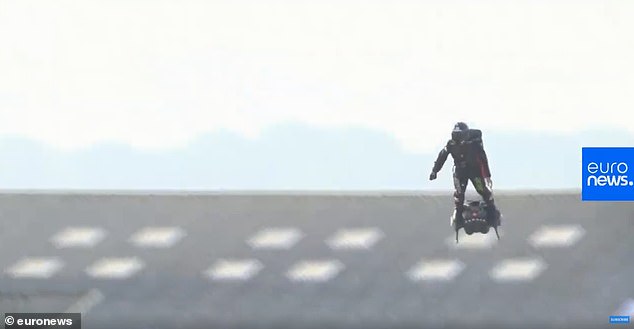 Standing on a platform powered by five small jet engines, Mr Zapata set off at 0706 GMT and reached heights of us to 140 kilometres (87 miles) per hour at an altitude of between 15 to 20 metres during his first attempt to cross the English Channel on a hoverboard

‘It is a huge disappointment. He made his rendez-vous with the refuelling boat but he must have missed the platform by just a few centimeters,’ a member of his team said on BFM television.

‘We practised this manoeuvre dozens of times in heavier seas, with platforms that moved more, without any problems.’

Standing on a platform powered by five small jet engines, Mr Zapata set off on the record-breaking bid to become the first man to cross unassisted on a jet-powered device at 0706 GMT and hoped to reach heights of up to 87 miles per hour at an altitude of between 50 to 65 feet.

He carried about 42 litres of kerosene in his backpack but as that would only take him part of the way across the Channel, he needed to pick up more fuel.

The refuelling was always set to be one of the trickiest parts of the operation. The inventor had hoped to reach the landing platform structure – measuring just one square metre – and stop for two minutes to swap backpacks laden with kerosene before taking flight again. 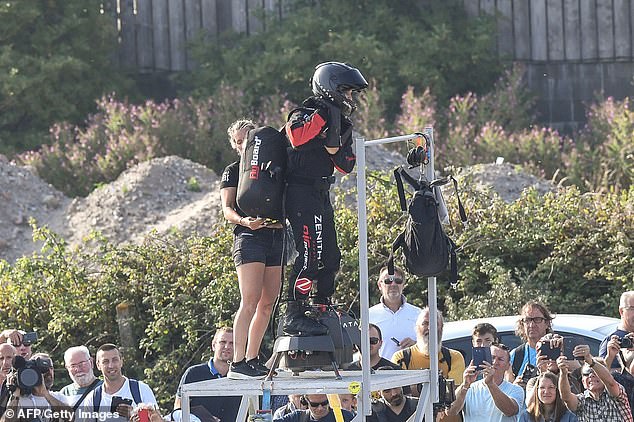 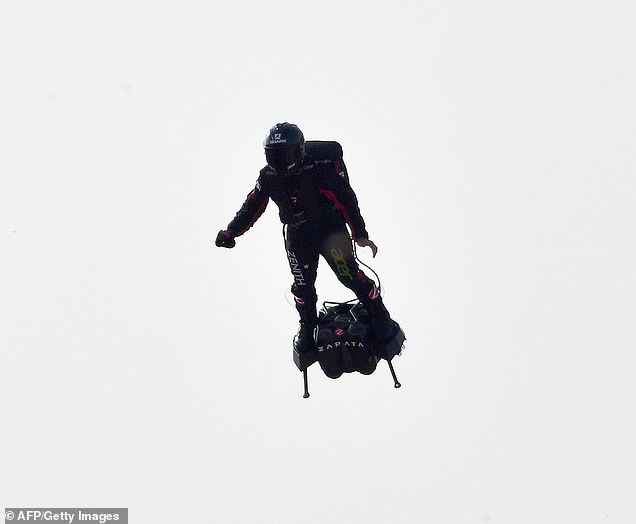 Mr Zappata, who is also known as the ‘Green Goblin’, is marking the 11th anniversary of Louis Bleriot making his first solo flight across the Channel

The inventor told Sky News prior to the flight that he had a ’50 per cent chance of success’ to cross the Channel, but that he had ‘absolute confidence in the technology’.

Mr Zapata, who is also known as the ‘Rocketman’, marked the 11th anniversary of Louis Bleriot making his first solo flight across the Channel.

The state-of-the-art device, which he built from scratch, can propel its driver through thin air at speeds of up to 120mph and reach an altitude of 10,000 feet.

Zapata shot to fame when we wowed crowds on July 14 Bastille Day, flying over a military parade on Paris’ Place de la Concorde.

His hoverboard was inspired by the flying suit worn by the lead character in the superhero movie Iron Man, and is powered by five turbojet engines. He hopes it will one day enter commercial production, as a revolutionary piece of military hardware.

‘We created a new way of flying. We don’t use wings. You are like a bird, it is your body that is flying. It is a boyhood dream,’ he told reporters ahead of the Channel flight.

‘We want to follow a little bit in the footsteps of the pioneers of aviation,’ he added.