Former gangland lawyer turned police informer Nicola Gobbo has been struck off the bar roll, with a Supreme Court judge saying her position as a lawyer is "incapable of rehabilitation".

Though Ms Gobbo has not held a practising certificate since 2014, she has remained on the Supreme Court bar roll despite court proceedings and a royal commission into her formerly secret role as Informer 3838, the police source who gave up her own underworld clients. 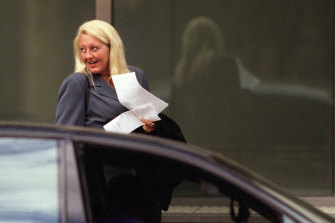 Nicola Gobbo outside the Supreme Court in 2004, at the height of her criminal defence career.Credit:Vince Caligiuri

In a judgment handed down on Wednesday, Justice Jacinta Forbes called the former barrister’s conduct duplicitous and ruled she was not a fit and proper person to remain on the roll.

"The descriptions of the conduct in the agreed facts are fundamental and appalling breaches of her obligations to those clients," Justice Forbes said.

"The conduct demonstrated partiality and so lacked honesty. It lacked a knowledge of what ought to be done and in executing her duties she did so without the ability to maintain loyalty and confidentiality that the fiduciary relationship demanded above all other interest." 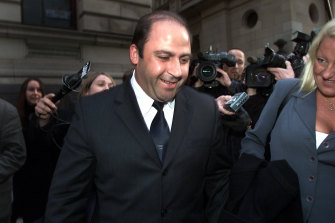 Nicola Gobbo with drug boss Tony Mokbel, who was her client, after he got bail in 2002.Credit:Vince Caligiuri

To remove someone from the roll, a Supreme Court judge must be satisfied they are not a fit and proper person to be a legal practitioner.

Removing a barrister, as Justice Forbes said in her judgment, aims to ensure the public is protected by practitioners, and to protect the standing of the legal profession and confidence in the justice system.

The Legal Services Board, which brought the action before the court, relied on a 2018 High Court judgment that described Ms Gobbo's conduct and Victoria Police's use of her as reprehensible.

The board focused on six cases in which Ms Gobbo acted against the interest of her clients, including drug boss Tony Mokbel.

Justice Forbes stopped short of detailing how Ms Gobbo affected the case of Mokbel, who has an appeal afoot over Ms Gobbo’s involvement as both lawyer and informer in his case.

The other cases included a drug manufacturer who told Ms Gobbo about the general location of his laboratory before she handed the information to police and continued to represent him.

"She suggested to Victoria Police that her client was a good candidate to give evidence against another of her clients, Milad Mokbel [Tony’s brother]," Justice Forbes said.

In another case, that of Frank Ahec, Ms Gobbo reviewed the brief of evidence that police were proposing to serve on him to ensure her informer role was not disclosed, according to Wednesday’s judgment.

In another, she told her handlers about the fears and weaknesses of a man arrested for dealing MDMA and then represented him at an application to vary his bail conditions.

The relationship between lawyer and client, Justice Forbes said, was fundamentally based on loyalty to a client’s interest, holding the confidence of a client’s information, and a duty to avoid conflicts.

Justice Forbes said Ms Gobbo also failed, when she applied to become a lawyer, to disclose all information relating to her arrest for drugs when she was a university student.

It comes after the Court of Appeal quashed a second conviction over the scandal, acquitting Zlate Cvetanovski of drug trafficking on Friday after it found a substantial miscarriage of justice had occurred in his case.