DEDICATION OF THE SHRINE OF REMEMBRANCE

PERFORMED BY THE DUKE OF GLOUCESTER 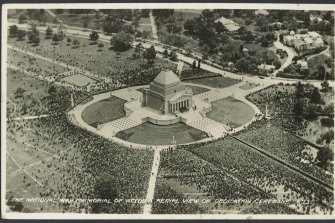 Aerial view of the dedication ceremony in 1934.Credit:State Library of Victoria

Distinguished Visitors From All Parts Of The Empire

In what is probably the most notable and profound expression of community ritual experienced in the history of Australia, Victoria’s war memorial, The Shrine of Remembrance in the Domain, was dedicated yesterday by Prince Henry, Duke of Gloucester.

From the earliest hours former soldiers of the A.I.F. and citizens assembled in and around enclosures at the Shrine, the sun shone fitfully from masses of cloud, and by three minutes to eleven on the eleventh day of the eleventh month, Armistice Day, 317,500 people stood alert as the bugles and trumpets sounded a warning “G.” At 11 o’clock a gun was fired to indicate the solemn hour of world armistice sixteen years ago. This great crowd then stood hushed for three minutes, heads bowed, tears in many eyes, until the melancholy sound of the Last Post was followed by a Reveille rousing the mass from its simple act of worship to the consciousness of new and bracing life.

The Dedication Ceremony, which followed, was opened with the singing of the Old Hundredth, a prayer, and brief speeches by Sir H. Chauvel and the Premier, who read Rudyard Kipling’s ode, specially written by the British poet for the historic occasion. In the course of his dedication speech, the Duke said: “This noble Shrine is not only intended as a symbol to be seen by all who come to this great city, but as a reminder also that the sacrifice of these men and women lays a duty on us who follow them.”

At the head of an impressive cortege, guarded by A.I.F. and regimental color parties, the Due entered the Inner Sanctuary of the Shrine and laid the first wreath, from the King, and the Rock of Remembrance. Wreaths of international and Empire significance were also placed in the Sanctuary, and throughout the day constant streams of people visited the memorial. From dusk till midnight, floodlights made of this magnificent structure a monument beautiful in its austerity. It will continue to be illuminated every night of the year.

AN EXPRESSION OF COMMUNITY RITUAL

MEANING OF THE SHRINE

Accustomed to the magnificent massing of soldiers and civilians every Anzac day, the people of Victoria little realised what an historically notable occasion the dedication of the Shrine of Remembrance on Sunday, 11th November, 1934 – Armistice day – would prove. The concentration yesterday of hundreds of thousands of people on the Domain to mark the completion of a memorial, which has taken seven years to build, was inspiring tribute to the immortal men of this State who gave Australia dignity in nationhood. On Armistice day the memory of the dead is even more alive than that of the living. Years of universal heroism, 1914 to 1918, are recalled with a pride tempered by the sorrow of a lasting grief. But once more we strive to fulfil the same prediction of C. H. Sorley, the young English poet, who made the supreme sacrifice at Loos, when he wrote of our attitude towards our racial enemies:

“We’ll grasp firm hands and laugh at the old pain. When it is peace.”

The essence of the occasion yesterday was the dedication ceremony performed by the Duke of Gloucester. As the cortege arrived, which from an avenue of fixed bayonets stretching from Domain Road to the approaches, marching slowly in procession round the western pavement of the Shrine to enter the Inner Sanctuary, the crowd became petrified in that solemnity of thought and spirit commingling death with life. Overhead the drone of planes could be heard, but as a gun boomed out on the stroke of 11 o’clock the great concourse fell into an awed silence, terrifying, profound, sacred.

A single gunshot, two warning notes on the trumpet. Then the two minutes’ silence, when every head was bowed. Thought long and dolorous passed through the mind in these moments when above all others we commune with those who did not come back. Buglers then sounded the Last Post, the last bugle call of the soldier’s day, the requiem of the dead. Then followed the cavalry reveille, emblematic of the dawning of a new day, of the victory over death, of resurrection. To infantrymen this bugle call is not well known, though most have heard it in camp. The popular ditty that accompanies it begins, “Soldiers arise, and put your armor on,” words not inappropriate to an occasion of solemnity.