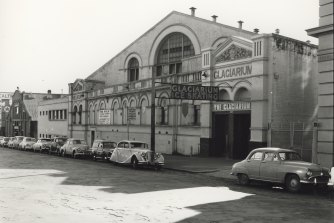 View from across street of the Glaciarium c. 1930-1949.Credit:Harold Paynting Collection, State Library of Victoria

The renowned landmark burned fiercely and was reduced to a charred shell in an hour as about 1200 people watched the blaze.

Firemen risked their lives fighting the fire and preventing it from spreading to nearby buildings.

Most of the original furniture was destroyed.

The building is owned by Australian Paper Manufacturers Ltd. 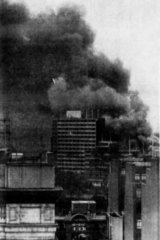 This picture taken from the roof of “The Age”, shows smoke billowing over city buildings shortly after the fire started.Credit:The Age Archives

It started in the ceiling of the stadium, near the rear entrance in Bright Street.

Mr Alan Evans, 29, of Duke Street, East Melbourne, saw smoke pouring from a window while doing fire duty at the A.P.M. works across the street.

Mr Evans said: “I ran and opened the double doors to find the place well alight. Flames were creeping along the ceiling. I dashed back into the office and telephoned the brigade.

“When I returned the whole ceiling was aglow and thick black smoke was pouring from the windows and roof.”

When firemen arrived the old timber-and-brick building was well ablaze.

Firemen burst open the doors and raced up ladders to play hoses at the seat of the fire, but the high ceiling made their job difficult.

The Chief Fire Officer (Mr W. T. Aldridge) said the firefighting team was forced from inside when the roof structure threatened to collapse.

Water was poured into the burning stadium from nine points, with one man perched 80 feet up on the brigade’s combination ladder.

The Glaciarium was erected in 1906 and until 1959 was a popular amusement centre.

The stadium was used as an ice skating rink for many years.

It was brought by the City Land and Development Company in 1959 for £135,000 to be demolished for new development.